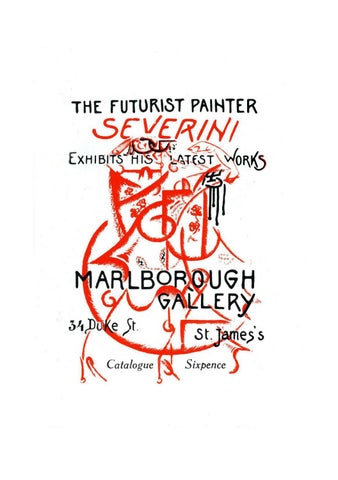 On selling his interest in

has purchased the Lease of

0 COMMISSIONS EXECUTED IN THE SALE ROOMS.

has been my aim while remaining within the domain of the plastic, to realise, in the paintings and drawings which I am exhibiting, forms which partake more and more of the nature of the abstract. This need for abstraction and for symbols is a characteristic sign of that intensity and rapidity with which life is lived to-day. It often happens that a word, a phrase, will serve to synthetize a complete action, an entire psychology. In the same way, one gesture, one essential feature, may, by suddenly throwing light upon our intuition, succeed in presenting to our vision the total reality. " To perceive," says Bergson, " is, after all, nothing more than an opportunity to remember." This is what I understand by " plastic perception " :â&#x20AC;&#x201D; The perception of an object in space is the result of the recollection which is retained of the object itself in its various aspects and in its various symbols. It must not be considered in its inmost nature, in its integral value, since we perceive it as a fleeting and complex continuity. Things possess neither integral form nor individual outlines. Our perception bestows on objects boundaries in space, and these boundaries are the outcome of the multiple influences of remembrance, of ambience, and of emotion. These three factors cause us to perceive matter, mass, and the integral value of objects in a manner which is entirely other than that in which scientific analysis shows them to us. It is light which determines the value of forms and colours. 3

One object does not leave off where another begins, but the lines and planes which constitute the one influence the lines and planes of the other. The desire to regard things as entirely isolated from one another belongs to analysis. W e remain thereby within the realm of the relative, in the domain of scientific experience. A simple, plastic expression of lines and planes has been defined as " Platonic Art." But since it is not the world of the intelligence, but rather the dynamic world of the senses, which is revealed to the painter, there exists no such thing as Platonic Art. Our modern complexity prevents us from being satisfied with a pictural and anecdotal expression. Moreover, the mechanical processes of photography form an admirable substitute in this respect for the analytical realisations of our great painters. The time has gone by when the painter painted as the bird sings. It is by his intuition that he is penetrating nowadays into the life, the soul, the activity of things. Art is now, before everything else, perception, and expression. It has been said that " Art is Nature seen through the medium of mind." This is perhaps but another method of expressing the same idea. We are unfairly accused of severing all connection with tradition. The force with which we rid ourselves of the yoke of the Past and our hatred of that Past, do not prevent our recognizing brethren in every great epoch through which Art has passed. Every expression of Art which possesses true depth bears a natural connection with tradition. W e must come to an understanding as to this word " tradition." There is, to my mind, but one artistic tradition among the painters of the W e s t : that of Italy. 4

It is to the Italian tradition that the most advanced painters of our day, from Cezanne to the Cubists, are attached. Whether in the work of Greco, Rembrandt, or Ribera, the solidity of the modelling, the aristocratic sobriety of tones, and the balance of values are altogether Italian. Delacroix, too, is Italian and, therefore, the Impressionists likewise. This, in short, is the conception of Futurist Painting. Painting will no longer translate some spectacle (Anecdote) or the outward semblance of some person who has been given an expression either of gaiety or sadness (Literature or Psychology), and will no longer limit itself to the simple pursuit of arabesques upon a plane (Matisse), or of mass (the Cubists), but by means of abstract forms will give the pictural rhythm of an ideal world. A picture should be a world in itself; this world is the result of a direct vision of reality, freed by the artist of all purely exterior symbols and all conventional generalities. So long as education and habit allow the public to look at a picture without thought of exterior realities, it will make no further endeavour to see what the picture possesses in common with those realities; it will not trouble itself as to what the picture represents, but it will be influenced b y the purely pictural charm of its form and colour. W e asserted in our technical manifesto that " We shall no longer give a fixed moment in universal dynamism, but the dynamic movement itself." Our idea has not met with comprehension. It has been remarked that we have paid especial attention to the rendering of motion (dancers, motor-cars, racehorses, and so on), and it was thought that the word, "dynamism," stood for "displacement," and it was taken for granted that our efforts were tending towards the attainment of that 5

which has been already realised through the medium of the cinematograph. This interpretation is both false and absurd. Synthesis will never be reached by the path of analysis. While the cinematograph is an analysis of movement, our art is, on the other hand, a synthesis. In the realm of Art, everything, emotion as well as perception, is a matter of synthesis. The same applies to those individuals and objects which arouse our emotion and exercise our perception. Among these we include Nature, human beings, life in general, and inanimate things. W e use the word dynamism, in the sense of " continuance " as well as in that of " displacement," which is necessarily included in it. We choose to concentrate our attention on things in motion because our modern sensibility is particularly qualified to grasp the idea of speed. Heavy, powerful motor-cars rushing through the crowded streets of our cities, dancers reflected in the fairy ambience of light and colour, aeroplanes flying above the heads of an excited throng . . . These sources of emotion satisfy our sense of the lyric and dramatic universe, better than do two pears and an apple. W e have been reproached with being literary. Nothing is more unjustifiable. Our Art is a pure exaltation of form and colour, by means of which the plastic universe is revealed to us. If, nevertheless, musical rhythms, or a metaphysical or a literary idea, are evolved from our pictural expression, so much the better, for this establishes the complexity of our Art. While remaining, before all else, a painter, I do not, for my part, refrain from feeling instinctively drawn towards a plastic whole in which a musical rhythm accompanies the arabesque of lines and planes. 6

Spanish Dancers at The Monico.

I believe that every sensation may be rendered in the plastic manner. Noise and sounds enter into the element, " ambience," and may be translated through forms. The word " ambience" implies the word "atmosphere." We render plastically the displacement of a body in atmosphere as well as that atmosphere itself. The Impressionists, in painting the atmosphere surrounding a body, have set the problem ; we are working out the solution. This, on broad lines, is the aesthetic creed of Futurist Painting. I trust that this simple explanation may assist the public to understand the works which I am exhibiting. It will hardly be surprising if no rules as to the manner in which a head or a chair should be painted are to be found therein. Since the forms which we perceive in space, and which our sensibility apprehends, undergo incessant change and renewal, how are we to determine beforehand the manner in which these forms should be plastically expressed ? It is by abandoning objective reality that our Futurist painter arrives at abstract and subjective expression Gino

CATALOGUE. PAINTINGS. 1. The Motor Bus. It has been my endeavour to produce by means of lines and planes the rhythmic sensation of speed, of spasmodic motion, and of deafening noise. The heavy vehicle pursues its headlong career from Montmartre to Montrouge along the crowded streets of Paris, dashing across the path of other motors, grazing their very wheels and hurling itself in the direction of the houses. " The houses enter the motor-bus, the motorbus enters the houses." (Technical Manifesto of Futurist Painting.)

2. The Nord-Sud Railway. The idea of the speed with which a lighted body spins through dark or lighted tunnels, is conveyed by means of colours, tones and forms. The great notice boards placarded in the stations enter the compartments in motion. The letters written on the placards act upon the memory through their literary significance at the same time as they act upon the eyes by means of their colour. 8

A Spanish Dancer at the Tabarin.

3. A Dancer at Pigal's. The circular rhythmic movement of a dancer, the folds of whose dress are held out by means of a hoop. These folds preserve their exterior form, modified in a uniform manner through the rotary movement. In order the better to convey the notion of relief, I have attempted to model the essential portions in a manner which is almost sculptural. Light and ambience act simultaneously on the forms in movement.

4. Spanish Dancers at the Monico. Musical rhythm accompanies the arabesque of lines and planes, the harmony of tones and values. Light, translated through abstract forms, now and then breaks into the rhythm.

5. The Bear Dance at the Moulin Rouge. Displacement of bodies in atmosphere. Two persons form but one plastic unity, rhythmically balanced.

The FĂŞte at Monbnartre. My object has been to convey the sensation of a body, lighted by electric lamps and gyrating in the darkness of the Boulevard. The shapes of the pink pigs and of the women seated on them are the subordinate factors of the whole, whose rotary movement they follow while undergoing displacement from head to foot and vice-versa.

DRAWINGS. 7. The Motor-Bus. 8. The Nord-Sud Railway. 9. The Nord-Sud Railway. 10. A Dancer at the Tabarin. 11. Mlle. Sahary-Djheli in the Prohibited Dance. 12. The Motor-Bus. 13. A Dancer at the Grelot. 14. The Terrace of a " Pub " at Montmartre. 15. The FĂŞte at Montmartre. 16. A Spanish Dancer at the Tabarin. These drawings illustrate the pursuit of form, of balance of values, and of movement. Each drawing is an objective study, an effort in the direction of synthesis and the absolute. I consider the Plastic Absolute to be the communion, the sympathy which exists between ourselves, the centre of things and things themselves. " The spectator must be placed in the centre of the picture." (Technical Manifesto of Futurist Painting.) 10

Georgette of the Folies Bergères. Georgette Reading. Lily of the Moulin Rouge. Suzanne of the Grelot. A Tzigane playing the Guitar. Portrait of the Artist. Portrait of Mlle. Jeanne Paul Fort. A Spanish Dancer. Still Life. Still Life. An overpowering need for abstraction has driven me to put on one side all realisation of mass and of form in the sense of pictural relief. By the simple indication of values and of mass I have arrived at arabesque. The indication of form and colour should give us the total reality. These drawings are plastic rhythms.

29. Portrait of Mlle. Gabrielle Alavoine of the OpĂŠra Comique. 30. The Bear Dance. The same abstraction and the same pursuit of arabesque and of rhythm, but remaining to a greater extent within the realm of pictural and plastic realisation.

These Galleries can be rented for approved exhibitions.

THE MARLBOROUGH The Main Gallery

THE MARLBOROUGH The Central Gallery 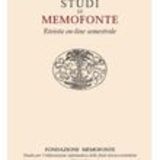