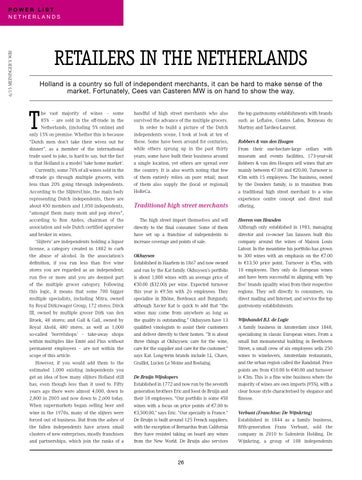 RETAILERS IN THE NETHERLANDS Holland is a country so full of independent merchants, it can be hard to make sense of the market. Fortunately, Cees van Casteren MW is on hand to show the way.

he vast majority of wines – some 85% – are sold in the off-trade in the Netherlands, (including 5% online) and only 15% on premise. Whether this is because “Dutch men don’t take their wives out for dinner”, as a member of the international trade used to joke, is hard to say, but the fact is that Holland is a model ‘take home market’. Currently, some 70% of all wines sold in the off-trade go through multiple grocers, with less than 20% going through independents. According to the SlijtersUnie, the main body representing Dutch independents, there are about 450 members and 1,050 independents, “amongst them many mom and pop stores”, according to Ron Andes, chairman of the association and sole Dutch certified appraiser and broker in wines. ‘Slijters’ are independents holding a liquor license, a category created in 1882 to curb the abuse of alcohol. In the association’s definition, if you run less than five wine stores you are regarded as an independent; run five or more and you are deemed part of the multiple grocer category. Following this logic, it means that some 700 bigger multiple specialists, including Mitra, owned by Royal Dirkzwager Group, 172 stores; Dirck III, owned by multiple grocer Dirk van den Broek, 48 stores; and Gall & Gall, owned by Royal Ahold, 480 stores, as well as 1,000 so-called ‘borrelshops’ – take-away shops within multiples like Emté and Plus without permanent employees – are not within the scope of this article. However, if you would add them to the estimated 1,000 existing independents you get an idea of how many slijters Holland still has, even though less than it used to. Fifty years ago there were almost 4,000, down to 2,800 in 2005 and now down to 2,600 today. When supermarkets began selling beer and wine in the 1970s, many of the slijters were forced out of business. But from the ashes of the fallen independents have arisen small clusters of new enterprises, mostly franchises and partnerships, which join the ranks of a

handful of high street merchants who also survived the advance of the multiple grocers. In order to build a picture of the Dutch independents scene, I took at look at ten of these. Some have been around for centuries, while others sprung up in the past thirty years; some have built their business around a single location, yet others are spread over the country. It is also worth noting that few of them entirely relies on pure retail; most of them also supply the (local or regional) HoReCa.

Traditional high street merchants The high street import themselves and sell directly to the final consumer. Some of them have set up a franchise of independents to increase coverage and points of sale. Okhuysen Established in Haarlem in 1867 and now owned and run by the Kat family. Okhuysen’s portfolio is about 1,000 wines with an average price of €30.00 ($32.00) per wine. Expected turnover this year is €9.5m with 26 employees. They specialise in Rhône, Bordeaux and Burgundy, although Xavier Kat is quick to add that “the wines may come from anywhere as long as the quality is outstanding.” Okhuysen have 13 qualified vinologists to assist their customers and deliver directly to their homes. “It is about three things at Okhuysen: care for the wine, care for the supplier and care for the customer,” says Kat. Long-term brands include J.L. Chave, Graillot, Lucien Le Moine and Rostaing. De Bruijn Wijnkopers Established in 1772 and now run by the seventh generation brothers Eric and Joost de Bruijn and their 18 employees. “Our portfolio is some 450 wines with a focus on price points of €7.00 to €3,500.00,” says Eric. “Our specialty is France.” De Bruijn is built around 125 French suppliers; with the exception of Bernardus from California they have resisted taking on board any wines from the New World. De Bruijn also services

the top gastronomy establishments with brands such as Leflaive, Comtes Lafon, Bonneau du Martray and Tardieu-Laurent. Robbers & van den Hoogen From their one-hectare-large cellars with museum and events facilities, 173-year-old Robbers & van den Hoogen sell wines that are mainly between €7.00 and €20.00. Turnover is €3m with 15 employees. The business, owned by the Donders family, is in transition from a traditional high street merchant to a wine experience centre concept and direct mail offering. Heeren van Heusden Although only established in 1983, managing director and co-owner Jan Janssen built this company around the wines of Maison Louis Latour. In the meantime his portfolio has grown to 300 wines with an emphasis on the €7.00 to €13.50 price point. Turnover is €5m, with 10 employees. They only do European wines and have been successful in aligning with ‘top five’ brands (quality wise) from their respective regions. They sell directly to consumers, via direct mailing and Internet, and service the top gastronomy establishments. Wijnhandel B.J. de Logie A family business in Amsterdam since 1848, specialising in classic European wines. From a small but monumental building in Beethoven Street, a small crew of six employees sells 250 wines to winelovers, Amsterdam restaurants, and the urban region called the Randstad. Price points are from €10.00 to €40.00 and turnover is €3m. This is a fine wine business where the majority of wines are own imports (95%), with a clear house style characterised by elegance and finesse. Verbunt (Franchise: De Wijnkring) Established in 1844 as a family business, fifth-generation Frans Verbunt, sold the company in 2010 to Salentein Holding. De Wijnkring, a group of 108 independents 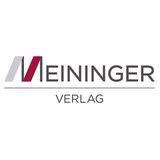