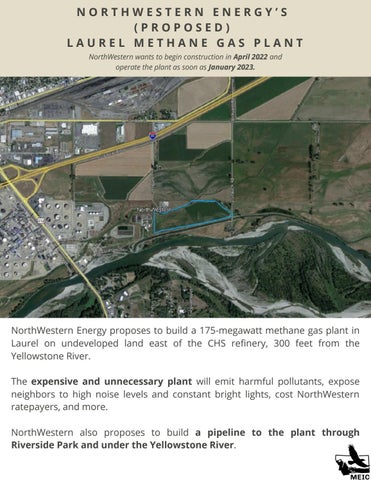 NorthWestern Energy proposes to build a 175-megawatt methane gas plant in Laurel on undeveloped land east of the CHS refinery, 300 feet from the Yellowstone River. The expensive and unnecessary plant will emit harmful pollutants, expose neighbors to high noise levels and constant bright lights, cost NorthWestern ratepayers, and more. NorthWestern also proposes to build a pipeline to the plant through Riverside Park and under the Yellowstone River.

WHAT&#39;S AT STAKE? Climate Harm. The Laurel Methane Gas Plant would emit 769,706 tons per year of climate-harming greenhouse gases, equivalent to the annual emissions of 167,327 passenger vehicles. High Costs. The Laurel Gas Plant would cost more than $250 million to build, which NorthWestern proposes to charge to its customers through increased electricity rates. If the project stays on budget, the average customer bill would increase by nearly $7/month for construction costs alone. In addition, customers would also pay for gas to power the facility. Gas prices have recently been extremely volatile, with NorthWestern paying more for gas during the single month of February 2021 than it paid through all of 2020 combined. DEQ’s Flawed Oversight. The Montana Environmental Policy Act requires state agencies to thoroughly analyze the environmental consequences of its decisions. DEQ’s review of the Laurel Methane Gas Plant was a cursory, 20page document that did not fully consider many of the above impacts. Two groups— MEIC and Sierra Club—have sued DEQ in state court in Billings, asking the court to overturn a key air permit necessary for the plant’s construction. Visual Impact. The Laurel Gas Plant would consist of 18 internal combustion engines. Each engine would require its own 77-foot-tall exhaust stack. The 18 stacks would be visible from I-90, the Yellowstone River, and Riverside Park. The facility will require lighting 24/7. Noise. The Montana Department of Environmental Quality (DEQ) estimated that noise from the Laurel Gas Plant would be up to 65 A-weighted decibels (dBa) 600 feet north and south of the facility, and would cause “steady noise” audible from Riverside Park. NorthWestern has not disclosed the noise impact on nearby residents. Health Impacts. The Laurel Gas Plant would emit hazardous air pollutants (including benzene, formaldehyde, and other harmful substances), nitrogen oxides, volatile organic compounds, carbon monoxide, sulfur dioxide, and particulate matter. These pollutants harm human health, particularly by aggravating respiratory illness. The Laurel area is already designated out-ofcompliance with federal health standards for sulfur dioxide, meaning it exceeds the allowed limits of pollution. The Laurel Gas Plant would add to this problem. CHECK MEIC&#39;S WEBSITE FOR THINGS YOU CAN DO: MEIC.ORG/ACTION-CENTER FOR MORE INFORMATION, CONTACT MELISSA NOOTZ: MNOOTZ@MEIC.ORG 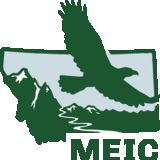