May 2018 issue of In Business Magazine 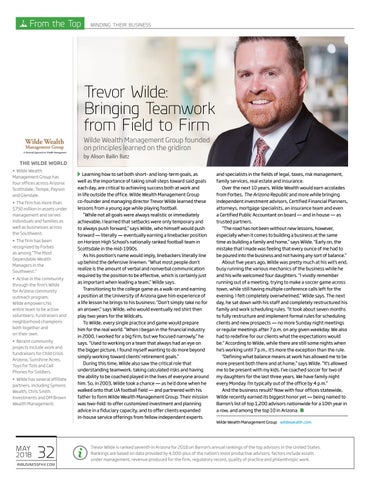 Trevor Wilde: Bringing Teamwork from Field to Firm Wilde Wealth Management Group founded on principles learned on the gridiron THE WILDE WORLD • Wilde Wealth Management Group has four offices across Arizona: Scottsdale, Tempe, Payson and Glendale. • The firm has more than $750 million in assets under management and serves individuals and families as well as businesses across the Southwest. • The firm has been recognized by Forbes as among “The Most Dependable Wealth Managers in the Southwest.” • Active in the community through the firm’s Wilde for Arizona community outreach program, Wilde empowers his entire team to be active volunteers, fundraisers and neighborhood champions both together and on their own. • Recent community projects include work and fundraisers for Child Crisis Arizona, Sunshine Acres, Toys for Tots and Cell Phones for Soldiers. • Wilde has several affiliate partners, including Symons Wealth, Chris Smith Investments and DM Brown Wealth Management.

Learning how to set both short- and long-term goals, as well as the importance of taking small steps toward said goals each day, are critical to achieving success both at work and in life outside the office. Wilde Wealth Management Group co-founder and managing director Trevor Wilde learned these lessons from a young age while playing football. “While not all goals were always realistic or immediately achievable, I learned that setbacks were only temporary and to always push forward,” says Wilde, who himself would push forward — literally — eventually earning a linebacker position on Horizon High School’s nationally ranked football team in Scottsdale in the mid-1990s. As his position’s name would imply, linebackers literally line up behind the defensive linemen. “What most people don’t realize is the amount of verbal and nonverbal communication required by the position to be effective, which is certainly just as important when leading a team,” Wilde says. Transitioning to the college game as a walk-on and earning a position at the University of Arizona gave him experience of a life lesson he brings to his business: “Don’t simply take no for an answer,” says Wilde, who would eventually red shirt then play two years for the Wildcats. To Wilde, every single practice and game would prepare him for the real world. “When I began in the financial industry in 2000, I worked for a big firm, but we focused narrowly,” he says. “Used to working on a team that always had an eye on the bigger picture, I found myself wanting to do more beyond simply working toward clients’ retirement goals.” During this time, Wilde also saw the critical role that understanding teamwork, taking calculated risks and having the ability to be coached played in the lives of everyone around him. So, in 2003, Wilde took a chance — as he’d done when he walked onto that UA football field — and partnered with his father to form Wilde Wealth Management Group. Their mission was two-fold: to offer customized investment and planning advice in a fiduciary capacity, and to offer clients expanded in-house service offerings from fellow independent experts

and specialists in the fields of legal, taxes, risk management, family services, real estate and insurance. Over the next 10 years, Wilde Wealth would earn accolades from Forbes, The Arizona Republic and more while bringing independent investment advisors, Certified Financial Planners, attorneys, mortgage specialists, an insurance team and even a Certified Public Accountant on board — and in house — as trusted partners. “The road has not been without new lessons, however, especially when it comes to building a business at the same time as building a family and home,” says Wilde. “Early on, the mistake that I made was feeling that every ounce of me had to be poured into the business and not having any sort of balance.” About five years ago, Wilde was pretty much at his wit’s end, busy running the various mechanics of the business while he and his wife welcomed four daughters. “I vividly remember running out of a meeting, trying to make a soccer game across town, while still having multiple conference calls left for the evening. I felt completely overwhelmed,” Wilde says. The next day, he sat down with his staff and completely restructured his family and work scheduling rules. “It took about seven months to fully restructure and implement formal rules for scheduling clients and new prospects — no more Sunday night meetings or regular meetings after 7 p.m. on any given weekday. We also had to redefine for our clients what the expectations would be.” According to Wilde, while there are still some nights when he’s working until 7 p.m., it’s more the exception than the rule. “Defining what balance means at work has allowed me to be more present both there and at home,” says Wilde. “It’s allowed me to be present with my kids. I’ve coached soccer for two of my daughters for the last three years. We have family night every Monday. I’m typically out of the office by 4 p.m.” And the business result? Now with four offices statewide, Wilde recently earned its biggest honor yet — being named to Barron’s list of top 1,200 advisors nationwide for a 10th year in a row, and among the top 10 in Arizona. Wilde Wealth Management Group wildewealth.com

Trevor Wilde is ranked seventh in Arizona for 2018 on Barron’s annual rankings of the top advisors in the United States. Rankings are based on data provided by 4,000-plus of the nation’s most productive advisors; factors include assets under management, revenue produced for the firm, regulatory record, quality of practice and philanthropic work.

May 2018 issue of In Business Magazine 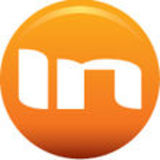