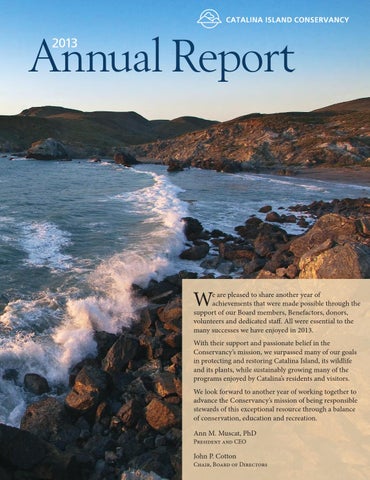 e are pleased to share another year of achievements that were made possible through the support of our Board members, Benefactors, donors, volunteers and dedicated staff. All were essential to the many successes we have enjoyed in 2013. With their support and passionate belief in the Conservancy’s mission, we surpassed many of our goals in protecting and restoring Catalina Island, its wildlife and its plants, while sustainably growing many of the programs enjoyed by Catalina’s residents and visitors. We look forward to another year of working together to advance the Conservancy’s mission of being responsible stewards of this exceptional resource through a balance of conservation, education and recreation. Ann M. Muscat, PhD President and CEO John P. Cotton

Chair, Board of Directors

1,852 FEDERALLY ENDANGERED Catalina Island foxes estimated to be on Catalina, up from approximately 100 in 1999, in one of the fastest recoveries of an endangered species

240 million PLANT SEEDS, many of rare and endemic species, now stored by the Conservancy

PLANTS GROWN AND MAINTAINED at the Ackerman Native Plant Nursery

people have completed Naturalist Training through the Conservancy, a milestone reached in 2013

INCREASE IN ONE YEAR

INDIVIDUAL INTERACTIONS WITH STUDENTS by the Education staff

46% INCREASE IN ONE YEAR

61,281 YOUTH CAMPERS enjoyed Conservancy-owned lands, and many of them participated in Stop the Spread, the Conservancy&#39;s invasive plant education and removal program for campers

2013 A Year of Accomplishments

The mission of the Catalina Island Conservancy is to be a responsible steward of its lands through a balance of conservation, education and recreation.

ff Contributions: Cash and goods donated to the Conservancy from a broad spectrum of

supporters, including individuals, foundations, governmental agencies, businesses and the net proceeds from the annual Conservancy Ball

managed by the Conservancy, including admissions to the Wrigley Memorial &amp; Botanic Garden; access to the Island’s interior via roads, campgrounds and the Airport in the Sky; educational tours, and various land, mooring and communications leases

ff Endowment Distribution: Funds distributed from the Conservancy endowment as

approved by the Benefactors and Board of Directors each year

of conservation, education and recreation, which included the cost to manage the Island’s ecological health through wildlife management and native and invasive plant programs; ecological literacy via communications and outreach, school-based and lifelong learning programs (including the Wrigley Memorial &amp; Botanic Garden and the Nature Centers at Avalon Canyon and the Airport in the Sky); experiences with the wild via visitor services such as Jeep® Eco Tours, hiking, biking, camping and airport access, and management of the Conservancy’s volunteer program

Conservancy assets, including those that provide access to the approximately 42,000 acres managed by the Conservancy (roads, trails, rangers, facilities, equipment and vehicle fleet)

2013 spending was augmented by nearly $400,000 in restricted-use, multi-year donations and grants received in prior years but not reflected in current year sources of funding. Cover photo by Jack Baldelli

The Catalina Island Conservancy was seeking an engaging and exciting new way to tell the story of its work in its Annual Report. We created this 4-page report with an infographic and inserted it into the organization's magazine to get wider distribution to its supporters, members and more. 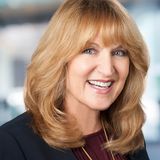