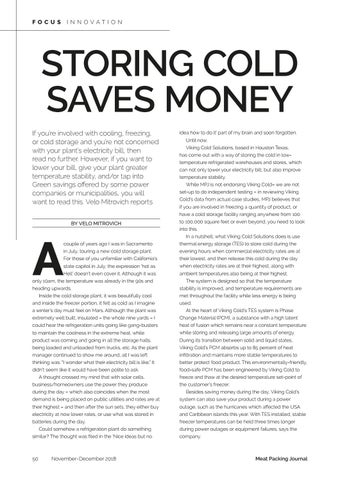 Storing cold saves money If you’re involved with cooling, freezing, or cold storage and you’re not concerned with your plant’s electricity bill, then read no further. However, if you want to lower your bill, give your plant greater temperature stability, and/or tap into Green savings offered by some power companies or municipalities, you will want to read this. Velo Mitrovich reports

idea how to do it’ part of my brain and soon forgotten. Until now. Viking Cold Solutions, based in Houston Texas, has come out with a way of storing the cold in lowtemperature refrigerated warehouses and stores, which can not only lower your electricity bill, but also improve temperature stability. While MPJ is not endorsing Viking Cold– we are not set-up to do independent testing – in reviewing Viking Cold’s data from actual case studies, MPJ believes that if you are involved in freezing a quantity of product, or have a cold storage facility ranging anywhere from 100

to 100,000 square feet or even beyond, you need to look into this. In a nutshell, what Viking Cold Solutions does is use

couple of years ago I was in Sacramento

thermal energy storage (TES) to store cold during the

evening hours when commercial electricity rates are at

For those of you unfamiliar with California’s

their lowest, and then release this cold during the day

state capitol in July, the expression ‘hot as

when electricity rates are at their highest, along with

Hell’ doesn’t even cover it. Although it was

ambient temperatures also being at their highest.

only 10am, the temperature was already in the 90s and heading upwards. Inside the cold storage plant, it was beautifully cool and inside the freezer portion, it felt as cold as I imagine

The system is designed so that the temperature stability is improved, and temperature requirements are met throughout the facility while less energy is being used.

a winter’s day must feel on Mars. Although the plant was

At the heart of Viking Cold’s TES system is Phase

Change Material (PCM), a substance with a high latent

heat of fusion which remains near a constant temperature

to maintain the coolness in the extreme heat, while

while storing and releasing large amounts of energy.

product was coming and going in all the storage halls,

During its transition between solid and liquid states,

being loaded and unloaded from trucks, etc. As the plant

Viking Cold’s PCM absorbs up to 85 percent of heat

manager continued to show me around, all I was left

thinking was: “I wonder what their electricity bill is like.” It

didn’t seem like it would have been polite to ask.

food-safe PCM has been engineered by Viking Cold to

A thought crossed my mind that with solar cells, business/homeowners use the power they produce during the day – which also coincides when the most

freeze and thaw at the desired temperature set-point of the customer’s freezer. Besides saving money during the day, Viking Cold’s

demand is being placed on public utilities and rates are at

system can also save your product during a power

their highest – and then after the sun sets, they either buy

outage, such as the hurricanes which affected the USA

electricity at now lower rates, or use what was stored in

and Caribbean islands this year. With TES installed, stable

batteries during the day.

Could somehow a refrigeration plant do something similar? The thought was filed in the ‘Nice ideas but no

during power outages or equipment failures, says the company.

Global data and analysis for the meat processing and export industry