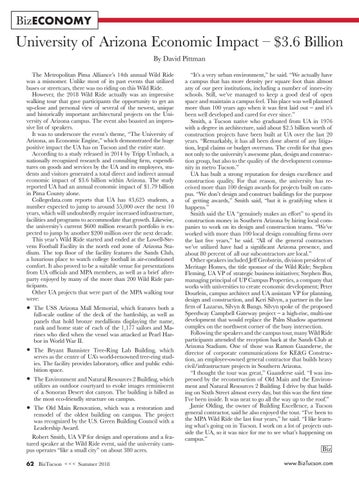 University of Arizona Economic Impact – $3.6 Billion By David Pittman The Metropolitan Pima Alliance’s 14th annual Wild Ride was a misnomer. Unlike most of its past events that utilized buses or streetcars, there was no riding on this Wild Ride. However, the 2018 Wild Ride actually was an impressive walking tour that gave participants the opportunity to get an up-close and personal view of several of the newest, unique and historically important architectural projects on the University of Arizona campus. The event also boasted an impressive list of speakers. It was to underscore the event’s theme, “The University of Arizona, an Economic Engine,” which demonstrated the huge positive impact the UA has on Tucson and the entire state. According to a study released in 2014 by Tripp Umbach, a nationally recognized research and consulting firm, expenditures on goods and services by the UA and its employees, students and visitors generated a total direct and indirect annual economic impact of $3.6 billion within Arizona. The study reported UA had an annual economic impact of $1.79 billion in Pima County alone. Collegedata.com reports that UA has 43,625 students, a number expected to jump to around 55,000 over the next 10 years, which will undoubtedly require increased infrastructure, facilities and programs to accommodate that growth. Likewise, the university’s current $600 million research portfolio is expected to jump by another $200 million over the next decade. This year’s Wild Ride started and ended at the Lowell-Stevens Football Facility in the north end zone of Arizona Stadium. The top floor of the facility features the Sands Club, a luxurious place to watch college football in air-conditioned comfort. It also proved to be a suitable venue for presentations from UA officials and MPA members, as well as a brief afterparty enjoyed by many of the more than 200 Wild Ride participants. Other UA projects that were part of the MPA walking tour were: The USS Arizona Mall Memorial, which features both a full-scale outline of the deck of the battleship, as well as panels that hold bronze medallions displaying the name, rank and home state of each of the 1,177 sailors and Marines who died when the vessel was attacked at Pearl Harbor in World War II. The Bryant Bannister Tree-Ring Lab Building, which serves as the center of UA’s world-renowned tree-ring studies. The facility provides laboratory, office and public exhibition space. The Environment and Natural Resources 2 Building, which utilizes an outdoor courtyard to evoke images reminiscent of a Sonoran Desert slot canyon. The building is billed as the most eco-friendly structure on campus. The Old Main Renovation, which was a restoration and remodel of the oldest building on campus. The project was recognized by the U.S. Green Building Council with a Leadership Award. Robert Smith, UA VP for design and operations and a featured speaker at the Wild Ride event, said the university campus operates “like a small city” on about 380 acres.

“It’s a very urban environment,” he said. “We actually have a campus that has more density per square foot than almost any of our peer institutions, including a number of inner-city schools. Still, we’ve managed to keep a good deal of open space and maintain a campus feel. This place was well planned more than 100 years ago when it was first laid out – and it’s been well developed and cared for ever since.” Smith, a Tucson native who graduated from UA in 1976 with a degree in architecture, said about $2.5 billion worth of construction projects have been built at UA over the last 20 years. “Remarkably, it has all been done absent of any litigation, legal claims or budget overruns. The credit for that goes not only to the university’s awesome plan, design and construction group, but also to the quality of the development community in metro Tucson.” UA has built a strong reputation for design excellence and construction quality. For that reason, the university has received more than 100 design awards for projects built on campus. “We don’t design and construct buildings for the purpose of getting awards,” Smith said, “but it is gratifying when it happens.” Smith said the UA “genuinely makes an effort” to spend its construction money in Southern Arizona by hiring local companies to work on its design and construction teams. “We’ve worked with more than 100 local design consulting firms over the last five years,” he said. “All of the general contractors we’ve utilized have had a significant Arizona presence, and about 80 percent of all our subcontractors are local.” Other speakers included Jeff Grobstein, division president of Meritage Homes, the title sponsor of the Wild Ride; Stephen Fleming, UA VP of strategic business initiatives; Stephen Bus, managing principal of UP Campus Properties, a company that works with universities to create economic development; Peter Dourlein, campus architect and UA assistant VP for planning, design and construction, and Keri Silvyn, a partner in the law firm of Lazarus, Silvyn &amp; Bangs. Silvyn spoke of the proposed Speedway Campbell Gateway project – a high-rise, multi-use development that would replace the Palm Shadow apartment complex on the northwest corner of the busy intersection. Following the speakers and the campus tour, many Wild Ride participants attended the reception back at the Sands Club at Arizona Stadium. One of those was Ramon Gaanderse, the director of corporate communications for KE&amp;G Construction, an employee-owned general contractor that builds heavy civil/infrastructure projects in Southern Arizona. “I thought the tour was great,” Gaanderse said. “I was impressed by the reconstruction of Old Main and the Environment and Natural Resources 2 Building. I drive by that building on Sixth Street almost every day, but this was the first time I’ve been inside. It was neat to go all the way up to the roof.” Jamie Olding, the owner of Building Excellence, a Tucson general contractor, said he also enjoyed the tour. “I’ve been to the MPA Wild Ride the last four years,” he said. “I like learning what’s going on in Tucson. I work on a lot of projects outside the UA, so it was nice for me to see what’s happening on campus.”