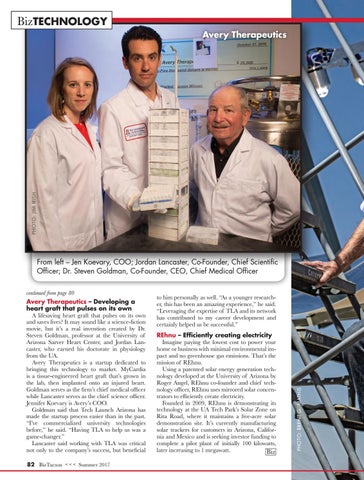 to him personally as well. “As a younger researcher, this has been an amazing experience,” he said. “Leveraging the expertise of TLA and its network has contributed to my career development and certainly helped us be successful.” REhnu – Efficiently creating electricity Imagine paying the lowest cost to power your home or business with minimal environmental impact and no greenhouse gas emissions. That’s the mission of REhnu. Using a patented solar energy generation technology developed at the University of Arizona by Roger Angel, REhnu co-founder and chief technology officer, REhnu uses mirrored solar concentrators to efficiently create electricity. Founded in 2009, REhnu is demonstrating its technology at the UA Tech Park’s Solar Zone on Rita Road, where it maintains a five-acre solar demonstration site. It’s currently manufacturing solar trackers for customers in Arizona, California and Mexico and is seeking investor funding to complete a pilot plant of initially 100 kilowatts, later increasing to 1 megawatt. Biz

continued from page 80 Avery Therapeutics – Developing a heart graft that pulses on its own A lifesaving heart graft that pulses on its own and saves lives? It may sound like a science-fiction movie, but it’s a real invention created by Dr. Steven Goldman, professor at the University of Arizona Sarver Heart Center, and Jordan Lancaster, who earned his doctorate in physiology from the UA. Avery Therapeutics is a startup dedicated to bringing this technology to market. MyCardia is a tissue-engineered heart graft that’s grown in the lab, then implanted onto an injured heart. Goldman serves as the firm’s chief medical officer while Lancaster serves as the chief science officer. Jennifer Koevary is Avery’s COO. Goldman said that Tech Launch Arizona has made the startup process easier than in the past. “I’ve commercialized university technologies before,” he said. “Having TLA to help us was a game-changer.” Lancaster said working with TLA was critical not only to the company’s success, but beneficial