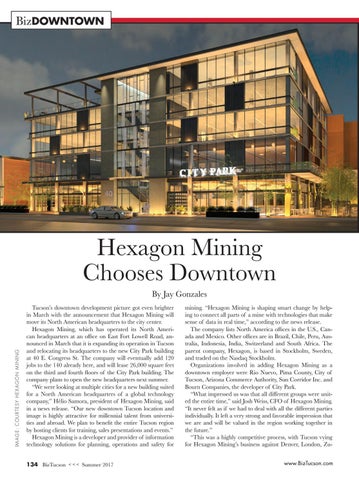 Tucson’s downtown development picture got even brighter in March with the announcement that Hexagon Mining will move its North American headquarters to the city center. Hexagon Mining, which has operated its North American headquarters at an office on East Fort Lowell Road, announced in March that it is expanding its operation in Tucson and relocating its headquarters to the new City Park building at 40 E. Congress St. The company will eventually add 120 jobs to the 140 already here, and will lease 26,000 square feet on the third and fourth floors of the City Park building. The company plans to open the new headquarters next summer. “We were looking at multiple cities for a new building suited for a North American headquarters of a global technology company,” Hélio Samora, president of Hexagon Mining, said in a news release. “Our new downtown Tucson location and image is highly attractive for millennial talent from universities and abroad. We plan to benefit the entire Tucson region by hosting clients for training, sales presentations and events.” Hexagon Mining is a developer and provider of information technology solutions for planning, operations and safety for 134 BizTucson

mining. “Hexagon Mining is shaping smart change by helping to connect all parts of a mine with technologies that make sense of data in real time,” according to the news release. The company lists North America offices in the U.S., Canada and Mexico. Other offices are in Brazil, Chile, Peru, Australia, Indonesia, India, Switzerland and South Africa. The parent company, Hexagon, is based in Stockholm, Sweden, and traded on the Nasdaq Stockholm. Organizations involved in adding Hexagon Mining as a downtown employer were Rio Nuevo, Pima County, City of Tucson, Arizona Commerce Authority, Sun Corridor Inc. and Bourn Companies, the developer of City Park. “What impressed us was that all different groups were united the entire time,” said Josh Weiss, CFO of Hexagon Mining. “It never felt as if we had to deal with all the different parties individually. It left a very strong and favorable impression that we are and will be valued in the region working together in the future.” “This was a highly competitive process, with Tucson vying for Hexagon Mining’s business against Denver, London, Zuwww.BizTucson.com