Why Industrial SaaS will become the most valuable business tool ever 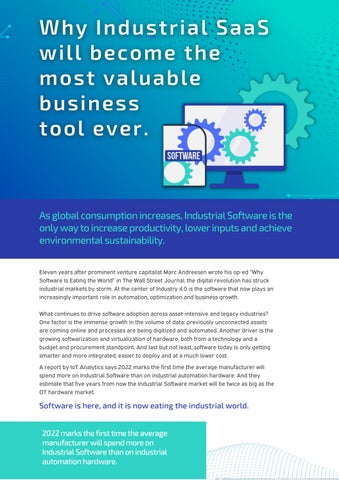 As global consumption increases, Industrial Software is the only way to increase productivity, lower inputs and achieve environmental sustainability. Eleven years after prominent venture capitalist Marc Andreesen wrote his op-ed “Why Software Is Eating the World” in The Wall Street Journal, the digital revolution has struck industrial markets by storm. At the center of Industry 4.0 is the software that now plays an increasingly important role in automation, optimization and business growth. What continues to drive software adoption across asset-intensive and legacy industries? One factor is the immense growth in the volume of data; previously unconnected assets are coming online and processes are being digitized and automated. Another driver is the growing softwarization and virtualization of hardware, both from a technology and a budget and procurement standpoint. And last but not least, software today is only getting smarter and more integrated, easier to deploy and at a much lower cost. A report by IoT Analytics says 2022 marks the first time the average manufacturer will spend more on Industrial Software than on industrial automation hardware. And they estimate that five years from now the Industrial Software market will be twice as big as the OT hardware market.

Software is here, and it is now eating the industrial world. 2022 marks the first time the average manufacturer will spend more on Industrial Software than on industrial automation hardware.

What is Industrial Software?

You may hear a number of different definitions–that’s not uncommon anytime a new trend emerges. We at McRock define the Industrial Software market as software companies that develop digital technologies to help big industries transform how they operate and address critical challenges for their workforce, assets, processes and business functions. Big industries within the McRock industrial theme include sectors such as supply chain, critical infrastructure and mobility, manufacturing, and energy. Have we mentioned the cloud yet? No conversation about Industrial Software will be complete without it. Cloud computing has become increasingly prevalent across verticals; and the Industrial Software of today has evolved from on-premise, clunky and centralized offering to a smart, distributed service model. No surprise then that Industrial Software is rapidly adopting the SaaS model and becoming its own category: Industrial SaaS. And when we look back into history, it is fascinating that the evolution of this seemingly new category has many interesting parallels with Enterprise SaaS.

Industrial Software is rapidly adopting the SaaS model and becoming its own category: Industrial SaaS.

A brief history of Enterprise SaaS The Enterprise SaaS industry took 40 years to get to its current form today: from the time the concept was first born pre-internet in the 1960s, to the boom of cloud infrastructure and proven successes of iconic players like Salesforce in the 2000s. The 20-year period from 2000 to 2020 was all about digitization. Many SaaS companies at the time focused on being one-stop shops for a broad range of business functions. The sales process followed a top-down approach, and most of the offerings were commercial off-the-shelf solutions.

2020 marked an inflection with lots of predictions on how SaaS 2.0 will look in the next ten years. Many people believe the new era of SaaS will be powered by AI – McRock happens to agree. Prognosticators also believe the industry will see a dominant trend of product-led and bottom-up approaches when it comes to sales strategy. And last but not least, SaaS 2.0 will be substantially more integrated, and SaaS applications will become more customizable.

The evolution of Industrial SaaS

So what about those parallels we mentioned? Like Enterprise SaaS, the Industrial SaaS space has been quietly building its infrastructure since the late 1980s. Legacy devices started to connect to the internet in 1999. And it took ten years for sensor prices to drop to a point where the IoT truly began to pick up in the 2010s. The period from 2004 to 2014 was when several enterprise SaaS unicorns were born. This was also when we saw the emergence of a new class of cloud-based or hybrid software that crossed the river into industrialuse cases; think energy management or industrial asset optimization. Incumbent Industrial Software players, such as PTC and AspenTech, began to grab promising assets during this early period; some examples include the acquisitions of Thingworx and Onshape by PTC, or Mtell and mnubo by AspenTech. In the last two years we’ve started to see proof of scale for Industrial SaaS, as companies like C3 ai reached the $100M revenue mark and went public. And in early 2022, the iconic deal between AspenTech and Emerson marked a significant milestone for the two companies and the space as a whole.

It’s now evident that large and long-standing stakeholders are stepping up in a big way to compete and grab market shares in Industrial SaaS.

The evolution of Industrial SaaS

The learnings of Enterprise SaaS are fueling the acceleration of Industrial SaaS Take for example the early adoption of AI-powered analytics in some industrial verticals. While some large enterprise SaaS companies, including Salesforce, didn’t start to embrace Big Data until Hadoop was created in 2005, C3.ai had already shifted to analytics before it went public. The modern enterprise Big Data and AI startups weren’t born until late in the Enterprise 1.0 phase, and yet we have seen many industrial AI companies start much earlier. One reason for this acceleration? The tremendous economic gain promised by analytics for the industrial sectors. Another is the industry is at a different maturity level when it comes to Big Data &amp; AI compared to the early 2000s. In fact, many of the new trends or technological advancements that have happened in the enterprise space post-Salesforce IPO, have seen their counterparts on the field level. Look at worker training and communication, Big Data operations, or AI/MLOps–all great examples of technologies that have been penetrating both worlds in almost the same timeframe.

Many of the new trends or technological advancements that have happened in the enterprise space post-Salesforce IPO, have seen their counterparts on the field level.

There’s no crystal ball, but we have a good idea of what’s on the horizon The pace of digital transformation still varies in the industrial space–that’s just the reality of any innovation. And we believe there will be a coexistence of both Enterprise SaaS 1.0 and 2.0 characteristics across different segments of the market. What will this coexistence look like? First, there will be a variety of systems of engagement, records and intelligence in the space. Vendors that succeed are those that will provide simple entry solutions but also the capability to grow with their clients as they prepare to adopt the next phase of technology adoption. Second, solutions that work out-of-the-box will remain appealing to many customers, but the platforms and the tools that can create customizable experiences at scale will also thrive. There’s room for everyone! And that last characteristic of this coexistence relates to go-to-market strategy. Instead of distinct traditional topdown or bottom-up approaches, the market will likely see a combination of both. Technology adoption will continue to happen through a lighthouse model–meaning Industrial Software will start with a specific location, plant or a small group of users before going enterprise-wide. Our theory is that big industries are at a tipping point, facing profound economic and technological challenges and opportunities, and their big advancements are being powered by Industrial Software. It doesn’t take a crystal ball to see the alignment of technological maturation, market demand and transformational culture shifts in the next ten years creating the best opportunities for companies and investors in this sector to invest, grow and achieve massive success. Our years of experience in navigating and succeeding in this space are certainly helping to make this vision clear.

If you are an entrepreneur building Industrial SaaS solutions, or an investor interested in the space, let’s connect. deals@mcrock.com

Big industries are at a tipping point, facing profound economic and technological challenges and opportunities, and their big advancements are being powered by Industrial Software.

Why Industrial SaaS will become the most valuable business tool ever 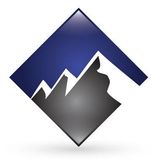