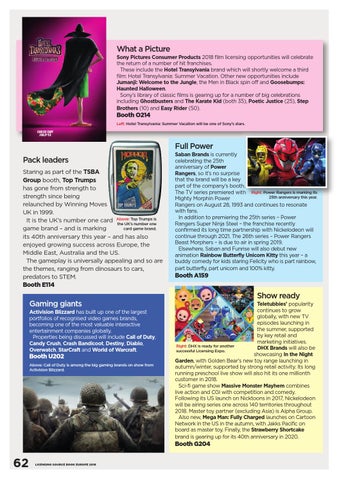 What a Picture Sony Pictures Consumer Products 2018 film licensing opportunities will celebrate the return of a number of hit franchises. These include the Hotel Transylvania brand which will shortly welcome a third film: Hotel Transylvania: Summer Vacation. Other new opportunities include Jumanji: Welcome to the Jungle, the Men in Black spin off and Goosebumps: Haunted Halloween. Sony’s library of classic films is gearing up for a number of big celebrations including Ghostbusters and The Karate Kid (both 35), Poetic Justice (25), Step Brothers (10) and Easy Rider (50).

Left: Hotel Transylvania: Summer Vacation will be one of Sony’s stars.

Full Power Pack leaders Staring as part of the TSBA Group booth, Top Trumps has gone from strength to strength since being relaunched by Winning Moves UK in 1999. Top Trumps is It is the UK’s number one card Above: the UK’s number one card game brand. game brand – and is marking its 40th anniversary this year – and has also enjoyed growing success across Europe, the Middle East, Australia and the US. The gameplay is universally appealing and so are the themes, ranging from dinosaurs to cars, predators to STEM. Booth E114

Saban Brands is currently celebrating the 25th anniversary of Power Rangers, so it’s no surprise that the brand will be a key part of the company’s booth. The TV series premiered with Right: Power Rangers is marking its 25th anniversary this year. Mighty Morphin Power Rangers on August 28, 1993 and continues to resonate with fans. In addition to premiering the 25th series – Power Rangers Super Ninja Steel – the franchise recently confirmed its long time partnership with Nickelodeon will continue through 2021. The 26th series – Power Rangers Beast Morphers – is due to air in spring 2019. Elsewhere, Saban and Funrise will also debut new animation Rainbow Butterfly Unicorn Kitty this year – a buddy comedy for kids staring Felicity who is part rainbow, part butterfly, part unicorn and 100% kitty.

Show ready Gaming giants Activision Blizzard has built up one of the largest portfolios of recognised video games brands, becoming one of the most valuable interactive entertainment companies globally. Properties being discussed will include Call of Duty, Candy Crush, Crash Bandicoot, Destiny, Diablo, Overwatch, StarCraft and World of Warcraft.

Above: Call of Duty is among the big gaming brands on show from Activision Blizzard.

Teletubbies’ popularity continues to grow globally, with new TV episodes launching in the summer, supported by key retail and marketing initiatives. Right: DHX is ready for another DHX Brands will also be successful Licensing Expo. showcasing In the Night Garden, with Golden Bear’s new toy range launching in autumn/winter, supported by strong retail activity. Its long running preschool live show will also hit its one millionth customer in 2018. Sci-fi game show Massive Monster Mayhem combines live action and CGI with competition and comedy. Following its US launch on Nicktoons in 2017, Nickelodeon will be airing series one across 140 territories throughout 2018. Master toy partner (excluding Asia) is Alpha Group. Also new, Mega Man: Fully Charged launches on Cartoon Network in the US in the autumn, with Jakks Pacific on board as master toy. Finally, the Strawberry Shortcake brand is gearing up for its 40th anniversary in 2020.