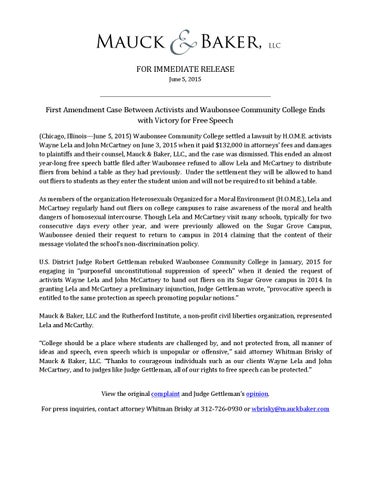 (Chicago, Illinois—June 5, 2015) Waubonsee Community College settled a lawsuit by H.O.M.E. activists Wayne Lela and John McCartney on June 3, 2015 when it paid $132,000 in attorneys’ fees and damages to plaintiffs and their counsel, Mauck &amp; Baker, LLC., and the case was dismissed. This ended an almost year-long free speech battle filed after Waubonsee refused to allow Lela and McCartney to distribute fliers from behind a table as they had previously. Under the settlement they will be allowed to hand out fliers to students as they enter the student union and will not be required to sit behind a table.

As members of the organization Heterosexuals Organized for a Moral Environment (H.O.M.E.), Lela and McCartney regularly hand out fliers on college campuses to raise awareness of the moral and health dangers of homosexual intercourse. Though Lela and McCartney visit many schools, typically for two consecutive days every other year, and were previously allowed on the Sugar Grove Campus, Waubonsee denied their request to return to campus in 2014 claiming that the content of their message violated the school’s non-discrimination policy.

U.S. District Judge Robert Gettleman rebuked Waubonsee Community College in January, 2015 for engaging in “purposeful unconstitutional suppression of speech” when it denied the request of activists Wayne Lela and John McCartney to hand out fliers on its Sugar Grove campus in 2014. In granting Lela and McCartney a preliminary injunction, Judge Gettleman wrote, “provocative speech is entitled to the same protection as speech promoting popular notions.” Mauck &amp; Baker, LLC and the Rutherford Institute, a non-profit civil liberties organization, represented Lela and McCarthy. “College should be a place where students are challenged by, and not protected from, all manner of ideas and speech, even speech which is unpopular or offensive,” said attorney Whitman Brisky of Mauck &amp; Baker, LLC. “Thanks to courageous individuals such as our clients Wayne Lela and John McCartney, and to judges like Judge Gettleman, all of our rights to free speech can be protected.” View the original complaint and Judge Gettleman’s opinion.

For press inquiries, contact attorney Whitman Brisky at 312-726-0930 or wbrisky@mauckbaker.com