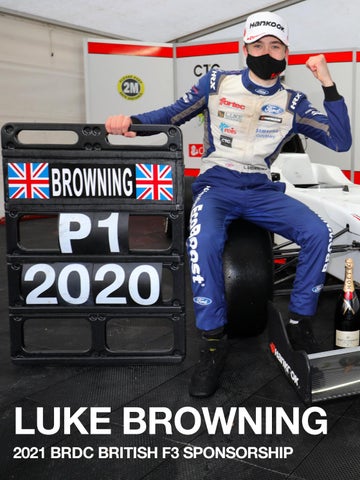 THE STORY SO FAR

uke Browning is one of the rising stars of the British racing scene and the reigning British F4 champion.

Based in Kingsley in Cheshire, Luke started his racing career at the age of just ten years old initially for fun until it became clear that he had the talent required to make it to the very top of the sport.

Having forged a successful career in karting, Luke took the step into car racing in the Junior Saloon Car Championship.

Although he faced his fair share of challenges when he first joined the grid, it didn’t take long for Luke’s undoubted speed to shine through and he was soon fighting for the top step of the podium.

A maiden race win didn’t take long to arrive, and with it some of the fastest laps ever seen in the series as he secured his place in the record books.

Junior Saloons would be just the first step however, and opened the door for the switch into the Ginetta Junior Championship; the premier series for junior drivers in British motorsport.

Championship support package, and with many more watching on live on ITV4, Luke’s reputation continued to grow as an ever greater number of people became aware of his talents.

Across two seasons in the series, Luke would go on to secure an impressive tally of 18 podium finishes - including eight wins - with his battling performances on track earning plenty of plaudits.

Third in the championship in his second season then opened the door for Luke to follow in the footsteps of a number of drivers who have used the Ginetta series as a springboard into single-seaters, with a move over to the British F4 Championship.

His debut race in the series would see Luke starting from near the back of the grid after a tricky qualifying session, but he bounced back in astonishing fashion when the lights went out.

Although already known as something of a wet weather expert, few expected Luke’s first single-seater race to unfold in the manner it did as he romped through the field to take victory with one of the most impressive performances ever seen in the series.

finishes and he would end his first season in the series with a top six championship finishes.

Showing how he had impressed on track over the course of the year, Luke would go on to be nominated for the prestigious Aston Martin Autosport BRDC Young Driver of the Year award, and was also a finalist in the Porsche GB Scholarship.

Electing to return to British F4 for a second season in 2020, Luke headed into the new campaign with one goal having inked a deal to join leading single-seater outfit Fortec Motorsports.

On the pace immediately with his new team, Luke was all set for the new campaign to get underway before the COVID-19 pandemic brought all racing to a halt.

As with a number of racers across the globe, Luke turned his hand to eSports to keep race ready before the on-track action was able to resume.

After a double podium in the delayed season opener at Donington Park, and again at Brands Hatch, Luke headed to his home event at Oulton Park chasing a first victory of the year -

and an astonishing performance on track saw him secure a rare hat-trick of wins, and with it, take the championship lead.

Two further wins followed at Knockhill and a sixth win of the campaign came at Snetterton as Luke then headed into the season finale dead level with his main rival in the points.

Victory in race one of the season finale was quickly followed by a second place finish in race two, and that gave Luke an advantage that he would retain through a dramatic third race as he wrapped up the coveted championship title.

Having added his name to an impressive list of drivers to have won the title in either British F4 or its predecessor Formula Ford, Luke will now take the step up the single-seater ladder for 2021 with a move into the British F3 Championship - a series won in the past by some of the biggest names in motorsport.

Remaining with former British F3 championship winners Fortec, Luke is sure to be one of the drivers to watch during the new season as he seeks to add to his impressive racing resume.

Running alongside the British GT Championship for seven events, and with one further stand-alone meeting, the 2021 season will see Luke compete in 28 races spread across those eight meetings.

Four meetings will be triple-headers similar to those seen in his British F4 programme in recent years, with the other four being quadruple-headers.

As well as some of the leading circuits in the UK, the British F3 calendar includes a round at Spa Francorchamps in Belgium - one of the most famous circuits in Europe.

Each race runs for a duration of 20 minutes, and weekends include a race that includes a full grid reversal - with bonus points on oﬀer for places gained.

A special award is also handed out after each season for the driver to have secured the most pole positions during the year.

The British F3 car features a carbon-fibre Tatuus chassis and 2-litre, 230bhp engine developed by Mountune and includes a revised

aerodynamic package that was upgraded in 2020 to increase downforce.

Plenty of work has also gone in to ensuring that the car meets - and exceeds - latest safety requirements, with an IndyCar-style fin in front of the cockpit to deflect any debris away from the driver.

Engines are sealed at the start of the year whilst drivers are limited in the number of tyres that can be used each weekend - making car set-up and experience vital in securing success on track.

The support of the British Racing Drivers’ Club (BRDC) is a key part of British F3, with drivers in the series eligible to join one of the various BRDC programmes geared towards helping young British drivers to make it all the way to Formula One.

As well as chasing success on track, drivers in British F3 are also eligible for the Sunoco Whelen Challenge, which is organised by fuel supplier Sunoco.

Since 2009, the winner of the Challenge has been placed in a seat at the famous Rolex 24 at Daytona, with past winners including IMSA Champion Felipe Nasr and factory Aston Martin GT driver Jonny Adam.

WHO ARE FORTEC MOTORSPORTS?

ounded in the late 1980s, Fortec Motorsports is firmly established as one of the leading single-seater outfits in British Motorsport, having enjoyed years of success both at home and abroad.

Owned by former racer Richard Dutton since 1995, Fortec has operated cars in a wide range of diďŹ&#x20AC;erent formula from British F4 and Formula BMW, right up to Formula Renault 3.5 and Formula 3000 - the predecessor to GP2/FIA Formula 2, and the tier below Formula 1.

Competing in such a diverse range of series means Fortec has been able to put together a team packed with an astonishing level of experience and expertise, enabling it to compete at the highest level year after year.

As a result, the team has been able to secure more than 300 race wins, has seen its drivers take over 1,000 podium finishes and has celebrated championship success on more than 30 occasions.

With a vision for engineering excellence at the pinnacle of motorsport, Fortec Motorsports operates solely as a race team with a focus on helping drivers to rise through the ranks becoming a stepping stone for a number of world famous names who have gone on to compete at the highest level.

It isnâ&#x20AC;&#x2122;t just on track where Fortec helps youngsters looking to forge a career in motorsport either, with a driver development programme in place that designed to prepare drivers on all fronts for what is required to compete at the highest very highest level.

here are a number of benefits that come from partnering up with Luke Browning - aside from the success that is guaranteed on track over the course of a racing season.

Having firmly established himself as one of the rising stars of British motorsport in recent seasons, Luke’s profile is such that he regularly benefits from an impressive amount of media coverage in the specialist press.

Extensive experience of dealing with the media as he has made his way through the motorsport ranks also means he is well versed in ensuring that his team and sponsors are represented in the best way possible.

Luke’s programme in BRDC British F3 will see him compete as one of the headline acts on a race weekend, with British F3/GT weekends attracting large audiences of passionate fans across the season

There is also the opportunity to showcase potential partners to a huge audience thanks to an enhanced broadcast package that combines live streaming with traditional TV coverage.

The majority of races will benefit from online coverage in full HD quality, and sit alongside a

highlights programme that is broadcast free-toair on ITV4.

Should anyone miss those highlights, the show is also made available on demand via the ITV Hub, and includes features and interviews with the leading drivers in the series.

TV coverage is produced by Hayfisher, one of the leading independent companies of its type in the UK and one that is well regarded for its work in the motorsport field.

With the possibility of using corporate hospitality on a BRDC British F3 race weekend for marketing purposes or to entertain corporate guests, supporting Luke Browning as he continues his rise up the motorsport ladder is a fantastic way in which to boost brand awareness or to open the door to new and untapped markets.

A wide range of diﬀerent packages are available for potential sponsors and partners that include branding on Luke’s car, race suit and website.

Sponsors will also benefit from Luke’s everincreasing reach on social media, where he is keen to interact with fans and to promote those sponsors who have played a key role in his success on track. 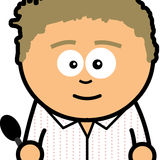