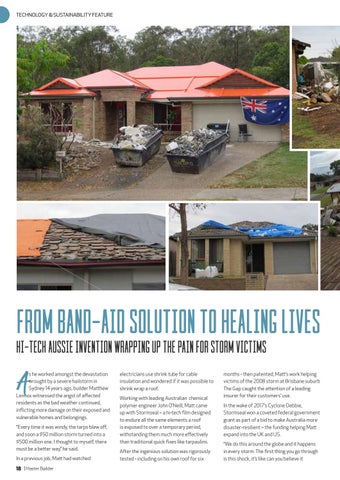 s he worked amongst the devastation wrought by a severe hailstorm in Sydney 14 years ago, builder Matthew Lennox witnessed the angst of affected residents as the bad weather continued, inflicting more damage on their exposed and vulnerable homes and belongings. “Every time it was windy, the tarps blew off, and soon a $50 million storm turned into a $500 million one. I thought to myself, there must be a better way,” he said. In a previous job, Matt had watched 18 | Master Builder

electricians use shrink tube for cable insulation and wondered if it was possible to shrink wrap a roof. Working with leading Australian chemical polymer engineer John O’Neill, Matt came up with Stormseal – a hi-tech film designed to endure all the same elements a roof is exposed to over a temporary period, withstanding them much more effectively than traditional quick fixes like tarpaulins. After the ingenious solution was rigorously tested - including on his own roof for six

months - then patented, Matt’s work helping victims of the 2008 storm at Brisbane suburb The Gap caught the attention of a leading insurer for their customers’ use. In the wake of 2017’s Cyclone Debbie, Stormseal won a coveted federal government grant as part of a bid to make Australia more disaster-resilient – the funding helping Matt expand into the UK and US. “We do this around the globe and it happens in every storm. The first thing you go through is this shock, it’s like can you believe it 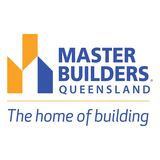