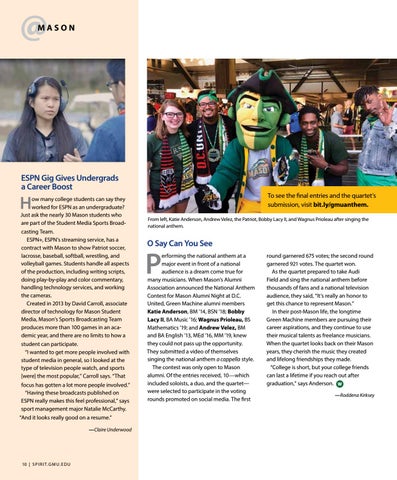 To see the final entries and the quartet’s submission, visit bit.ly/gmuanthem.

ow many college students can say they worked for ESPN as an undergraduate? Just ask the nearly 30 Mason students who are part of the Student Media Sports Broad­ casting Team. ESPN+, ESPN’s streaming service, has a contract with Mason to show Patriot soccer, lacrosse, baseball, softball, wrestling, and volleyball games. Students handle all aspects of the production, including writing scripts, doing play-by-play and color commentary, handling technology services, and working the cameras. Created in 2013 by David Carroll, associate director of technology for Mason Student Media, Mason’s Sports Broadcasting Team produces more than 100 games in an aca­ demic year, and there are no limits to how a student can participate. “I wanted to get more people involved with student media in general, so I looked at the type of television people watch, and sports [were] the most popular,” Carroll says. “That focus has gotten a lot more people involved.” “Having these broadcasts published on ESPN really makes this feel professional,” says sport management major Natalie McCarthy.

“And it looks really good on a resume.” —Claire Underwood

O Say Can You See

erforming the national anthem at a major event in front of a national audience is a dream come true for many musicians. When Mason’s Alumni Association announced the National Anthem Contest for Mason Alumni Night at D.C. United, Green Machine alumni members Katie Anderson, BM ’14, BSN ’18; Bobby Lacy II, BA Music ’16; Wagnus Prioleau, BS Math­ematics ’19; and Andrew Velez, BM and BA English ’13, MEd ’16, MM ’19, knew they could not pass up the opportunity. They submitted a video of themselves singing the national anthem a cappella style. The contest was only open to Mason alumni. Of the entries received, 10—which included soloists, a duo, and the quartet— were selected to participate in the voting rounds promoted on social media. The first

round garnered 675 votes; the second round garnered 921 votes. The quartet won. As the quartet prepared to take Audi Field and sing the national anthem before thousands of fans and a national television audience, they said, “It’s really an honor to get this chance to represent Mason.” In their post-Mason life, the longtime Green Machine members are pursuing their career aspirations, and they continue to use their musical talents as freelance musicians. When the quartet looks back on their Mason years, they cherish the music they created and lifelong friendships they made. “College is short, but your college friends can last a lifetime if you reach out after graduation,” says Anderson. —Roddena Kirksey

A magazine for the George Mason University community 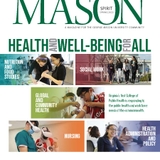