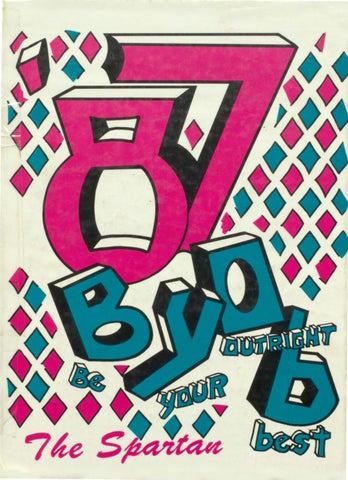 The Mock wedding, sponsored by the Home Ec Dept., is staged co teach students the planning of a wedding. Rev. McCloud officiated.

The 1986 football season started out great when the Spartans defeated Summ1t Country Day, m-o. A week later they went to Little M1am1. hoping co score big once again, but ended up losmg because of a bit of bad luck. Then they went on, beating Madison Plains, Clinton Massie (48-0), Greenview {Homecoming,, East ClintOn, Yellow Spnngs ( X)-6), and Southeastern Their chance to become KTC champs for the second year in a row then came, 1f they could just defeat Cedarville. Although they lost the game, we all know who the real champs are The1r over-all record was 7-3, and the1r KTC reocrd was 6-l. The season ended when they were defeated by Mason on Parents '1ght. During the season Tim Williams broke the record for longest field goal at Waynesville, ~1 yards. Although the year IS over, the memories will be remembered by the seniors of four great football years, and of bemg KTC champs their jun1or (198~) year.

Homecoming 1987 was September 26. The ceremonies were rained out and held at the dance the following night. It still turned out to be a memorable evenmg. Jennifer Vegso was crowned Queen and Andy Morgan was crowned Kmg. Pictured left to nght are the Semor Queen Candtdates: Alana Jenkins, Jennifer Vegso, Melea Shtvely, Knsun Raasch and Tawn Willtams. Senior Kmg candtdates ptctured clockwtse areÂˇ Gary Gnsmer Scot tiles, Ketth Shaffer, Darren Amburgy and Andy Morgan. To top off the Homecommg the Spartans defeated the Greenvtew Rams. Right, the 1986 Homecommg Kmg and Queen Andy Morgan and Jenntfer Vegso.

HEAVEN IN YOUR EYES

PICtured clockwtse are Junior attendants Bonnte Hoffer and Roben Manmng, Sophomore attendants, Angie Prewitt and Todd Cook, Freshman attendants Tammy Manntng and Rob Kallage. Knsttn and Roben racing out the door tO get to Taco Bell. The Queen and Kmg candidates ltned up for the last picture before the big night. The Queen candidates decide to kick back and relax. The kmg candidates grin tn front of their favorite statue. This year ptctures were taken at the Dayton An Institute

.. weÂˇve come a long way.. might be the phrase to best describe the 1986-87 edition of the WHS Spartan Band. Begmnmg with Band Camp in August at Rio Grande College, continuing through a .. rainy .. marching season, and into concert band, the group steadily improved wah each performance and realized a very successful year overall. The band received several honors during the year, including an overall excellent ratmg at the D1strict Band Festival with a superior rating in the Sight Reading Caption. Twenty-seven band members received superior or excellent ratings at the Solo and Ensemble Festivals in February and March. Amy Prewitt was selected to the first O.M.E.A D1stnct XIII Honor Band, and five band members were selected to participate in the A.AYH.M. tour co London, England m June. The b1ggest highlight of the year was a very successful weekend trip to Gatlinburg, T and the Great Smoky Mountains in April.

KTC Champs-'86 Volleyball By defeating ouchÂˇ Eastern, the partan Volleyball team was named KTC Champ for the second year in a row. Their overall record was 12Âˇ9, and their conference record was 9 wins and only 2 losses Honors were given co Kathy Van 'uys First team all KTC and the Spartan Award; Tawn Williams: KTC Honorable Mention and the team's Best Server award.; Michele Ames: First team all KTC, KTC Player of the year and the Team's most valuable player award; Sherri Rockhold: First team all KTC; and Shawna Meador KTC Honorable Mentaon. These players made the team successful and they will nor be forgotten .

L~ft. Kn tin Raasch upset w1th Joe Carter and his dependenC) hananne M1ller does her thmg . Below left: Deloris Hafner and Mike Allen can"t depart from each other. Bottom right Enn fle1den and Mike Allen dealing with th~ir first born. Ryan Ray scoping the scene and the rest of the cast m~mber

Farewell Mrs. Finch! Hello Newlyweds!!! Two maJOr happenangs touched the faculty and Waynesville family this year. One brought us sadness, the other surprise and delaght. Mrs. Finch, a highly qualified and excellent teacher, decided to reme. She was replaced by Ms. Paul at the end of the first Semester. Mrs . Finch as a giving, patient and thorough teacher. She as well-liked by both students and staff. We miss her a lot .. . but wish her all the best in her retirement. The second event was quite a surpnse to many of us. It was the marnage of Ms. Malcolm and Mr. Gabbard. Most surpnsed was the football team, wath whom the Gabbards are so closely associated. We also wish them all the best in their marned life' Pictured left, Mrs. MaraJean Finch. Pictured above, Tim and Cindy Gabbard .

from Upper 1.. Jamie & Darren share a snowflake dance. Rick dances with Diana & Kelly, Amy & Dawna boogte to the beat of the snowflakes' Everyone at WHS shows their beat. Jennifer, Kristin & Michelle show off the SENIOR BEAT. The beat goes on & on. Last, but not least, Craig dtsplays hts danctng style.

The sk t was the

BRING YOUR OWN STOCKING TO THE CHRISTMAS CONCERT!!!

These sophomores show the sptrit of the Class of

Kersun Bremser was our foreign exchange student rh1s year he came co us from Lahnsrem, West Germany, sponsored by the Rorary Club She lived with the Morgans, the Spargurs & the Dunkins. Kersrin had a full year at WHS, partiCipating in many awvmes: band, the Kmg and I, Volleyball & 'at"! Honor Society (into which she was inducted). Kerstm was an independent thinker and expressed her feelings freely Kerstin enJoyed band, chili and the people in the USA (bur nor necessarily in char order). " I really had a lor of fun . I felt it was a successful year. It"s the right thing co be an exchange student Kermn v.-as able co see a lor of the country before returning home. Aufwiedersehen K ersrm. We're glad you came!

ew brains jom the old ones.

auonal Honor Society members crazy from too much studying.

Yearbook Thank yous go out to: John Swartzel hriley Ames, Barb Allen & Bntt Sigmun (for picsr, Ktpp Stewart of Herff-Jones (for hts help & sense of humor); Michelle Lucas (for attending meetings); Mr. Harnng, Mrs. Wilson & Mrs Clark (fo their support). Those who chose not to complete their responstbility towards the book know exactly who they are.

A look of stupefaction comes upon Mr. Dtllon's face as a yearbook staff member comes to a summer meeting. She left 12 minutes later.

MIChelle Lucas served as Editor-in-Chtef of the 1987 Spartan

pnng is a very aCtive season at WHS. pnng sports, the prom, graduauon and the rush to get readr for it, college visits, grad parttes, finals, and the dreaded E ' IORITIS all combine tO make for a busr. happy time'

Ryan Ray Frosh of Year at Awards Program Ryan Ray was chosen oucscandmg Freshman of the Year at the annual AcademiC Awards held May 19th. This award is based on leadership, grades, accivicies, character Ryan's name will be entered on a plaque with the names of ocher outstanding Freshmen over the years Pictured left is Ryan receiving the Outstanding Freshman award from Mr. Williams. Clockwise chis page from below are ocher p1ccures from the Academic Awards Program: Ryan and his proud parents know something's afoot as Mr. Williams reads che description of the Freshman of the year. Tawn Williams rece1ves the Academic Booster's Scholarship from Mrs. Kleski. Several of the lsc places m the Amencan Leg1on Americanism Test were won by Knsu Brunton (soph.), Tracey Sch1eman (Senior), Ena Anderson &Ryan Ray (Fresh.). Mr. Harnng describmg another award Bonme Hoffer received lst Place in the Ohio Mach Educators' Test. Opum1st Club Scholarsh1ps were awarded co Tracey Schieman and K1m ichols by Mr. Jameyson. Mrs. Clark & the National Honor Society are co be complimented for che good work they do m organizing che Awards Program Since all piccures were taken at the Awards Program, only chose present are p1ccured.

Tawn Williams and Andy Morgan {left and below) were crowned Queen and King of the 1987 JunJOrÂˇSemor Prom. Mrs. Ph11l1ps, Berry Ratliff Or Pres.) & other class officers chose to have the prom on a river/party boat. It was a fun cho1ce ... but the prom seemed shorter this year. There were ~everal parties held after the prom in lieu of an Âˇ After-Prom". The day had been clear, It was pleasantly warm and the Cmcinnau skylme sparkled on the water as the Jubilee Queen sailed by Many stayed on the top deck holdmg hands and watchmg the shore and other boats. There was a breeze and romance was 10 the air. Many of the dresses seemed to have yards and yards of satin and lace. This, in the R1verboat setting, made the prom eem as if from some earl1er time. The Prom theme, "The Best of Both Worlds", was appropriate as reality and fantasy combined on a beaunful Sprmg night

On June 7, 1987, 73 anxious students waited to receive the1r diplomas from Waynesville High chool. After Reverend Hugh Hurley gave the invocation, Michelle Lucas said the Welcome and the commencement started off well, an 80 degree weather With approximately 1,000 fans an the audience. Speeches were g1ven by the Valedictorian and the Salutatonan, followed by the presentation of awards and diplomas endang an 90 degree weather Right Tawn Wil11ams, Valed1ctonan, receiving honors lst Honors an Social Stud1es, State Department of Education Award, Oh1o Board of Regents, Certificate of Ach1evement, and one of the Presidential AcademiC Fitness Awards. Tawn rece1ved the following scholarships: one $500.00 Rotary Scholarship and $1,000 Academic Boosters Scholarship. Top left of next page Michelle Lucas, SalutatOrian, receiving honors . lst Honors m Math and one of the Presidential Academic Fitness Awards. M1chelle rece1ved the followmg scholarships; one $500.00 Rotary Scholarship and the $4,000.00 Oh10 AcademiC Scholarsh1p. Everyone Left the gym, to the Coronation March from Star Wars ', after 12 years of hard work.

A Time of Sadness

Comfortable Living in an Atmosphere of Love and Concern

We Do Our Own Engravmg