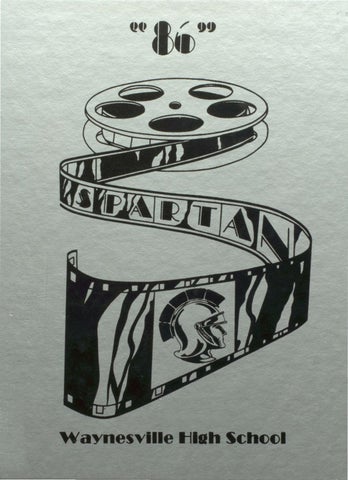 Spirit Week Spant Week is held each year during the week preceeding Homecoming. It raises spirit in the school and allows students to participate an a week-long exercase of fraendly compemaveness. Students compete in such contests as the Tug-of-War, Greased Pig Contest, Hall-Decorating Contest, etc. Hat Day, Button Day and the Powder Puff Football game led up co the Homecoming Game, crowning of the Homecoming Court and the successful Homecoming Dance. The Senaor/Freshman Team won the Powder Puff game. The Junaors won the Over-all Spine Week Compemaon.

The Spartans came into the 198~ season w1th Western star wmeups of dominating the league (wh1ch they proved by losing only to co-champ Southeastern). In the1r 7-3 season, the other rwo non-league losses were to Summ1t and Mason. 11 In the home opener, Waynesville hosted the Bulldogs of Summit Country Day. The offense could not get anything going the whole game. The Orange Crush Defense held them to JUSt 10 pts. and the team lost 1o-o. #2 The Little Miami Panthers came mto our town thmking they could beat the partans, but Waynesville had other plans. The game was fought hard and in the end, the Spartans won 14-10. Waynesville had just handed L.M. their only loss of the year. The defense executed perfeetly again, and Chris Cole lead the rushing attack with ~4 yds. and a touchdown. #3 Waynesville went to Madison Plains to play former coach Ke1th Mescher"s team in the cold. The Spartans came out fired up and beat them 3Q-O. Steve Taulbee was really psyched for the game, bur luckily for M.P., h1s helmet was still m Waynesville. The defense (cont. on next page)

turned m another excellent game whtle the offense executed perfectly. Bryan Agee and Gary Gnsmer had fumble recoveries while Mark Wolfe and Eric Coffman had mtercepc:ions. Chns Cole led all rushers wtih 151 yds. while Andy Morgan added 48 yds. rushmg. 14 In the Homecoming game agamst Clinton Massie, the Spartans came out ftred up and easily overpowered the Falcons, cruising to a 42-6 win. Chris Cole set a new smgle game rushing record with 327 yds. in 3 quarters Thts helped to cap off his evening after being named '"Homecoming King . The reserves got a lot of playing time and Mark (The Shark) Smtth recorded his first QB sack.

5 The partans then traveled to Greenview for the 5th arne of the ea on. Green\1ew had sent po ters and igns to chool g1ving the team the impression that Greenview thought they were going to win. Waynesville had knocked the Rams out of a chance for the tate pla}·offs the previous year and Greenview was hungry for revenge. However, the panans prevailed again, winning 24· 16. It was a very tough game and the whole team was nervou about Chn Cole bemg out. Roben Manning filled in well fini hing the game with 113 yds ru hing. 'ext the partans went to play the Ea t Clinton A tros on a cold, wet and rainy night. It was Ea t Clinton's Homecoming and they were really fired up. However, they didn't have anything co celebrate after the Spanans left cown. The team beat them lo-6 and the game was capped off by a crucial QB ack late m the game by Roben Mann mg. #7 In the next contest against Yellow Springs, the panans cruised tO a 42-Q halftime lead, and the re erves got to play the econd half. There were 8 QB acks by the Orange Cru h Defense as they defended a 42-6 wm. The next game against Southeastern was the most 1mponant game of the year. A wm would put the Spanans in the tate Playoffs. It was a very hard fought I t half and ended up in a 6-6 ue. The injury of teve Taylor early in the game and lots of penalties hun the team m the 2nd half and the final score was 2o-6 in the favor of outheastern. 19 The Spanans then traveled to Cedarv1lle where the} won 3-Q. Tim Williams kicked the eventual winning field goal in the 1st quaner. Cedarvdle was fired up and held the panans scoreless the rest of the game, but The Orange Crush Defense played great-led by Andy Morgan· and hutout the Indians to ecure the win. 10 The ~a on finale was agam t Ma on and was the last chance for the Spanans tO qualify for the State Playoffs It had been rammg all day and the field was a mess. Way~esville couldn't move the ball at all while Mason ran With east. Ma on won 12-Q and Waynesville's chances to make the Playoffs were rumed. COACHES: Head, Tim Gabbard, Am~tants : B1ll Woosly )1m Philpot, and teve Woods. Trainer: Cindy Malcolm and wonderful field director, Anthony Lamb. Thanks tO Mr. Woods of Franklin for a number of pies used in this lay-out!!

Brent Wentzel 4 yr letterman; He played off guard & def. tackle, he had 51 tackles · led the team (ue) in QB acks, KTC All-league all· Area, top off. I eman

Tom 0 borne lettered his Senior year, was a def. end.

B & B FARM MARKET

WHO SUPPORT OUR YEARBOOK

Society Bank Friendly up-to-data bankin& services for over I 00 yean.

Thanks, Merchants, For Your Support

DEALERS IN GRAIN & FARM PRODUCTS Hau'~d From Your Bin

Best Wishes, Class of '86 from

Christmas Assembly The Chnstmas Assembly was alive and electric this year! Mr Tharr and a group of students were in charge this year and did a good job! The gym was decorated with crepe paper streamers, trees hung w1th little lights, poinsettias, and tinsel. Pop and popcorn were enjoyed by the audience and the air was filled With excitement kits, singing, piano-playing. the Bag Brothers, Santa With elves and vanous other acts were well-received by all. Santa tossing candy drove some to wildness! There was a good feeling; everyone was " up." Christmas vacation had begun electrically!

Mark Ander on Mel! a Bailey am Bailey

CULTORE'S IN! THE MUSE MACHINE Th~

The Dayton Contemporary Dance Group, O~ra 'The Telephone"), The Dayton Philharmonic Brass &ction, and a scene from "Animal Farm".

The reserve basketball team had a fairly successful season, finishing the year with a record of 11Âˇ9. They had a very strong start, posting a 7Âˇ1 league record at one point but declmed m the second half of the season and fin1shed second behind Yellow Springs, Pictured l. to r. above: Coach Byrd, J. Brown, R Brickley, M. Anderson, M Tidwell,). tapleton, M. Zimmer, and R. Manning.

Varsity Basketball The Boy's Varsity Basketball team under first year coaches, Greg Cecere and Mike Byrd posted a somewhat deceiving 9Âˇ11 record. Deceiving due to the fact that the Spartan cagers lost a couple of games by less than four points. The Spartans, led by seniors Chris Cole and Tim Livingston battled through many close games. The season was highlighted by two overtime

games. The first was a dramatic four overtime loss to East Clinton, and a single overtime victory against Clinton-Massie, on the Falcons home court. Coach Cecere, though losing key seniors, looks forward to next year as both his scoring, and free throw leaders Steve Rice and Darren Amburgy return.

Chns Cole drives for a layup.

Tim Ltvingsron powers up a shor.

Members of the Art Dept and Muse Machine, under the direction of Ms. Tackett (see pic. bottom left) created a "Musical Sculpture" for a contest of all Muse Machine Schools (It was held at Carillon Park m Dayton). The creation, a dinosaur, won First Place in competition w1th schools from throughout the Miami Valley. This is but one of the successes of the Art Dept. this year. The annual art show 'pies this page d1splayed projeCts which took Gold Key Awards (M1ke Z1mmer, Mary Trimble, Jonathan Sloan-HM). Art College Scholarsh1ps were won by Mary & Paul Smith.

Right, left to nght are the 1986 Boy's & Girl s tate Representatives from WH . Andy Morgan, Alana Jenkms, Jill Cessna, Darren Amburgy. The Pancake Breakfast (piCS th1s page) is prepared by the H.S. faculty & admini tration as a reward for students whose homerooms have maintained the highest tandards of attendance & scholarship. The Mock Trial (p. 109) was organ1zed by Mr. Barton & Mr. Webb to g1ve Social tudies students practical expenence wnh the workings of our courts. Th1s year, local lawyers & a tudent jucy made the trial (a gut wanting to JOin a soccer team) realistic.

Argyle socks and plaids were quite the fashion during the 8th, 9th, & lOth of May and for some time leading up to these days. Brigadoon was a well-played and hard-worked-on musical and a great credit to the Drama Department, Mr. Leist, Mr. B1lbrey, the student actors, dancers & musicians. The leads this year went to Julie Dunham, Glen Kuras, Jamie Brower, Chris Engel ... with excellent supporting roles performed by Jennifer Vegso, Joe Carter, Amy Prewitt, Ryan Ray, Becky Forsythe, Jeff Schieman, Berry Ratliff, Mike Allen, Missy Gradel and Amy apier. The remaining cast as well as Eva Kay Sheets, Dean Sellers, Patrick Cassidy, Paul Bernard, Lois Gradel and the technical crew made this year's Musical BRIGADOO an enjoyable and professional production.

'86 Prom Wins an ((Oscar" The 1986 Prom was an "Oscar-Winnmg" evemng held May 3, at the College Football Hall of Fame at Kmg's Island. The kids ''cleaned-up'' well and looked simply ··maahrvelous" The food was great th1s year and the musiC, prov1ded by Chns Ge1son of 96 Rock was ternfic. Tammy Chnsty and Chns Brower were crowned Queen & Kmg. Popular songs included the " B1rd'' by Morris Day & the Time, ''Shout", 'Tender Love" by AtlantiC tar. The After-Prom didn't pan out so there were a lot of mdividual parties afterwards. "The memories will last for ever", sa1d several Juniors & Semors.

The making of the 1986 Spartan has been a lot of work for the few people who took us completion as an important responsibility. As photographer for the yearbook, I would lake to thank those people who were kmd enough to comnbute photos (especially of events I m1ssed while hospitalized): Mrs. Allen, Mr. Woods of Franklin, M1ssy Davidson, Tina Bailey, Delmar tudios & everal others. The burmng of Osborne tudios added very much to our d1fficulnes this year. Mistakes have been made as have om1ssions. I feel that in spite of what went wrong (especially finances!), we have created a book wh1ch has done its JOb~ to depict our school and its happenings in 198~-6 With fla1r and professionalism. I would like to thank Paul Sm1th for the cover design & art work, Mrs. Clark for her positive comments, Michelle Lucas for accepting the job of EditOr for the 1987 Spartan, K1pp Stewart of Herff-Jones for h1s help & Mr. Harring & Mrs. Wilson for their support. And a pox on Mr. Brower for dumpmg this job on me 11 yr. ago! (joke!) Mr. Dillon