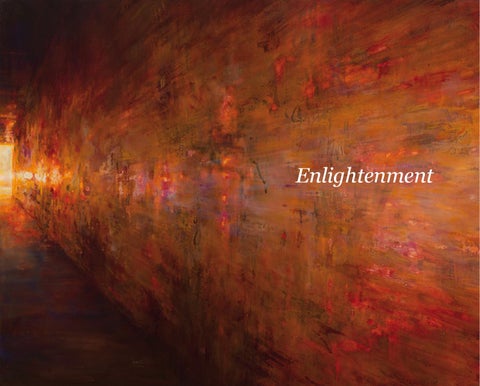 Blakean outpourings of dazzling light rendered in colour that is subtle but also explosive, with a burnished patina of marks and sheens, characterize Nina Murdoch’s latest paintings. Sometimes, the paint seems to float, tied neither to the picture surface nor to any recognized distance within the image. She depicts what could be a flare path to an underground car park or bunker, the undramatic subject of corridor and underpass lit to an unearthly pitch. This might be underworld light yet it is celebratory, beneficent, not hellish and destructive. She returns again and again to the same places for inspiration: to the streets and buildings of south London, to a bunker in Devon, a car park in France. A painting may be sparked off by something as apparently simple as reflections on wet tarmac, but in other respects Murdoch’s gritty urban subjects are also an excuse to paint an ‘incredible ultramarine blue’ she has seen and marvelled at. What is her intention? If it is to match or in some way mirror the ever-changing face of nature, then the image must be mutable and remain in flux. But the painted statement, however full of suggested movement, is usually a fixed point or arrested action. Murdoch’s achievement is to endow the painted stasis with a broader potential: in other words, she invests the image with other suggestions. For example, the car park takes on the dying prairie gold of a sunset or the oceanic swell of deep water. Yet she is fundamentally true to the constancy of the material world and pictorial unity remains intact. She paints exceptional moments of light, but also moments of vision, when appearances are transfigured by the play of light into something beyond the ordinary. Is this a revelation of divinity or some sort of hidden spiritual nature not normally apparent in everyday life? Perhaps. Contemplating Murdoch’s work, even the most percipient viewer would be unlikely to make a connection with the radical realist

painter Euan Uglow (1932-2000), yet such a link does indeed exist. Murdoch was taught by Uglow at the Slade and to him can be attributed much of the rigour of her approach, the intensity of her examination of the world. (‘He taught me to look’, she says.) Her images, however abstract they may seem, are still very much to do with specific places, though these are probably only recognizable to the artist herself. ‘They are places I have been when something has happened – when the serendipity of finding them and being there at the right moment somehow come together. The place has to mean something to me.’ The event is a visual one: such as seeing a pool of leaked engine oil on a slab of concrete suddenly flushed with rainbow light: mundanity translated into breathtaking grandeur and beauty. Murdoch might make a simple diagram in a sketchbook of what she’s seen, with colour notes, but the principal burden of the scene is left to her memory. I visited Murdoch’s studio when some paintings had been finished, others were still in process, but none had been titled. (Titles come afterwards and derive mostly from old maps and deeds of the places painted.) Her large gessoed panels pack an immediate punch of dynamic potent colour, the subtleties of the tempera held in place and reinforced by glazing medium. One painting was a wall of pullulating sun-throb apricot and pink and lilac and gold and mauve, with darks working horizontally and vertically through it. (Murdoch often uses the suggestion of two axes meeting at right angles to structure her compositions, though arrived at by eye and not by strict measurement.) It was a wall of extreme and wildly modulated colour, but under control nonetheless, brought into harmony by the artist’s pictorial intelligence. This is primarily intuitive rather than rational, deployed through subconscious procedures as much as moving paint around. ‘I do everything by how it feels, not how it should be’, Murdoch admits. ‘I dream my pictures’. This particular painting took over a year to reach resolution, and she has been working on a group of ten panels concurrently, moving from one to another as she followed her inspiration. She carries the paintings in her head, and before entering the studio she knows

precisely on which picture she will resume working. ‘I’ve learnt how to get into character for each painting’, she says. She works almost entirely from memory and can visualize her compositions with considerable accuracy. Nevertheless the actual process of painting remains one of discovery, of gradual change (with implicit continuity), as she works across the panels – every area of paint demanding corresponding work on the rest of the picture. That dialogue within the painting is what keeps it alive and fresh during its extended gestation. These pictures are very specifically about tempera and the freedom she finds in the medium – the ability constantly to change – that simply would not be available to her in oils. Murdoch works by applying many fine layers of paint, and then working back through them. Her seemingly rather random markmaking is drawn together at the last moment, as all is gathered in and every point or passage of colour made not only to fit the puzzle but also to enhance it. Trying to paint light yet also convey the reality of a concrete road; to have light streaming through such solidity, irradiating it, is both technically and logically difficult. But the painting has to work on all levels: as paint as well as depiction, as space as well as surface. The characteristic vertical division which appears in these new paintings is also a barrier which separates warm colours from cool, light from dark and distance from close-to. These polar opposites are often at odds during the process of painting, but eventually everything must balance, and find its place and purpose. She generally works flat upon a table (not relishing the dripping or running of paint – though in one case recently it did solve a problem for her), applying or removing paint, sanding back gently through the accumulated layers of pigment to reveal an earlier colour presence. This archaeological delving is very much part of the painting process. Sometimes the newly-exposed colour is unexpected, sometimes (planning backwards) it is deliberately sought. Murdoch describes the process as ‘like unlocking a code. It’s a question of getting bits to work at different stages, and one bit will release another. It’s just an enormous puzzle, which remains very fluid right to the last minute.’ Accident may be encouraged and incorporated – it may also be simply

washed off. This is the advantage of using tempera, the trial and error allowed by the medium. Experience lies in knowing what to keep. There are contradictions built in, as in so much good art. Murdoch’s is an essentially urban vision, yet the bunker she paints is in rural Devon. The light has the richly changing quality of natural sources, but it also partakes of the studiedly artificial. The imagery remains resolutely metropolitan, if no longer the urban romanticism of the Nineties and Noughties praised by Tony Parsons. Now it has developed into a kind of urban baroque: opulent, fizzing with contained movement, extra-ordinary. In her luscious surfaces the colour is foaming, falling, fulminating, trapping the numinous. In these new paintings there is the richness of visual invention, the sumptuousness of colour, to be found in Monet’s or Rembrandt’s late paintings. I’m thinking of the Nymphéas (Monet’s majestic paintings of water lilies) or imagining an undiscovered late Rembrandt of Danae and the Shower of Gold. There’s also something of the feeling of Whistler’s great Peacock Room here, in the dancing patterns and colours. Murdoch’s paintings present a focus of light in an all-encompassing dark: images of radiance and great hope, of the power of nature to combat and counterpoint the man-made environment. In her work beauty erupts in unpredictable places, in unprecedented forms. In Conversations with Cézanne, Joachim Gasquet records the artist as saying: ‘All that we see dissipates, moves on. Nature is always the same, but nothing of her remains, nothing of what appears before us. Our art must provide some fleeting sense of her permanence, with the essence, the appearance of her tangibility.’ That is what Nina Murdoch does with her luminescent paintings, her visions of the urban quotidian. Without revelatory shafts of light, her world (as ours) would be hutched in gloom. But if we tried to trace this light source, perhaps with line of sight back towards some heavenly body, would we be any the wiser? Probably not. Some mysteries are intended not to be explained. 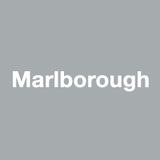