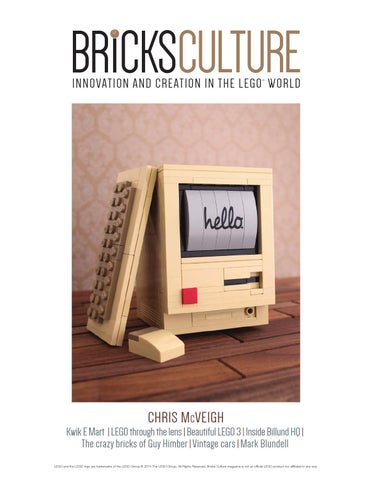 INNOVATION AND CREATION IN THE LEGO WORLD ®

CHRIS McVEIGH Kwik E Mart | LEGO through the lens | Beautiful LEGO 3 | Inside Billund HQ | The crazy bricks of Guy Himber | Vintage cars | Mark Blundell LEGO and the LEGO logo are trademarks of the LEGO Group © 2015 The LEGO Group. All Rights Reserved. Bricks Culture magazine is not an official LEGO product nor affiliated in any way

Inside the mind of a genuine LEGO genius

An entirely fresh perspective on the new Simpsons set

What happens when we give LEGO to an artist who hasn’t touched it since childhood?

74 MIKE DOYLE Unconventional builds including some from his upcoming book Beautiful LEGO 3: Wild!

Steampunk and beyond through the eyes of a unique talent

HMS Moondreams’s Voyage to the Moon Reproduced from Steampunk LEGO with the permission of No Starch Press. © 2015 by Guy Himber.

Originator, visionary, genius: Chris McVeigh is a true icon of what can be achieved with LEGO. He tells Bricks Culture about scale, stress... and his complex relationship with visible studs

surprising photographs of Hasbro Star Wars action figures encountering real live chipmunks got showcased on your favourite blog. It might have been his Macworld article that taught you how to use Photoshop to remove dust from images. Perhaps your friend was wearing one of his pop culture T-shirt designs. His exquisite LEGO scale models of items like retro technology are likely to have made it into your social media feeds at some point, or perhaps you saw his LEGO contributions to Gizmodo.com as guest artist. Based in Halifax, Canada, this one-time freelance illustrator and author began experimenting with photographing toys in 2007 and rapidly found an appreciative online audience that shared his lifelong love of Star Wars and LEGO – the latter becoming his main focus since 2011. Chris began selling his models as custom kits and the exquisite photographs he takes of them can be purchased as prints, or on products like phone cases. As if there weren’t enough strings to his bow, those same photographs regularly go viral thanks to the savvy and vast social media presence Chris has established – currently over 32,000 likes on Facebook alone. And there are more ways to enjoy his work for free: anyone can download instructions from chrismcveigh.com, such as his annual series of Christmas ornaments. Bricks Culture caught up with the man himself for an in-depth LEGO discussion.

THE BIRDMAN A gardener by trade, Tom Poulsom is one of the few fans to have had their designs turned into an official set via the LEGO Ideas site. He and his brood took Bricks Culture for a nature walk in his home town of Bristol in England Words: Mark Guest Photography: Andrew Tipping

om Poulsom was probably better known for his custom

LEGO car creations, but little did he know that his decision to quit his office job for landscaping would change that. The shift outdoors would not only prove to be the catalyst for a happier Tom, but would also change the way he looked at LEGO and shoot him to stardom within the community. It was an ordinary day as Tom was forking the soil when he took a well-earned break and stood back to admire his handiwork. At this point a robin cheekily landed on the fork handle and inspired Tom to replicate this beautiful piece of nature in LEGO form. It was the start of an obsession that led to his designs becoming an actual set. We caught up with Tom as he unveiled his new LEGO Ideas submission, Birds 2, to find out the full story. How do you decide what to build and where do you start? When I see something I like, I’ll picture in my head whether I am going to be able to work out a way to be able to build it from LEGO bricks. Unfortunately I do not have a photographic memory, so usually I get photos from every angle – sometimes my own but mainly using Google – and print them off, lay them in front of me and build from those. With birds I normally start with the head because the most prominent features are the eyes and beak. That enables me to get the scale as close as possible and work my way down to the body from there.

IN LEGO, WE CONNECT This is an art exhibition featuring three incredible photographers separated by more than half the Earth’s diameter, but united by a shared passion for macro photography… and LEGO Words: Are J. Heiseldal Photography: Jim Bennett

acro photography is a fascinating thing. When done

right, experimenting with depth of field, lighting and different backgrounds yields results that play with your mind, tricking you into thinking that the objects in the picture are bigger than they really are. Unsurprisingly, this works very well with LEGO parts – especially the now iconic minifigures, first introduced in the late 1970s, which seem to pop up ever more frequently in photographs on social media and photo sharing websites. In March, three masters of LEGO macro photography found themselves in Seattle, Washington, setting up an art exhibit at the Bryan Ohno Gallery which specialises in works that ‘blur the line between art and science, challenge art traditions and embrace evolving cultural intersections.’ The works of Shelly Corbett, living in Seattle, Finnish resident Vesa Lehtimäki, and a Belgian living in Sweden, Boris Vanrillaer, made up the exhibition In LEGO, We Connect, on display between 5th March and 11th April. All three artists are professional photographers, more affectionately known by the aliases @xxSJC (Corbett), @Avanaut (Lehtimäki) and @_Me2_ (Vanrillaer) on social media. They share a common story: one of rediscovering the wonders of LEGO bricks through their own children. According to the

FOR THE CONNOISSEUR OF EVERYTHING BRICKS

Bricks Culture is a lavish new brand examining and celebrating the rich and complex ways that people now build LEGO into their art, their businesses and their lifestyles. Bricksculture invites you to reappraise LEGO from a new perspective

SUBSCRIPTIONS START FROM ONLY

Speed Champions cars go head-to-head | Exclusive: lost Jetbike instructions | Behind the scenes at Bricks in Motion | The influence of Friends | Avengers helicarrier | The creative genius of Carl Greatrix | Masterclass builds | The ten-minute LEGO egg LEGO and the LEGO logo are trademarks of the LEGO Group © 2015 The LEGO Group/ All Rights Reserved. Bricks magazine is not an official LEGO product or affiliated in any way

INSIDE THE LEGO GROUP

Every issue, Bricks Culture will be speaking to a luminary from the LEGO Group. Kicking things off, Kim Ellekjær Thomsen discusses the company’s relationship with its adult fans Words: Mark Guest

ALL THINGS BRIGHT AND

BEAUTIFUL MIKE DOYLE In my Beautiful LEGO series of books, I feature many interesting builds from around the world – often from the point of view of artistic expression. One of the fantastic aspects of LEGO is its potential to surprise and delight as a new medium of expression. We have all grown up with the familiar boxed sets and know what LEGO builds are ‘supposed’ to look like, but when designers venture out into new territory – either through subject matter, expression or advanced and unusual techniques – their creations break the conventional expectations of what this medium has to offer. In this way, LEGO builds can often be more impactful than traditional mediums simply because we are already used to the wide variety of ways in which one can paint a painting, for example. LEGO, on the other hand, is a fresh, new territory, where pioneering artists find plenty of room to explore. The skill and imagination that builders display grows each year as we share with each other. Each and every day I marvel at some new creation that I find, which serves to fire up my desire to create and enhance the creative process even more. On these pages, I’ve selected a few builds that showcase the surprise and delight I have for interesting expressions in LEGO form. Most of these works will be featured in my upcoming book about nature, called Beautiful LEGO 3: Wild!

In Moko’s piece titled Fenix (right), we see the beautifully flowing, manipulated LEGO elements glide and project in every direction. The use of only transparent elements adds to the illusion of flow as pieces seem to melt into each other. Presentation here is excellent, with the dramatic background shadows and the contrasting, brilliantly lit, sparkling elements.

Discover proposals for new LEGO® sets created by fans just like you! Upload your own idea, or support your favorites. Give feedback and share ideas with your friends so

they get noticed. The more active you are the more chance you have of seeing great ideas become awesome LEGO products.

We’re looking for the next bright LEGO® idea…

Bricks Culture is all about innovation and creation in the LEGO® world. It features LEGO® artists from around the world, exclusive interviews from inside and outside the LEGO group and much more. Want more than just this taster then order today from store.republic66media.com