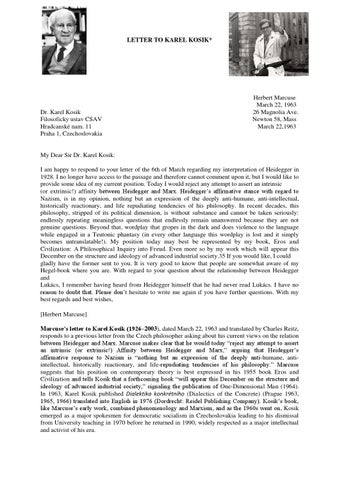 My Dear Sir Dr. Karel Kosik: I am happy to respond to your letter of the 6th of March regarding my interpretation of Heidegger in 1928. I no longer have access to the passage and therefore cannot comment upon it, but I would like to provide some idea of my current position. Today I would reject any attempt to assert an intrinsic (or extrinsic!) affinity between Heidegger and Marx. Heidegger’s affirmative stance with regard to Nazism, is in my opinion, nothing but an expression of the deeply anti-humane, anti-intellectual, historically reactionary, and life repudiating tendencies of his philosophy. In recent decades, this philosophy, stripped of its political dimension, is without substance and cannot be taken seriously: endlessly repeating meaningless questions that endlessly remain unanswered because they are not genuine questions. Beyond that, wordplay that gropes in the dark and does violence to the language while engaged in a Teutonic phantasy (in every other language this wordplay is lost and it simply becomes untranslatable!). My position today may best be represented by my book, Eros and Civilization: A Philosophical Inquiry into Freud. Even more so by my work which will appear this December on the structure and ideology of advanced industrial society.35 If you would like, I could gladly have the former sent to you. It is very good to know that people are somewhat aware of my Hegel-book where you are. With regard to your question about the relationship between Heidegger and Lukács, I remember having heard from Heidegger himself that he had never read Lukács. I have no reason to doubt that. Please don’t hesitate to write me again if you have further questions. With my best regards and best wishes, [Herbert Marcuse] Marcuse’s letter to Karel Kosik (1926–2003), dated March 22, 1963 and translated by Charles Reitz, responds to a previous letter from the Czech philosopher asking about his current views on the relation between Heidegger and Marx. Marcuse makes clear that he would today “reject any attempt to assert an intrinsic (or extrinsic!) Affinity between Heidegger and Marx,” arguing that Heidegger’s affirmative response to Nazism is “nothing but an expression of the deeply anti-humane, antiintellectual, historically reactionary, and life-repudiating tendencies of his philosophy.” Marcuse suggests that his position on contemporary theory is best expressed in his 1955 book Eros and Civilization and tells Kosik that a forthcoming book “will appear this December on the structure and ideology of advanced industrial society,” signaling the publication of One-Dimensional Man (1964). In 1963, Karel Kosik published Dialektika konkrétního (Dialectics of the Concrete) (Prague 1963, 1965, 1966) translated into English in 1976 (Dordrecht: Reidel Publishing Company). Kosik’s book, like Marcuse’s early work, combined phenomenology and Marxism, and as the 1960s went on, Kosik emerged as a major spokesmen for democratic socialism in Czechoslovakia leading to his dismissal from University teaching in 1970 before he returned in 1990, widely respected as a major intellectual and activist of his era.