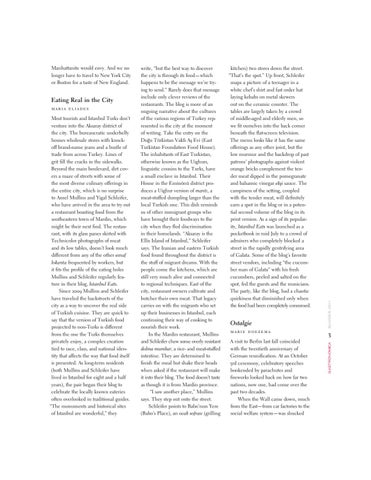 Most tourists and Istanbul Turks don’t venture into the Aksaray district of the city. The bureaucratic underbelly houses wholesale stores with knockoff brand-name jeans and a bustle of trade from across Turkey. Lines of grit fill the cracks in the sidewalks. Beyond the main boulevard, dirt covers a maze of streets with some of the most diverse culinary offerings in the entire city, which is no surprise to Ansel Mullins and Yigal Schleifer, who have arrived in the area to try out a restaurant boasting food from the southeastern town of Mardin, which might be their next find. The restaurant, with its glass panes skirted with Technicolor photographs of meat and its low tables, doesn’t look much different from any of the other esnaf lokanta frequented by workers, but it fits the profile of the eating holes Mullins and Schleifer regularly feature in their blog, Istanbul Eats. Since 2009 Mullins and Schleifer have traveled the backstreets of the city as a way to uncover the real side of Turkish cuisine. They are quick to say that the version of Turkish food projected to non-Turks is different from the one the Turks themselves privately enjoy, a complex creation tied to race, class, and national identity that affects the way that food itself is presented. As long-term residents (both Mullins and Schleifer have lived in Istanbul for eight and a half years), the pair began their blog to celebrate the locally known eateries often overlooked in traditional guides. “The monuments and historical sites of Istanbul are wonderful,” they

kitchen) two stores down the street. “That’s the spot.” Up front, Schleifer snaps a picture of a teenager in a white chef’s shirt and fast order hat laying kebabs on metal skewers out on the ceramic counter. The tables are largely taken by a crowd of middle-aged and elderly men, so we fit ourselves into the back corner beneath the flat-screen television. The menu looks like it has the same offerings as any other joint, but the low murmur and the backdrop of past patrons’ photographs against violent orange bricks complement the tender meat dipped in the pomegranate and balsamic vinegar eks¸i sauce. The campiness of the setting, coupled with the tender meat, will definitely earn a spot in the blog or in a potential second volume of the blog in its print version. As a sign of its popularity, Istanbul Eats was launched as a pocketbook in mid July to a crowd of admirers who completely blocked a street in the rapidly gentrifying area of Galata. Some of the blog’s favorite street vendors, including “the cucumber man of Galata” with his fresh cucumbers, peeled and salted on the spot, fed the guests and the musicians. The party, like the blog, had a chaotic quirkiness that diminished only when the food had been completely consumed.

A visit to Berlin last fall coincided with the twentieth anniversary of German reunification. At an October 3rd ceremony, celebratory speeches bookended by parachutes and fireworks looked back on how far two nations, now one, had come over the past two decades. When the Wall came down, much from the East—from car factories to the social welfare system—was shucked

Eating Real in the City

write, “but the best way to discover the city is through its food—which happens to be the message we’re trying to send.” Rarely does that message include only clever reviews of the restaurants. The blog is more of an ongoing narrative about the cultures of the various regions of Turkey represented in the city at the moment of writing. Take the entry on the Dog˘u Türkistan Vakfı As¸ Evi (East Turkistan Foundation Food House). The inhabitants of East Turkistan, otherwise known as the Uighurs, linguistic cousins to the Turks, have a small enclave in Istanbul. Their House in the Eminönü district produces a Uighur version of mantı, a meat-stuffed dumpling larger than the local Turkish one. This dish reminds us of other immigrant groups who have brought their foodways to the city when they fled discrimination in their homelands. “Aksaray is the Ellis Island of Istanbul,” Schleifer says. The Iranian and eastern Turkish food found throughout the district is the stuff of migrant dreams. With the people come the kitchens, which are still very much alive and connected to regional techniques. East of the city, restaurant owners cultivate and butcher their own meat. That legacy carries on with the migrants who set up their businesses in Istanbul, each continuing their way of cooking to nourish their work. In the Mardin restaurant, Mullins and Schleifer chew some overly resistant dolma mumbar, a rice- and meat-stuffed intestine. They are determined to finish the meal but shake their heads when asked if the restaurant will make it into their blog. The food doesn’t taste as though it is from Mardin province. “I saw another place,” Mullins says. They step out onto the street. Schleifer points to Babo’nun Yere (Babo’s Place), an ocak sofrası (grilling

Manhattanite would envy. And we no longer have to travel to New York City or Boston for a taste of New England.

Ansel Mullins and Yigal Schleifer uncover the real side of Turkish cuisine in the late 2000s with their cult blog, Istanbul Eats. 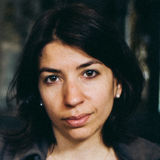