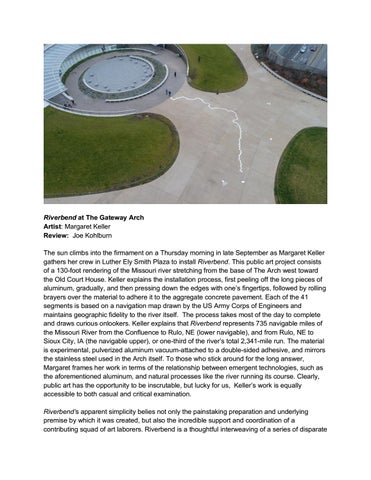 Riverbend at The Gateway Arch Artist: Margaret Keller Review: Joe Kohlburn The sun climbs into the firmament on a Thursday morning in late September as Margaret Keller gathers her crew in Luther Ely Smith Plaza to install Riverbend. This public art project consists of a 130-foot rendering of the Missouri river stretching from the base of The Arch west toward the Old Court House. Keller explains the installation process, first peeling off the long pieces of aluminum, gradually, and then pressing down the edges with one’s fingertips, followed by rolling brayers over the material to adhere it to the aggregate concrete pavement. Each of the 41 segments is based on a navigation map drawn by the US Army Corps of Engineers and maintains geographic fidelity to the river itself. The process takes most of the day to complete and draws curious onlookers. Keller explains that Riverbend represents 735 navigable miles of the Missouri River from the Confluence to Rulo, NE (lower navigable), and from Rulo, NE to Sioux City, IA (the navigable upper), or one-third of the river’s total 2,341-mile run. The material is experimental, pulverized aluminum vacuum-attached to a double-sided adhesive, and mirrors the stainless steel used in the Arch itself. To those who stick around for the long answer, Margaret frames her work in terms of the relationship between emergent technologies, such as the aforementioned aluminum, and natural processes like the river running its course. Clearly, public art has the opportunity to be inscrutable, but lucky for us, Keller’s work is equally accessible to both casual and critical examination. Riverbend’s apparent simplicity belies not only the painstaking preparation and underlying premise by which it was created, but also the incredible support and coordination of a contributing squad of art laborers. Riverbend is a thoughtful interweaving of a series of disparate

intellectual and aesthetic threads. The low-hanging fruit here is simply the realization that humans have for tens of thousands of years used art as a means to re-contextualize nature based on available technologies, whether that’s experimental adhesive or Paleolithic pigments depicting prehistoric horses and bulls on the cave walls in Lascaux. The apparent question is what purpose such activities serve, and what we gain from them. Is it that this visual mythopoeia allows us to refashion the baffling natural world on our own terms, and prefigures more malevolent efforts to bend the land to the will of prevailing political and plutocratic structures? Indeed, Keller’s work may be considered a return to a gentler relationship with rivers and the larger world into which they are woven. In the same way that The Arch is a synecdoche for our city, so too are rivers for our local and national history. The reflective material is a nod to modernist abstraction vis-a-vis Donald Judd, as well as the earlier paper cuts of Matisse. Contained within is also an invitation to reflect on the real impact of western expansion. In the process of colonizing the state of Missouri, the U.S. Government displaced the seven tribes that once occupied the territory (The Osage, Otoe, Ioway, Chickasaw, Illini, Quapaw, and Missouria).1 So thoroughly were these first peoples (to use a repugnant and bureaucratically vague term) “removed” from the land that the very same federal government presently recognizes no tribes within the state borders. How ironic that the Soiuan word from which Missouri’s name is derived refers to a place that presently contains no tribes at all. The Arch shares its modernist sheen with Keller’s Riverbend, but the underlying logic is ultimately antithetical. Keller’s work is collaborative, inclusive, and ultimately constructive. Conversely, declaring the riverfront real-estate sufficiently ‘blighted’ to begin construction of the Arch entailed abhorrent and familiar speculative real-estate ventures, ballot stuffing (the PostDispatch reported over 46,000 counterfeit votes in a 1934 ballot measure generated by city engineer W.C. Bernard), and dismantling 40 blocks and 290 businesses. Eventually, the effort stalled out, leaving the grounds empty. After a design competition in 1947, and new relevance owing to Eisenhower’s interstate program, the project reinitialized, and was eventually completed in 1965 under LBJ. The Gateway Arch would visually compliment a series of highways that cut off the city’s predominantly African-American neighborhoods from downtown development, just as construction unions barred black folks from working on the monument itself.2 This ties critically into the broader conversation about the nature of monuments, and the frequent need to reexamine ahistorical presuppositions about the quality of America, and the means by which occasional and segmented prosperity is achieved. Dovetailing into these concerns are environmental questions. The Missouri river is the longest in North America, it is the means by which Lewis and Clark traversed the continent and moved into the west, but it is also a vital natural resource. As Keller herself notes , “[The Missouri’s] watershed encompasses one-sixth of all the land in America with one-fourth of all agricultural products grown in the US

originating in its catchment. Countless species of birds, fish, animals, and plants are native to its waters, its riverbanks, and floodplains. Conservation efforts are ongoing to preserve many of these threatened organisms native to our area and important to our ecology.â&amp;#x20AC;? On opening morning, Keller and her volunteers work with visitors to fold origami boats to set adrift on the aluminum Missouri River. Each boat contains a message of hope, a wish for the future. Just as the Playable City Movement to which Keller links her piece encourages us to engage with public artwork, so too does Riverbend point to the importance of public art as an opportunity to build momentum in a city that lacks critical arts infrastructure. Perhaps, these emergent futures born by paper boats on an imaginary river will help us bend modernist paradigms to our contemporary and diverse mores, and reimagine our communities and relationships, if not our history. Through December, 2018

Margaret Keller's Riverbend, installed at The Gateway Arch National Park in 2018, is a 130-foot-long artwork of aluminum nano-particles, representing the navigable Missouri River as the primary means of Westward Expansion and Gateway to the West. Made of reflective, mirror-like material, Riverbend orients to the course of the Missouri, starting at its confluence with the Mississippi. Public interaction and access is from any point, to walk, bike, run, play or just sit. A river of brilliant, changing light, Riverbend activates the space. By including and reflecting everyone on its silver surface, along with their movement, Riverbend especially recognizes the indigenous Native Americans displaced during Westward expansion, along with Black communities destroyed during Arch construction. Named after the poetic river bends along the Missouri, Riverbend makes comprehensible the river's importance as the longest river in North America. Stretching out, glittering, before the public, it invites exploration 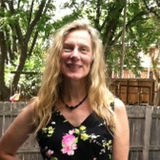