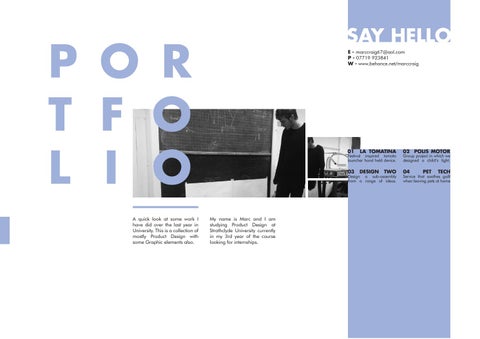 P O R T F O L I O A quick look at some work I have did over the last year in University. This is a collection of mostly Product Design with some Graphic elements also.

Design a sub-assembly from a range of ideas.

My name is Marc and I am studying Product Design at Strathclyde University currently in my 3rd year of the course looking for internships.

Service that soothes guilt when leaving pets at home

For my Design Interaction class, the brief stated that I had To design an interaction that re-imagines how objects, movement, and gestures are used in the context of eating and drinking in everyday life. This design is a hypothetical project which means feasibility doesnâ&#x20AC;&#x2122;t matter too much. I decided to create a product that celebrated Spanish culture and is inspired by the La Tomatina festival which is held in the town of Bunol, Valencia annually. We donâ&#x20AC;&#x2122;t get projects like this often at Strathclyde University so it was a nice change of thought.

Using post-it notes, I thought out every situation involving food to try and come up with a unique take on the project. I went down the path of which my gut told me.

Of the situations on the wall I liked the scenario of a food fight and how itâ&#x20AC;&#x2122;s engraved in culture which led me to research the annual La Tomatina, in Spain.

On the right, thematic sketches were produced also. The sketches shown were whipped up whilst being relaxed, without thinking about a PDS or anything. The ones I seen potential in I highlighted using the red circles to link it to flying tomatoes.

A tomato launcher fit for a party. The hand held device that will throw tomatoes once a year on the day of La Tomatina festival and will only work in the location

BuĂąol, Valencia. The handle is made from the wood of the famous Valencian Orange Trees to pay homage to the townâ&#x20AC;&#x2122;s culture and traditions of the past.

Integrated Studies is a class which puts all what they teach you at the University and apply it into the one project. The project was to create a light product that runs on renewable energy. A model and a folio was to be graded for the class. This was a group assignment which gave opportunity to experience having to work in a team and develop the skills needed. Using the design process we had to make a physical working model and show in a presentation how the design would work.

Initially we planned the project out and moved onto researching the different types of renewable energy sources that we could possibly apply to our design.

We liked the idea of designing a childrenâ&#x20AC;&#x2122;s toy as it allowed us to have a little fun when ideating. A theme board was created and we used Post Its for initial ideas.

All the renders shown are all feasible lights that as a team we could make. Our gut instinct told us go with the car.

To start the model making off we first laser cut a chassis for a support to hold all four motors in place. Once we had that, the could base the size and form of the car off of that. An MDF mold was created using the power tools in the workshop. Once we had a mold we could vacuum form the shape to create the form. The motors where connected to a battery pack that was the power to the siren lights at the top of the car. The form was cut to shape and then sanded, primered and spray-painted to give visual authenticity. After most of the work was done we made decals for extra last touches.

Here is the model fully painted with working LED lights. The sirens give the car a playful tone.

To create this we Also the brief asked for there to be a SolidWorks model of the product. used SolidWorks. The project also stated that the calculations of the battery life and energy etc. must be stated. CAD drawings had to be created also with the a table of the bill of the materials.

For the presentation we were asked to create a poster for the light. We wanted a retro kind of feel so we looked at past classic car poster designs for inspiration.

Since the Polis Motor is such an odd shape it was difficult to put into a real life environment. Using an abstract approach let the car not look out of place.

DESIGN TWO As part of my Design 2 class, the brief was to come up with a child carrier that solved a problem that was identified in research. Once the research stage was completed in teams we had to generate concepts and use evaluation techniques learned in class. What is shown here is the second part of the class which was design a sub-assembly from a idea previously generated. Having many ideas to pick from I decided to focus on a wheel and really consider all of the details of the sub-assembly.

The project took over two semesters to complete as there were 4 parts to the assignment. The first part was the Research stage were in teams we were asked to find a problem with transporting kids and eventually present our findings. We focused on solving the problem of kids inhaling polluted air when around the city centre. Next was the Idea Generation phase were we had to use techniques to come up with ideas and evaluate them accordingly. Shown to the right is Jason Bell, an architect and more importantly a father who helped us with pointers and feedback with our designs. It was solo work after this

This brings us to what Iâ&#x20AC;&#x2122;ll be showing here. We were asked to pick a design and focus in on the one sub-assembly and design that. Everything from materials, cost, forces, manufacturing, and many more aspects had to be considered and shown in a folio that was the official hand in.

Picked a sub-assembly from one of my own sketches from the previous stage. I wanted to design the wheel which will allow the pram/carrier to move about.

More sketches of development were created to ideate what type of problems would arise when designing a prams wheel such as twigs getting jammed and form.

Manually drawing the wheel to judge the dimensions and shape was key before going into CAD as this allowed me to iron out any problems that occurred quickly.

Making a 1:1 scale model justified my drawings and then i was happy to take the wheel into CAD. I generated different style wheel spokes to see what worked

The wheel has a cap to avoid twigs and sticks to get jammed which would endanger the kid. The burst of yellow from the support bracket adds flavour visually.

The exploded view shows that there were 9 individual components used to make the wheel and the BOM showing there were 18 parts overall in the design of the wheel.

PET TECH The task was to come up with a business with Smart Home as the theme. For the class, the deliverables were a business plan, a video advert, and a Dragonâ&#x20AC;&#x2122;s Den style Q&A session. In a team which included two foreign exchange students, we knew we wanted to involve pets into the design. This class was about how to create a viable business plan using the business model canvas. Using what we learned, what follows is what we came up with.

Neighbour asked for my family to look after their little princess â&#x20AC;&#x153;Ladyâ&#x20AC;? whilst they went to work for the day. How can we make it easier leaving pets at home when going to work?

PERSONA Visual Board Lifestyle and theme board to convey user.

PetTech is a service with a collection of products that will provide pet owners with peace of mind when leaving their beloved pets at home.

PetTech are currently developing a small range of products that will help improve the well-being of the pet and owner.

With an app, the user can start purchasing a collection of tech pet products based on theirs and their petâ&#x20AC;&#x2122;s needs. All the products can be activated and monitored through the app.

Included in the range is the PetPod. Say youâ&#x20AC;&#x2122;re at work on a warm day and the pet is in the house. You can activate the water dispenser via the app to keep your beloved pet hydrated and improving the moral of you and your pet when not present.

PITCHING Dragons Den Pitch In addition to a business plan, the final hand in was a presentation in the style of a Dragonâ&#x20AC;&#x2122;s Den pitch. There were three dragons; the two lecturers who took the class, and a special guest from the working industry. Our branding is what they loved as they said it was very fitting to the market we tried to focus on. The logo was inspired by pets in a house. 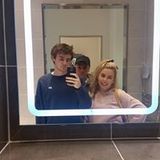