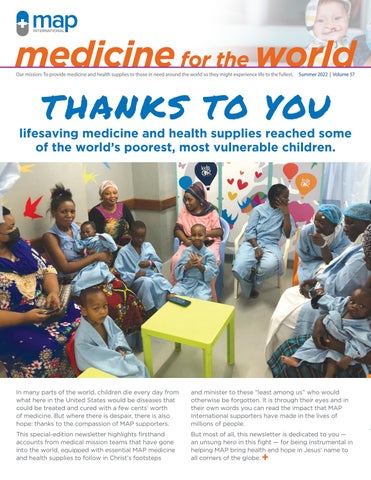 medicine for the world Our mission: To provide medicine and health supplies to those in need around the world so they might experience life to the fullest.

T HANKS TO YOU

lifesaving medicine and health supplies reached some of the world’s poorest, most vulnerable children.

In many parts of the world, children die every day from what here in the United States would be diseases that could be treated and cured with a few cents’ worth of medicine. But where there is despair, there is also hope: thanks to the compassion of MAP supporters.

and minister to these “least among us” who would otherwise be forgotten. It is through their eyes and in their own words you can read the impact that MAP International supporters have made in the lives of millions of people.

This special-edition newsletter highlights firsthand accounts from medical mission teams that have gone into the world, equipped with essential MAP medicine and health supplies to follow in Christ’s footsteps

But most of all, this newsletter is dedicated to you — an unsung hero in this fight — for being instrumental in helping MAP bring health and hope in Jesus’ name to all corners of the globe.

Supporters Like You Are Making a World of Difference “My giving is being transformed into life and health for the poor.” “I’ve always had an interest in medical missions,” says Dorothy R, a retired nurse who has been a monthly donor to MAP for the last 20 years. While God never led her to do foreign medical mission work herself, Dorothy says it gives her great joy to financially support those who are doing that work in the field. “It’s the privilege of doing what little I can do,” she says. Dorothy first heard about MAP through her uncle who was employed at Moody Bible Institute in Los Angeles. She had read the autobiography of missionary physician to Bangladesh Dr. Viggo Olsen, and then followed it up with MAP Founder

Ray Knighton’s book “Serving the Servants” which chronicles the story of MAP and how it was founded. “I was impressed with the way MAP started and developed into one of the most efficient medical missionary charities,” Dorothy recounts. “Newsletters from MAP had stories of skilled personnel going everywhere and anywhere, to bring medical care to the underserved and needy.” Dorothy touts the unique ability of medicine to open doors for missionaries to access remote places around the world for the sake of the gospel of Jesus. “To know that medicine was the vehicle

by which they could get into places that nobody else could get into… That’s big!” For her, offering physical healing for the poor is an opportunity to also offer spiritual healing – and, ultimately, lasting hope in Jesus Christ. “My giving is being transformed into life and health for the poor,” Dorothy says of her financial support of MAP. “That thrills my soul!”

“I like to give to organizations that use my money wisely.” Ms. Elizabeth Engelhaupt is a friend and faithful supporter of MAP International. In fact, she has been donating monthly to MAP since 1990. Why? Well, it all started with MAP’s founder, Ray Knighton. In the fall of 1947, Ms. Engelhaupt was a prenursing student at Northwest Nazarene College in Nampa, Idaho. During her two years of studies in Nampa, she enjoyed Ms Engelhaupt (right) returning home to Illinois each Christmas and participating in the choral production of Handel’s “Messiah.” It was there that she first met Ray Knighton who was singing in the choir. After finishing her pre-nursing program, Ms. Engelhaupt returned to her home state and received her Bachelor of Science degree in nursing (BSN) at the University of Illinois. After graduating, she worked in pediatric

orthopedics in Seattle, Washington. During a coffee break at work, Ms. Engelhaupt heard some coworkers talking about “the hope ship.” The SS Hope, a U.S. Navy ship that had been decommissioned was a civilian hospital ship that made 10 voyages between 1960 and 1974, delivering medical aid and health education to people around the world. They depended on medical professionals to volunteer their time for each year-long voyage. Ms. Engelhaupt decided to apply to join the mission team, where she served as one of 26 nurses on the ship as they traveled to Indonesia and Vietnam. Many years later, Ms. Engelhaupt made a visit to a friend who lived in Chicago. As they were chatting, she says, “I heard about MAP.” Her friend attended First Church of the Nazarene with the Knightons, and updated her on Mr. Knighton’s career shift from music to healthcare. He had founded MAP International in 1954 and was still in the business of matching up donated pharmaceuticals with physicians serving in impoverished countries. “I like to give to organizations that use their money wisely,” she explains. Because of the faithful generosity of donors like her, MAP has been able to provide health and hope to millions of people around the world who need it most.

Victoria receives lifesaving heart surgery because of you! Victoria and her family were praying for a miracle. The thirteen-year-old had a hole in her heart that needed to be surgically corrected before she suffered permanent damage to her heart and lungs. The problem was that Victoria lives in Nigeria and comes from a family that couldn’t afford the operation. Fortunately, the VOOM Foundation’s surgical team was in Lagos providing free heart surgeries to indigent patients, and Victoria was approved for her operation. MAP provided highquality sutures, state-of-the-art heart monitors, and medications to care for Victoria during her hospital stay. Thankfully, Victoria’s operation was successful, and the VOOM medical team finally got to see her sweet smile before she was discharged home with her family. Victoria’s parents no longer have to fear that their daughter may not make it into adulthood — now, this young girl has a second lease on life. “Lives are saved and families are transformed because you assist us to reach those in need!” AndayaPulliam, Executive Director of VOOM, wrote to MAP. “Our deepest appreciation for your support!”

Thanks to you, baby Grace no longer struggles to breathe! In the African country of Tanzania, 70% of its population lives in rural areas with little to no access to healthcare. There are only 0.02 physicians per 1,000 people in Tanzania. The Bugando Medical Center in Mwanza, Tanzania, does its best to treat every patient who walks through their door, but for ear, nose, and throat (ENT) conditions, the facility is understaffed. To help meet this need, Mending Kids, a MAP partner since 2013, sends a medical team to Tanzania each year to provide free surgical care for children while also training Tanzanian doctors toward medical sufficiency in their own communities. During the Tanzania ENT trip, Mending Kids crossed paths with little one-yearold Grace. Her mother had come seeking help because Grace’s breathing was noisy and congested — and her mother’s intuition told her something was wrong. When the Mending Kids team examined baby Grace, they diagnosed her with allergies and laryngomalacia, a condition that occurs when a baby’s voice box is soft and floppy. With this condition, each time Grace took a breath, part of her larynx above the vocal cords was falling inward and temporarily blocking her airway. For most babies, this condition resolves by the age of one, but for Grace, her condition required surgery to correct. Thankfully, Mending Kids has been partnering with MAP International for nearly a decade, and they had an ample supply of sutures with them. The medical team performed surgery on little Grace, and her operation was successful. Her mother was so grateful that her little girl could finally breathe well! In addition to Grace’s surgery, the Mending Kids team provided 24 additional children with free ENT surgery. “All procedures were successful with zero complications,” said Jeffrey Schare, Operations Specialist for Mending Kids. “Thank you for your help! We would love to continue our partnership for future Mending Kids missions!”

With your help, baby Angel is smiling! Baby Angel was born with a cleft lip and palate. At only five months old, life has already presented him with a host of unexpected challenges — even the most basic, instinctual activity of nursing has been next to impossible because of this deformity. Sadly, the social stigma of a cleft lip or palate is almost worse than the physical challenges. In Honduras, where Angel lives, society does not readily accept children like him into school, particularly if his language and speech development is hindered because of his cleft conditions. Getting a job as an adult is an even slimmer possibility.

told Austin Smiles that she could never repay them for the gift they had given her child. That week, 49 other children like Angel received life-changing cleft surgeries. Each of the children received not just a new smile, but a chance at living a “normal” life as they grow and develop.

After struggling for five months to learn how to care for Angel, his mother heard about Austin Smiles, a MAP mission partner who was visiting the neighboring country of El Salvador to perform cleft lip and palate repairs for children, free of charge. Angel was approved for surgery, and his mother traveled over 8 hours by bus so her child could be seen. The surgeons skillfully repaired Angel’s cleft lip, using Ethicon sutures donated by MAP. Angel’s mother

For the first time in her life, four-year-old Winnie can walk! Four-year-old Winnie, who lives in Liberia, was born with club feet and severe deformities in both legs. The stigma of having a child with such severe disabilities was too much for her mother, who believed the child was “witched,” and she quickly abandoned her baby. Winnie’s grandmother, Lucy, now cares for her. Because Winnie’s legs are so severely deformed, walking has never even been an option for her. Instead, she crawls, using her arms to drag herself through the dust in the dry season and the mud in the rainy season.

Winnie met the wife of a missionary pilot, who brought her to JFK Medical Center in Monrovia, where Dr. Kevin Strathy and his wife, Natu, have founded Liberia Medical Relief, an organization providing medical support to the people of Liberia. Liberia Medical Relief has supplied their surgical programs with donated, high-quality sutures from MAP International since 2015. Recently, Dr. Kevin’s twin brother, Gregg, visited the hospital to

Winnie had a series of procedures to correct the problems in her legs and “is currently learning to walk for the first time in her life,” reports Dr. Kevin. “We are hopeful. Despite her hardships, she is an absolute delight.” Winnie’s story, along with all the other children who experienced healing and are learning to hope again, “are true testimonials to the dedication and sacrifices made by people who truly care about humanity,” says Dr. Kevin. “They are also testimonials to the teamwork it takes to make ‘miracles’ possible. Thank you, MAP, for your support.”

Today, smiles are chasing away tears for so many forgotten people who now have health and hope because of your unwavering generosity. We dedicate our Summer 2022 Newsletter to our faithful supporters who make it possible for MAP International to carry out our calling to provide vital medicine and health supplies for a world in desperate need. We hope you’ve been encouraged by what you read. Please know, a gift in any amount will help ensure we have even more inspiring stories of hope to share.