An American Elegy for concert band by Frank Ticheli 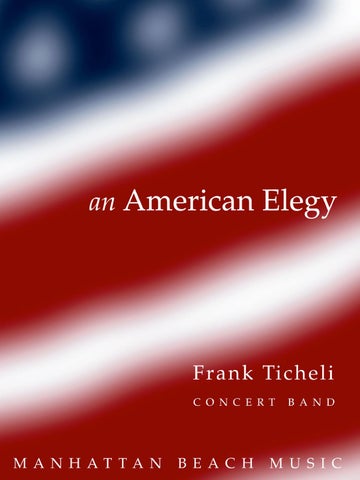 This virtual conductor score and recording are designated â&amp;#x20AC;&amp;#x153;private,â&amp;#x20AC;? and any publication or distribution beyond the web sites of Manhattan Beach Music without its permission is prohibited.

Composed in memory of those who lost their lives at Columbine High School on April 20, 1999, and to honor the survivors

An American Elegy is, above all, an expression of hope. It was composed in memory of those who lost their lives at Columbine High School on April 20, 1999, and to honor the survivors. It is offered as a tribute to their great strength and courage in the face of a terrible tragedy. I hope the work can also serve as one reminder of how fragile and precious life is and how intimately connected we all are as human beings. I was moved and honored by this commission invitation, and deeply inspired by the circumstances surrounding it. Rarely has a work revealed itself to me with such powerful speed and clarity. The first eight bars of the main melody came to me fully formed in a dream. Virtually every element of the work was discovered within the span of about two weeks. The remainder of my time was spent refining, developing, and orchestrating. The work begins at the bottom of the ensemble’s register, and ascends gradually to a heartfelt cry of hope. The main theme that follows, stated by the horns, reveals a more lyrical, serene side of the piece. A second theme, based on a simple repeated harmonic pattern, suggests yet another, more poignant mood. These three moods — hope, serenity, and sadness — become intertwined throughout the work, defining its complex expressive character. A four-part canon builds to a climactic quotation of the Columbine Alma Mater. The music recedes, and an offstage trumpeter is heard, suggesting a celestial voice — a heavenly message. The full ensemble returns with a final, exalted statement of the main theme.

Bridge (based on second theme)

Introduction (measures 1–14) The introduction, which was composed last, begins at the bottom of the ensemble’s register, and gradually ascends to an exalted statement of hope, setting the tone for the entire work. The crescendo into measure 9 should not be held back emotionally. Main Theme (measures 15–30) In contrast to the unrestrained energy unleashed in the introduction, the main theme is more reflective and serene. In my mind, it suggests the image of a head bowed in meditation or prayer, after having been lifted skyward during the introduction. The horns will bring an understated reverence and nobility to this melody. Episode (measures 31–46) The “tempo rubato” indication can be interpreted in several ways, and is left to the discretion of the conductor. Originally, I tried to show exactly where the tempo should

push ahead and pull back, but in early rehearsals I found these indications to be restrictive. Strive for a subtle elasticity, free and fluid, but not too disruptive. Second Theme (measures 63–96) The second theme is accompanied by a simple repeated harmonic pattern (I–V–IV–V) over a tonic pedal. In measures 71–78, the clarinet melody and accompaniment should move well into the background, allowing the oboe countermelody through. In measures 91–95 the melodic line vanishes, leaving only its harmonic framework. Perhaps the theme’s absence is more poignant than its presence. The intended effect is one of great ethereal beauty. One must observe carefully the cross-fading dynamics between the clarinets and saxophones. The saxophones should not use much vibrato here. Four-part canon (measures 97–110) This section functions as one long crescendo, moving from quiet lyricism to powerful optimism. One must strive to balance the four canonic voices (flute 1, clarinet 1, horn 1, euphonium). This becomes even more challenging as the four lines become reinforced by other instruments. Climax: Excerpt from Columbine Alma Mater (measures 111–113) The quotation of the Columbine Alma Mater is, in effect, a self-quotation. (After learning that Columbine High School did not have a school song, I composed one for them, and they adopted it as their official Alma Mater.) While composing the present work, I discovered that one excerpt from the new Alma Mater would serve beautifully as the dramatic climax — in effect, joining the two pieces at the hip. (The excerpt quoted is a setting of the words, “We are Columbine! We all are Columbine!”) Offstage trumpet solo (measures 118–127) This is the emotional heart of the work. The offstage solo should sound quite distant and ethereal, even other-worldly. I have found it insufficient to merely place the soloist backstage with the stage doors open. The sound is still too “present” in this configuration.

Perhaps the most ideal situation would be to place the soloist offstage with all stage doors closed, and furnished with a television monitor connected to a camera that is focused directly on the conductor. It is also possible to position the soloist behind the audience in a lobby or distant balcony. At the premiere performance, we found that merely placing the soloist in the top balcony did not produce the desired distant effect. We solved the problem by placing the soloist in the lobby behind the balcony (with the doors partially open so the soloist could see the conductor onstage). Measures 118 and 119 are unmetered. That is, the conductor should not attempt to conduct the individual beats of the offstage solo. Rather, his or her job here is to serve as a cue-giver, conducting the downbeats of each bar. (The downbeat of measure 118 marks the release of the whole notes held in measure 117. The downbeat of measure 119 marks the release of clarinet 1, and the entrance of flute 1 and clarinet 3.) The conductor returns to regular metered time in measure 120. I suggest that someone sit in the middle of the audience section to check the balance between the offstage soloist and the onstage players. Bridge (measures 128â&amp;#x20AC;&amp;#x201C;131) The initial oboe note should grow imperceptibly out of the the offstage trumpetâ&amp;#x20AC;&amp;#x2122;s final note, gradually taking over the foreground. Final Statement (measures 132â&amp;#x20AC;&amp;#x201C;157) The rising suspension figures from the introduction return here. At measure 138, while they are still ascending, the main melody returns. Both of these musical ideas progress simultaneously, creating an unsettling tension. The tension finally resolves as the two ideas drive to a common goal: the climax at measure 146. The energy recedes in a final moment of deep, prayer-like reflection.

Acidic paper has been in widespread use since the turn of the century, and has become the bane of archivists, librarians, and others who seek to preserve knowledge intact, because it literally will self-destruct as it ages. Some paper, only three or four decades old, already has become impossible to handle — so brittle it crumbles to the touch. Surely we do not want today’s music to be unavailable to those who will inhabit the future. If the music of the Renaissance had not been written on vellum it could never have been preserved and we would not have it today, some four hundred years later. Let us give the same consideration to the musicians in our future. It was with this thinking that Manhattan Beach Music in 1988 first addressed the needs of the archivist by printing all of its concert band music on acid-free paper that met the standards specified in the American National Standard for Information Sciences — Permanence of Paper for Printed Library Materials (ANSI Z39.48-1984). The standard was revised on October 26, 1992 to include coated papers; all of our new editions and reprints of older editions meet this revised standard. With proper care and under proper environmental conditions, this paper should last for at least several hundred years.

Technical notes: Paper permanence is related to several factors: The acidity or alkalinity (pH) of the paper is perhaps the most critical criterion. Archival paper (also known as acid-free paper, alkaline paper, and permanent paper) is acid-free, has a pH between 7.5 and 10, is tear resistant, has an alkaline reserve equivalent to 2% calcium carbonate (to neutralize any acid that might arise from natural aging of the paper or from environmental pollution), and contains no unbleached pulp or groundwood (no more than 1% lignin by weight). The specific standards summarized here are set forth in detail by the National Information Standards Organization in American National Standard Z39.48-1992. For more information, contact: NISO, P.O. Box 1056, Bethesda, MD 20827.

An American Elegy for concert band by Frank Ticheli