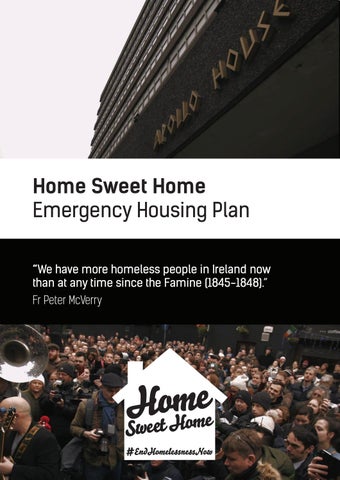 Home Sweet Home Emergency Housing Plan The current housing crisis in Ireland did not happen by accident. It is the result of failed polices by successive governments who have relied almost entirely on the private sector to provide housing to residents in Ireland. This policy has resulted in devastation for hundreds of thousands of families across the state.

The campaign demands are simple, realistic and achievable:

The Home Sweet Home Emergency Housing Plan can be broken into four sections.

Home Sweet Home is a campaign of housing activists, artists and trade unionists who believe the State cannot abdicate their housing responsibilities to the private sector any longer, and must now strongly intervene in housing to ensure everyone has a place to call home.

A) Address the needs of people who are

C) Build for people, not profits.

B) Stem the tide of homelessness.

D) Prevent a future housing crisis and ensure secure, affordable housing for all.

A – Address the needs of people who are homeless

There are currently no minimum standards for homeless services in Ireland.

5. All people who are homeless should be

Apollo House became a necessary intervention by people who felt morally obliged to offer dignity and support to people who are homeless who were sleeping rough in Dublin. There are many reasons for rough sleeping in Ireland today, one of which is the quality and standard of ‘beds’ and supports on offer from state funded services.

B - Stem the tide of homelessness

Apollo House offers a home to residents who can come and go as they please. They can have their own private room and there is a strict no alcohol and no drugs policy. Contrast this with existing services where up to 70 people sleep on mats on the floor of the internet café in Merchants Quay Ireland. Far too many people are offered a bed from 11pm at night until 7am in the morning and are only offered accommodation on a night-by-night basis. In fact, hundreds must start looking for a new place to stay from the minute they get up in the morning and this is entirely unacceptable. When they are lucky enough to find accommodation, many are forced into dorm style rooms, which are neither safe nor secure. Finland recently converted their entire emergency shelter system to actual homes for people (with their own front doors, keys and tenancies) as part of a housing first programme. This shows what can be achieved when there’s a political will. Our demands therefore are:

tion and domestic violence supports must be provided. allocated a key worker.

On average, 60 families per month lost their homes in 2016 and experts in the field of homelessness believe that excessively high figure will continue throughout 2017. There are a number of measures government could take which would reduce or potentially eliminate that figure with almost immediate effect.

lessness amendment’ which would prevent landlords who had bought a property with a buy-to-let mortgage, or availed of Section 23 property tax reliefs, from evicting tenants when selling their house. This measure alone could reduce new homelessness by up to one third.

2. Implement a moratoriam on evictions by

banks for those in mortgage arrears. There are approximately 600 families losing their homes annually due to bank evictions. If this moratoriam were to be implemented, combined with the above measure, it could wipe out new homelessness almost immediately.

3. Implement the demands of the ‘Secure

1. All people who are homeless should be of-

Rent’ campaign which would limit rent increases to the Consumer Price Index (CPI) along with providing more security of tenure.

2. All emergency beds should be guaranteed for six months.

4. End the practice of removing HAP and RAS tenants from the primary housing list.

3. All homeless residents should be afforded

5. A properly funded advice and information

fered their own private room, where requested, to provide safety and security for all residents.

24 hour access to rooms and not be evicted onto the streets on a daily basis.

campaign targeted at those at risk of homelessness.

C – Build for people, not profits The Minister for Finance was recently exposed stating that his policies in relation to housing are to increase demand which will in turn increase house prices making it profitable for landlords and developers to invest. For this policy to be successful, it would rely heavily on a restriction of supply in the housing market, and that is what is causing such devastation through increased rents and property prices. As Homelessness campaigner, Sister Stanislaus Kennedy said, “ We have played the market with people’s basic human needs. This is nothing short of indecent.” The private construction sector has openly stated that they will not build housing until unit prices increase so they can make a minimum of 15 percent profit. Therefore, the failure of the private market only leaves one potential option, government intervention. Logically, it also means that the government can build housing at 15 percent less cost, at a minimum, than the private sector, or could provide 15 percent more housing for the same costs. Home Sweet Home is calling for the immediate implementation of the following plans in order to tackle the current housing and homelessness crisis.

1. Provide 1,000 ‘Housing First’ tenancies for those in most need of immediate housing, including those in homeless shelters and chronic rough sleepers. 2. Provide a minimum of 1,205 homes for all

Housing Bodies, Credit Unions and local communities to increase the provision of affordable purchase and affordable rental accommodation including through the use of cost-rental, cooperatives, co-build housing, community land trusts and other initiatives.

that the right to a home be enshrined in the Constitution. Home Sweet Home is demanding a referendum to enshrine the right to housing in the Irish constitution based on proposals set out by the Mercy Law Resource Centre.

Provision of housing units In order to establish the real needs of the Irish public in relation to housing, an audit of the ‘hidden homeless’ needs to take place. This includes people couch surfing and young families forced to live with grandparents. It is essential that this housing crisis is addressed by building, buying and renovating appropriate accommodation for the needs of the public. Home Sweet Home is calling on the Minister for Finance to use his powers under the 2009 National Asset Management Agency Act to provide residencies and emergency accommodation to all those in need. Section 2 of the Act says among its purposes is, “to contribute to the social and economic development of the State”. Section 14 says: “The Minister may give a direction in writing to Nama concerning the achievement of the purposes of this Act.” Our campaign is calling for the Minister to suspend all sales by NAMA of land and assets and use its finances to deliver 10,000 new social and affordable housing units for families and low-income households. NAMA has recently built 2,000 units, which are to be sold to the private sector. This is completely unacceptable while so many people languish on social housing lists and in emergency accommodation. The Irish government must intervene and provide those housing units to the most vulnerable families which could remove every single child from emergency accommodation. There are currently 198,000 empty housing units throughout Ireland which could be

opened up to those who require a home. Home Sweet Home supports calls from Fr. Peter McVerry for the State to compulsorily purchase sufficient homes and to renovate and upgrade them where necessary. Home Sweet Home supports calls for the vacant land tax to be brought into immediate use, which would incentivize landlords and property owners to open up their properties, and should they not do so, the revenue raised should be ring-fenced for spending on social housing units. The Irish government should establish a state owned construction company which could provide housing at a much lower cost than the private sector.

Finance In order to achieve the above objectives, the government must commit to ceasing all tax cuts until the current housing and homelessness crisis has been averted. It is morally reprehensible that we have so far given more than €2.5 billion in tax cuts while homelessness has doubled and thousands of children are spending their childhoods growing up in hotel rooms. Furthermore, should borrowing be necessary, the National Treasury Management Agency (NTMA) has borrowed €500m at an interest rate of 0.81%. This low cost borrowing could provide up to 5,000 social housing units per year. In 2014 the Irish League of Credit Unions formally proposed making up to €5bn available for social and affordable housing schemes. Two years on and Government has yet to formally respond. This source of funding should be accessed as a matter of urgency. 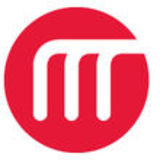