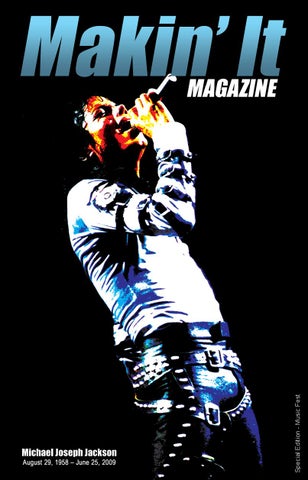 Better known by Bay Boy, Maurice Stall reps the West Coast to the fullest. He was born in San Francisco but has lived all over the bay area. His first single “Move Mean” off his debut album Sriscolian is already making noise across state lines being selected to appear on the On The Grind Mixtape Vol. VI. A self proclaimed “true lyricist” Bay Boy is not caught up in the West Coast Hyphe movement, he’s an artist that is geographically influenced by the West Coast, East Coast and the South which gives him a nationwide appeal. He accredits Tupac as the true West Coast influence that inspired him to jump into the booth to record his first song in 2006 over a Ray Cash beat and he hasn’t stopped rapping since. Bay Boy shares his lyrical talents with 4 | Makin’ It Magazine Music Fest Edition

three other rap groups in an attempt to gain as much exposure to his brand as possible. His groups include Two Stack Ent which consist of two of his cousins, Fun Filled Goon Squad and Can’t Fail Ent which is made up of another cousin and his big brother. Bay Boy is giving his music grind all that he has with a mixtape slated for release this fall with Two Stack Ent entitled “No Longer Silent”. Having already sunk $3k into his current album, Bay Boy is looking to connect with management and is seeking a major deal to back the project. For more information please contact (415) 424-5292 or via: Myspace.com/theyayboy www.wemix.com/7816 shaunymoe@hotmail.com

Born in New Orleans, Azitiz spent much of her life surrounded by music. Whether it was in the church choir or just listening to the saxophonists on the corners as a child, music was always present in her life. As a young adult she would soon discover her passion for writing, spending her days composing poetry, songs and short stories. It wasn’t until the unfortunate passing of her brother that she would seek refuge in her music. Music helped her make it through an extremely rough patch in her life and when she emerged from it her goal was to share her talents with the world. Five years later she is hard at work pushing herself as 6 | Makin’ It Magazine Music Fest Edition

an artist, producer and songwriter. Currently working her new project, a six song promotional CD entitled “Street 108” featuring fellow artist K-Tone, Azitiz is looking to build a good street team as well as connect with a publicist and strong management team. She also looks forward to connecting with other artist and producers to collaborate with as a songwriter. Azitiz is working with the Stop The Violence Movement of Atlanta. For more information visit her at Myspace.com/spiritsolja or call (386) 266-8908 or sankirtanpuri@ hotmail.com

Sitting in my office working on paperwork, my day was interrupted by a phone call from my wife telling me that Michael Jackson was dead. My initial response was “Michael Jackson Who?” Clearly she couldn’t be talking about Michael Jackson, Thriller Mike, Sequent Glove, moon walking, smooth criminal Mike. Nah, not that Mike. Had to be another Mike! But a simple search on Google quickly confirmed the news that few were ready to accept as fans.

smooth criminal lean. Reflecting on Michael’s extraordinary career and enormous body of work, you have to acknowledge the huge contributions he made to the music industry. Though he passes on to the next world, his impact will be felt for generations to come in this one.

With a career spanning more than 40 years and having sold more than 750 million records, winning 13 Grammys, and 13 #1 singles to his credit, Michael Jackson has secured his name in the history books as arAs a kid growing up in the 80’s guably the greatest entertainer ever we all struggled to perfect our to live. On June 25th the world lost moonwalk. I, myself, nearly got a one of its brightest stars. concussion trying to imitate that 8 | Makin’ It Magazine Music Fest Edition

As we all pay tribute to his memory it is important for us to remember that while he was not a perfect man, he was still just a man. Somewhere along his career I feel that many of us forgot this. No amount of money, fame or success can ever compensate for the frailties of the human condition.

will you cope with it when you find it?

The spotlight found Michael Jackson at a very young age and he would sspend the remainder of his life in it with the entire world watching. For all those that would make light of his life or death I ask you to take a walk in those shoes. The spotlight and the scrutiny of Spend forty years on public display the public eye will only intensify and see how you adapt to it. those aspects even more. So as many of you pursue your goals in Visit www.MichaelJackson.com and share your favorite memmothe entertainment industry it is important to remember that you must ries or thoughts with other fans. work equally hard to find yourself. Nobody is immune to the spotlight. The real question to consider is how Makinâ&amp;#x20AC;&amp;#x2122; It Magazine Music Fest Edition | 9

There is no shortage of books written about the music industry and ways to break into it. In my years as an independent artist I can assure you that I probably read most of them and while they were a wealth of knowledge, as an urban artist none provided a full view on the issues that affected me. By chance, In 2006 I came across the Music Powers book in South Dekalb mall. The moment that I opened it, I knew that I had found the book that I had spent the better part of 6 years searching for. Not only did it cover the traditional topics from the urban perspective, but it also covered issues that none of the other publications even touched on, such as leasing beats. In addition, the book was full of advice and jewels of wisdom from established industry professionals within the genre. 10 | Makinâ&amp;#x20AC;&amp;#x2122; It Magazine Music Fest Edition

As the publisher of Makinâ&amp;#x20AC;&amp;#x2122; It Magazine, I give my personal endorsement to the Music Powers book and highly recommend that every aspiring artist, producer, and industry mogul adds it to their collection. Visit MusicPowers. com today to purchase your copy or pickup the The Music Powers Professional Pack and receive the Music Powers E-Book, Professional Music Industry Contracts, Music Industry Management Hot Sheet and membership to the Music Powers 24 website, where you will receive access to tons of exclusive content like job and record pool listings, label contacts, and more! Do you Have a good Book, DVD or Website that should be in this section email us at editor@makinitmag.com

K Mack is a 16 year old Atlanta rapper who has been doing music since age 9. Now connected with CSP Music Group, he is polishing his skills as an entertainer. CSP Music Group is currently interested in finding promotional outlets for K Mack in the Southeast regional market. They are also seeking additional writers and producers to get involved with the project. For more information on K Mack, please contact Chris Starr at (404) 578-0440 or Starr@ CSPMusicGroup.com

Tre Snatch is a Florida hip hop artist with an eclectic style. He is currently working on his new mixtape “Lazy Hustlers Starve II” with Producer Chuck P and artists J Dot, J Baby &amp; Mr. Floyd. His goal for this upcoming release is to gain exposure in new markets. His promotional budget is $2-3k. He is looking to connect with DJ’s and industry professionals that can provide solid promotional outlets. For more info contact him at TreSnatch@ gmail.com or (305) 218-2421

CSP Music Group is an Atlanta based company specializing in music production, recording, mixing and mastering. Founded by veteran producer and entrepreneur Christopher Starr, CSPMG has been putting in a lot of work behind the scenes with both new and established talent. Over the past few months CSPMG has been busy working on submission material for such clientele as Walt Disney, Konvict Muzik, Hollywood Records, and artist such as Lady Ga Ga, Corbin Bleu, Steve Rushton, Trey Songz, sher, as well as various TV and film projects. More than a company, CSP is an alliance of dedicated music professionals including a talented staff of composers and song writers. Anthony Wright of Swag Inc. Has also teamed with CSPMG to add national &amp; interna14 | Makin’ It Magazine Music Fest Edition

tional promotions and a marketing arm for indie artists and labels. Always looking to expand the family, C. Starr keeps his eyes open for fresh young artists, writers, and composers with a good work ethic and a drive to succeed. CSPMG is currently working on the completion of a promotional compilation which will include unreleased records with: Christina Aguilera, Mary J. Blige (Remix), Tocha Scott of Xscape, and many others. CSPMG is looking network with all DJ’s, A&amp;R’s, PD’s and other music industry professionals as well as being added to any “Who’s Looking” mailing lists. CSPMG is also currently accepting demo submissions. For more information please contact Chris Starr at: www.CSPMG.com , Starr@CSPMusicGroup.com or 404-578-0440.

Preparing for the launch of his second street album “Morning Paper” Red –I is on a mission to put Knoxville, TN on the map. He has seriously been in the game a year with the release of his first street album last May entitled “Black Winter “ and the start of his label BMR a.k.a Blood Money Records which is home to his first two artist (Twin and Big Nate). Hard work coupled with the creation of quality music has gained Red-I notable accomplishments that include opening up for Yo Gotti and T-Pain at the Knoxville Coliseum. He continues to expand his notoriety with features on a variety of mixtapes. His current features include “She’s Cold” featured on Coast 2 Coast Vol. 52 hosted by Ace Hood and DJ Green Lantern’s Monster Mash Part 4 featuring his current single “Rumors”. He was recently the Battle of the Streets champion on Hot 96.3 in Fort Wayne, IN and his single “Ringtone” recently received spins at the University of Northern Florida for three months before it was retired. Red-I is an artist that takes his craft very seriously as he has plans of moving to Atlanta this fall to pursue his degree in Music Production and Engineering at the prestigious Art Institute of Atlanta. His goal: to keep him and his two artists relevant by dropping mix tapes every 3 months. Red-I is in search of a major distribution deal and he looks to connect with DJ’s nationwide, Publicist and A&amp;R’s. You can contact Red-I at redeyebmr@gmail.com. To hear his music, check out myspace.com/redeyebmr, bebo.com/redeyebmr and ning.com/redi Makin’ It Magazine Music Fest Edition | 15

In this special issue of Makin' It Magazine we partnered with The Firm Music Fest to pay homage to the King of Pop and showcase independent artist from around the country. 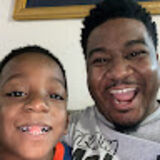