Artists of the Working Waterfront 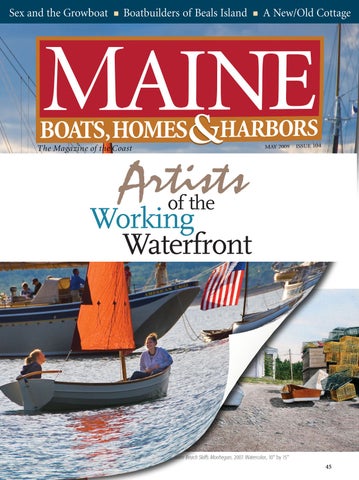 rtists A Working of the

Artists are part of the picture when it comes to bringing attention to this endangered element of the Maine coast. BY CARL LITTLE

VER THE PAST DOZEN YEARS OR SO, the collective attention of the people of Maine has been drawn to the â&amp;#x20AC;&amp;#x153;working waterfront.â&amp;#x20AC;? This element of the landscape has existed since Native Americans created middens on seaside headlands and settlers established fishing stations along the coast, so why this special interest now? Because the working waterfront is vanishing. Slowly but surely, the forces of development have been buying up the wharves and docks, fish shacks and sheds, whittling away at what most coastal denizens consider the beating heart of their part of Maine. At the

same time, most of the fisheries have nearly collapsed, thereby increasing the pressure on locals to sell off their property. Add the ravages of red tide and the recent downturn in lobster prices, and the picture is grim. You don’t miss your waterfront, the old-time country song might be rewritten, until your dock disappears. Fortunately, many Mainers have taken notice, and movements rivaling those for wilderness preservation have been launched, aimed at saving what remains of the working—and workable— waterfront. Initiatives from York County to way downeast are now in place to help rescue and maintain this most special element of our coastline. The Island Institute, which began publishing the monthly newspaper, The Working Waterfront, in 1993, has been leading the way, with the Land for Maine’s Future fund, Maine Coast Heritage Trust, Trust for Public Lands, and myriad other organizations and resources, public and private, providing key support. This past fall the Penobscot Marine Museum devoted its annual history conference to “The Working Waterfront.”

Artists play a role in bringing attention to this constant of the Maine marine landscape; they are part of a tradition that goes back several centuries.

All these efforts have begun to reap encouraging results. One recent victory, as it were: the restoration and expansion of the historic wharf at Port Clyde, where villagers unfurled a banner on the day of completion that read â&amp;#x20AC;&amp;#x153;Working Waterfront Forever.â&amp;#x20AC;? Artists play a role in bringing attention to this constant of the Maine marine landscape; they are part of a tradition that goes back several centuries. Fitz Henry Lane painted the harbors he visited on forays downeast from Gloucester, Massachusetts, in the mid-1800s. On Monhegan Island, George Bellows, Rockwell Kent, James Fitzgerald, and a host of other painters paid tribute to seafaring men hauling dories and cutting up fish. George Wasson had a keen eye for boatyards, from Kittery to Castine; and Marsden Hartley, returning to

his native Maine in the late 1930s, painted fishermen gathered on a dock surrounded by lobster traps. In more recent times, the likes of Leo Brooks, Philip Barter, Stephen Pace, William Thon, Connie Hayes, Don Stone, and Brenda Bettinson have painted these locales. The variety of subject and aesthetic is remarkable, from Barter’s stylized image of lobsterboats at anchor in an iced-in downeast harbor to Hayes’s painterly renderings of floats on Vinalhaven, from Stone’s iconic tributes to Monhegan fishermen to Bettinson’s cubist visions of boats in drydock on Barter’s Island. The six contemporary painters showcased here are equally intimates of Maine’s waterfront. Their paintings reflect the authenticity of first-hand knowledge—and a commitment that is at once personal and artistic. Watercolor painter Gregory Dunham traces his passion for the working waterfront to the 1950s, when he drove with his family through the back streets of Gloucester. The colors, smells, and sounds of the bustling harbor

Artists of the Working Waterfront captivated him and set him on course toward shoreline painting—and living. A friend and mentor, master printmaker Stow Wengenroth—the same artist who brought William Thon to Port Clyde—encouraged Dunham to explore the coast of Maine. After extended expeditions that included visits to Eastport, Lubec, and Corea, he and his wife settled in Castine in 1987. Since then Dunham has trained his eye primarily on waterfront subjects. In meticulous, light-filled watercolors, he renders the details of this world, be it a propeller perched on sawhorses or skiffs pulled up on the beach at Monhegan. Katharina Keoughan also focuses on the elements of working harbors. She lives in Friendship, a lobstering village surrounded by, in her words, “breathtakingly beautiful scenery,” yet on her walks along the shore, it is not the picturesque views she studies, but rather details that are at her feet: lobster traps, a clutch of bait bags, piles of pot warp, or a shadow cast across a skiff. Keoughan, who spent the first six years of her life on board a sailboat in the Caribbean, is often drawn to vibrant color. She admits to loving the vivid orange of Grundens, the foulweather gear favored by those who work on the water. She borrowed a friend’s pair to paint Grundies. “They were rough and worn and carried a pungent tang of bait that infused my stu-

dio with the smell of wharf,” she recalled. The fisherman’s habiliments became symbol and substance, representing, in the artist’s words, “hard work, banded claws, and traps sliding back over the side.” Stonington painter Rebecca Daugherty claims to be drawn to the shape of a boat “the same way some artists are drawn to the human figure or flowers.” She traces this infatuation to when she was 14 and her family moved onto a wooden sailboat they had built. “I suppose all the sanding, painting, and varnishing gave me an appreciation for the craft involved and made me look closely at the boat itself,” she said. Daugherty made her first drawings of boats in Newfoundland, where she found fishing vessels hauled up in a seaside field following a moratorium on cod fishing. She created a series of etchings based on this forlorn scene. A few years later, living on an island in Greece, she painted brightly colored fishing boats. Nowadays, Daugherty rows around Stonington Harbor in a small craft to get up close to her chosen subject. She is particularly taken with that nexus where a boat’s hull meets, and is reflected in, the water. Skiffs, dinghies, fishing boats, yachts, and schooners all fall within her purview—and her view: her studio overlooks Fish Pier. Painter Helen St. Clair strives for a somewhat ethereal qual-

Artists of the Working Waterfront ity in her paintings, where mood and feeling are “of greater significance than the subject.” Vacationing on the coast of Maine for more than 40 years and living in Boothbay Harbor for 25 years has had a great impact on her work. St. Clair is also taken with the individuals who make their livelihood from the sea. Of special interest are the women who prepare fish for market. Wearing headscarves and aprons, these somewhat ghostly figures attend to their cutting and cleaning. They are heroic by dint of their arduous occupation. Painter William Irvine traces his profound connection to the sea to the fact that he grew up in a small Scottish town on the Atlantic Ocean. After he moved to the United States in the mid-1960s, he eventually found the New England equivalent of his childhood home in the town of Blue Hill, where he has now lived for more than 35 years. “I think I have salt water in my veins,” he wrote, “and feel very much at home here among the islands, the fog banks, and the excited gulls.” As a painter, he feels a need to relate to that timeless environment with as much honesty as he can. In canvases that hark back to Marsden Hartley and John Marin, Irvine sets sailing ships heeling on distant waves and builds stylized clouds over sturdy islands. In a recent series of tabletop still lifes, he seeks to create a “universe of relationships, of belonging and of isolation.” The Lobsterman’s Table

is a painting, Irvine noted, “where everything has found its proper place at the table,” including a crumpled copy of the Bangor Daily News. “Even the herring seem content to be a part of the celebration,” the painter added. Tina Ingraham began her professional life as an artist in 1969, when she did a painting of the old wringer washing machine on the back porch of the Norway Pines House on Lake Sysladobsis in Washington County. Since then she has moved about, living in New York and Perugia, Italy, among other places, as well as Cumberland, Maine (she taught several semesters at Bowdoin College), where she designed and built a home and studio in 1989. In New York City at the time of the attacks on the World Trade Center, Ingraham realized, in her words, “the importance of being home.” She returned to Maine, drawn by memories of raising her children there and of favorite old haunts. “I knew where the best ice cream stands were, the best lunch diners and hamburger spots, and I had painted most of those places,” she recalled. She settled in Bath, where she continues to build “a beautiful life.” Over the past several years Ingraham has painted a series of portraits of Portland’s Custom House Wharf. Working from the Portland Pier side “at all tides and all times of the day,” she paints the light as much as the weatherworn structure. “It is a special

place,” Ingraham writes, representing “the heart and most vital aspect of Portland— its history, its working waterfront, and, most importantly, its fishing industry.” THE FUTURE of Maine’s waterfront weighs on the minds of the artists featured here, each of them testifying to the vibrancy of this distinctive milieu. Gregory Dunham is especially direct in his concern. In the 20-plus years he has lived on the Maine coast, he has witnessed change that disturbs him. “The lobster

Their art and words remind us of the beauty and poetry—and absolute necessity— of the working waterfront. traps have disappeared from a lot of wharves,” he observed, “as pressure builds to turn working waterfront into a cash machine for property taxes.” What we lose in the process, he warned, “is a way of life that has attracted generations of artists to Maine and an inspiration to generations of artists yet to come.” By lending their paint to the cause, so to speak, Dunham and company help preserve an ever more precious mainstay of the Maine coast. Their art and words remind us of the beauty and poetry— and absolute necessity—of the working waterfront. Carl Little contributed an introduction to the forthcoming Portrait of a Maine Island, a collection of photographs by Sarah Butler. He writes for Working Waterfront, Island Journal, and this magazine. For more information about these artists, visit the websites of the following: Caldbeck Gallery, Courthouse Fine Art, Firehouse Gallery, Gleason Fine Art, Greenhut Galleries, Isalos Fine Arts, Leighton Gallery, George Marshall Store Gallery, and West Island Gallery. www.maineboats.com

Artists of the Working Waterfront

Artists are part of the picture when itcomes to bringing attention to thisendangered element of the Maine coast.BY CARL LITTLE 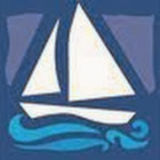