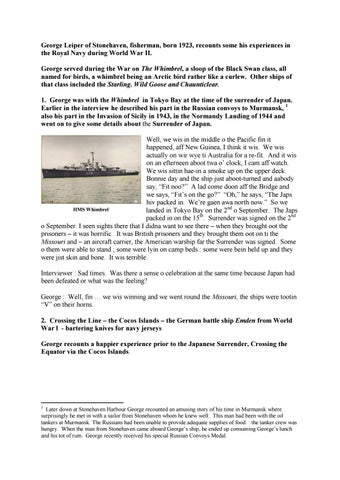 George Leiper of Stonehaven, fisherman, born 1923, recounts some his experiences in the Royal Navy during World War II. George served during the War on The Whimbrel, a sloop of the Black Swan class, all named for birds, a whimbrel being an Arctic bird rather like a curlew. Other ships of that class included the Starling, Wild Goose and Chaunticlear. 1. George was with the Whimbrel in Tokyo Bay at the time of the surrender of Japan. Earlier in the interview he described his part in the Russian convoys to Murmansk, 1 also his part in the Invasion of Sicily in 1943, in the Normandy Landing of 1944 and went on to give some details about the Surrender of Japan. Well, we wis in the middle o the Pacific fin it happened, aff New Guinea, I think it wis. We wis actually on wir wye ti Australia for a re-fit. And it wis on an efterneen aboot twa o’ clock, I cam aff watch. We wis sittin hae-in a smoke up on the upper deck. Bonnie day and the ship just aboot-turned and aabody say, “Fit noo?” A lad come doon aff the Bridge and we says, “Fit’s on the go?” “Oh,” he says, “The Japs hiv packed in. We’re gaen awa north now.” So we HMS Whimbrel landed in Tokyo Bay on the 2nd o September. The Japs packed in on the 15th. Surrender was signed on the 2nd o September. I seen sights there that I didna want to see there – when they brought oot the prisoners – it was horrific. It was British prisoners and they brought them oot on ti the Missouri and – an aircraft carrier, the American warship far the Surrender was signed. Some o them were able to stand ; some were lyin on camp beds : some were bein held up and they were jist skin and bone. It wis terrible. Interviewer : Sad times. Was there a sense o celebration at the same time because Japan had been defeated or what was the feeling? George : Well, fin … we wis winning and we went round the Missouri, the ships were tootin “V” on their horns. 2. Crossing the Line – the Cocos Islands – the German battle ship Emden from World War l - bartering knives for navy jerseys George recounts a happier experience prior to the Japanese Surrender, Crossing the Equator via the Cocos Islands.

Later down at Stonehaven Harbour George recounted an amusing story of his time in Murmansk where surprisingly he met in with a sailor from Stonehaven whom he knew well. This man had been with the oil tankers at Murmansk. The Russians had been unable to provide adequate supplies of food : the tanker crew was hungry. When the man from Stonehaven came aboard George’s ship, he ended up consuming George’s lunch and his tot of rum. George recently received his special Russian Convoys Medal.

We wis on the way, on wir road ti, aye oot ti the Pacific. And we had to go doon to the Cocos Islands. And nane o us hid – we hid ti cross the Line gaen doon there because when we wis in Colombo, they asked us if we would divert ti the Cocos Islands ti deliver rum ti a survey ship. They hid run oot o rum. So we took ten gallon drums, a cask o rum aboard for them. So we went doon there and it wis a great thing ti see the Cocos Islands. That’s far the Emden was sunk in the First War, the German battleship. And a lot o the German sailors went ashore there and never went back ti Germany. And they mated up wi the natives and it was great ti see them, the youngsters, aye ken, the young eens there. They were dark-skinned wi European features. An fit they wanted – they cam oot ti us, aye in their sma boats like, tryin to trade us knives, ye ken like daggers and big knives made oot o the steel o the Emden. And ye know what, they didna want money for them. They wanted navy jerseys. If ye gied them a jersey, ye’d hae gotten a big knife. It was jerseys they wanted. Nothing else. George in uniform

Details from Crossing the Line Well, we rigged up a tank on the deck, filled it o water and put in Condy’s Crystals. That turned the water reid and there wis a chair in the middle o the thing and there wis lads in there and ye wis thrown in, putting inti the chair, soaped and shaved and then ducked. I wis doon the engine room fin they cam for me. There wis lads detailed aff as policemen ti ging and collect ye. Well, they took me oot o the engine room and took me up there. But I took aff mi biler suit first. King Neptune was there. Rope for hair and aa that. He had a trident. They made aa that. Oh it wis good. Fin he cam aboard, the – we wis steamin at the time and he cam up. The lad climbed up ower the stem o the boat and walked doon the deck and the Skipper wis wi him. And I didna see this but they said somebody put twa taisl o rope across the deck and he said to the Skipper, “What’s that?” He says, “That’s the mainbrace, sir.” He says, “Well, splice it!” We didna get an extra tot o rum though George did get a certificate, beautifully decorated which reads : To All Sailors around the World : Be it known to all ye landlubbers, loafers, beachcombers, politicians, quislings and other who may be honoured by this presence that George K. Leiper has been gathered to our fold and from now and forever should enjoy our Royal Protection and is exempt from further homage. Signed : Neptunis Rex

3. Making water George’s job as a stoker frequently involved distilling water which was needed in large quantities. George supplies some details. The main job wis to make water, fresh water, wi an evaporator, wi steam coils intil it. We used sea water and by the time we had processed it, it became pure, distilled water – nothing in it. It had ti be pure distilled water because the boilers couldn’t use anything else. It wis

turbines we had. We needed a lot of distilled water. Well, we’d ti make water for the crew and make water for the boilers. I wid say the evaporator run 16 ti 20 oors a day. Ye hid ti stop for mebbe four, mebbe eight oors to clean the coils cause they got encrusted wi salt. Interviewer : And this water was perfectly fine for drinking as well as washing clothes and stuff? George : Use it for everything. It wis horrible ti drink cause it had no taste. The only thing was when we made water for the crew, we used ti let over a little drop o salt ti give it taste. But ye couldna put on salt for the boilers cause we hid steam turbines and they didn’t like salt. 4. Overfishing After the War George returned to seine net fishing at Stonehaven. He reflects on the decline of the industry, blaming the overfishing on a number of factors, including greed A lot o’t greed. They didna ging for a livin : they wanted to see how much money they could maak. So they overfished a lot. A lot of fish was teen. For the inshore fishing the fish wis caught afore they could get ashore. There wis bits that the boats wis fishing among and they were getting aboot a hundred boxes a haul and they were only putting aboot five or six boxes o that doon the hold and the rest wis thrown back inti the sea. Ower sma. But once ye tik a fish ti the surface that’ s it. So that wis a lot o waste. George with Stonehaven Harbour and shoreline in background. Greed. They should hae left them. I doubt it’ll ever come back. The inshore fishin – it’s finished. Aye. It is sad, isn’t it? Things is modernised now compared ti fin I started. Itherwise aathing’s jist similar. The trawlers are gaen awa with the feedin an aa. That’s the biggest problem. If there’s nae feedin, ye’ll get nae fish. Well, the trawlers fin they ging on the hard boddom, they ging on fit a lot them caas dead man’s fingers, ye ken, ruttocks we caa them. Well, there s a lot o feedin clings ti them. They’ve been aa trawled aff the hard boddom, so there’s nae feedin. An then, one o the biggest problems, I wid say is them fishing for sand eels. That is feedin for the fish. It wis feedin for the birds. Now the birds are sufferin and the fishermen are sufferin. Aye the sand eels is a disaster. Pickin them up. Ye nevir see the kills o gulls, ye ken now, di ye? Well, that wis aa sand eels that they were feedin on. But then it wis the fish that wis underneath the sand eels pushed onti the surface. Now there’s nothing underneath ti push onti the surface.

These are extracts of an interview of Mr George Leiper of Stonehaven by Celia Craig about his early fishing memories from boyhood through to adulthood – on 21 September 2006. 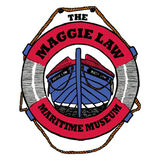