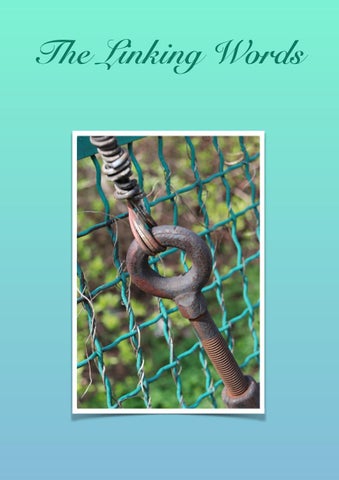 ! The works published in this volume were written for an international literary project inspired by the motto of Museo de la Palabra: ”The word is the link between people, and the language is the structure that unites us and singles us out as human beings”, and also by the mail art project entitled We Share the Ancient Skies.

! In grammar, linking words are used to combine and connect ideas. The prose and poems written within this project are linking words in the sense of connecting people living under the same ancient skies.

A pair of swallows Hurtling up and down Arrival of spring

! Cosmos Y They dreamt as they looked way up high  At the beauty that is our sky  Then wondered how they could fly?

Then thunk their thoughts with might To solve the conundrum of flight  And so they who, invented the kite,

Designed, inspired by insect and bird Further they went I have heard  As vision for them was ne'er blurred

Alas the kite is held by string, The cleverest men from Peking  Wondered how to be the cosmic king

To share the wisdom of mankind Carving knowledge of stars, aligned  Always sharing everything they find

So this I think is why we ask the question, why? Because we dream the dream of how to fly  When we look into the beautiful night sky

The word is a link between people

I´ll remember you in the vast in the sun, the moon, the stars I´ll tell stories about you stories that only you and I knew

I Wish to Speak in Silence

And with no words, watch And while watching, latch  on change, that cannot be changed    on sameness, that shall not stay the same    on the bodies I wish to hold,          warm or cold And while latching, want to speak what cannot be spoken in hope that, for a moment,     with kisses, defy death     with breath, create life          (That is here to stay.)

I wish to speak in silence. Still speak, but in language impregnating     the gaps in utterance       the lapses in judgment       the tension in relation giving birth to meaning, to its absence, to a purpose for sentience in hope that I will not long as much       for the company I cannot keep       for the words I cannot say  if I should long at all.

My earliest memory? Sitting on a potty in the middle of the night, my dad’s big hands supporting me mid-sleep. He insisted I pee, unaware that I also had undies on. So we argued a little until he believed me. I loved falling asleep holding his hand to my cheek. I felt so safe and loved.

He reads a lot, always had. It’s like a compulsion; he cannot resist a written word. Mum was telling me about his futile attempt at painting a room. When she requested he protects the floor with old newspapers, he had to read each of them. Otherwise, the knowledge would be lost. He collects books. I can only imagine how frustrating it must be amongst thousands of beloved books, being able to read only one at a time.

My dad was my greatest love. He could do no wrong. He was handsome, wise and omnipotent. Also rather absent, which made him all the more wanted. The betrayal came with him taking up a post abroad. I was five. He was coming home every two – three months for a few days. These were very special times. I remember waking up and discovering a changed kitchen landscape that signaled his return. All the benches were covered with the items he brought from Belarus, strange looking and foreign smelling. I was lavished with toys and unusually tasting treats. An avid reader from age four, I was equally obsessed with deciphering the unfamiliar alphabet on the intriguing objects spread in the kitchen.

Oh, how I resented the toys. Their presence constantly reminded me of his absence and my abandoned soul.

Then there were his letters. Reaching out to me, belying the abandonment. Full of love and longing, gut-wrenchingly sad. A blackand-white baby hedgehog photograph, a pencil scribbling on the reverse that he came across it in the forest; that he so wishes I was at his side to see it with him.

”Why did he have to go?” I asked Rita, the pouty doll he brought for me. She did not say anything, just looked from under her half-closed plastic eyelids, stiffly reclining. Maybe my words could not cross the barriers between us. Firstly, her not quite being human, but her somewhat floppy neck connection did not bode well for our chances to find the linking words.

Those dark blue eyes looking down on me, with HER thin cracked lips she controls every being in me, under HER glare I do but quiver, shake, look down, quick yes it`s the trigger,

A quick slap HER hand lovingly delivers, my red check gives a sharp reminder of my position, HER anger I can hear, teething, screaming, bells now ringing in my ear,

Don`t leave HER room I hear, don`t leave HER side HER mouth seers, HER house HER shadow, I`m under HER skies it`s all I`m permitted, it`s everything I despise,

HER guardian I`ve become, HER mum, now I have none, and with a Salome face I blurt out loud where`s my life, my emotions, my voice or my guide,

No it`s no longer possible, I shake my head, no point in believing I feel just dead,

But wait there`s no grace, no release from HER sky space, from under my lashes I see HER monstrous face, there must be some sweet release, another sky, another space,

Don`t go there I`m told, don`t speak to him it`s not proposed, come back to your place, in my shadow, my sky space, once again yet I fear, it`s all I know, it`s everything I hear,

There`s that dangerous thought creeping in once again, I usually push it away, but I`ve let it stay, stay it does, let it grow, let me grow, let me see a new way, a new road, a new play?

There`s that crack in HER sky I can`t ignore or disguise, I should creep through and try, get away from HER clutches, something must give and so I strive,

Don`t go HER mouth screams, leave me and I will crush all your dreams, don`t disobey HER voice says, she wants to put me down yet again,

But now look am I free? I have my own sky space, my own love, my family, just these shackles I must release, to achieve my true freedom, to be with others who are free,

So I push them off, I feel so free no longer will HER face be able to control me

HER dark blue eyes which no longer dare, HER thin cracked lips can no more flare,

HER spit, HER hands, HER screams for which I no longer care, I`m finding my own sky space, within this universe,

Queen of my heart

Mother, mother My heart is always calling you My life would be nothing without you You know I faced hard moments It's true But in the darkness your love was the light to guide me through

Oh Lord! I am thankful for each day Her love was by my side, and I pray To see my children growing with her and say Mama, grandma You're the Queen Come what mayâ&#x20AC;Ś

For countless years in a crowd I strolled around a vast and sunny plain. The place was safe and warm and whole, so perfect I felt it was feigned.

The people looked a lot like me. ’t was hard to tell us all apart, but when I tried to talk to them, alas, they spoke a different tongue.

Then came the day when I was sure I had to go or I would fade, and though I chose a weedy path, I felt there’s something at its end.

It did get lonely when I walked, and sure I had so many doubts, but the serene and ancient skies were always there when I Iooked up.

Then one day footprints could be seen and next some other footsteps joined. I knew that finally we will meet, and thus I felt alone no more.

Each day the prints more obvious grew, and when I finally reached the end, I saw two persons by a gate: one’s skin was black, one wore a veil.

And strangely, as we three sat down to wait until the gate’s unlocked, we tried to talk, and it turned out we shared the language that we spoke. 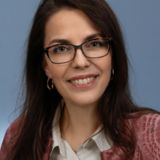 The works published in this volume were written for an international literary project. The poems and prose written within this project are l...

The works published in this volume were written for an international literary project. The poems and prose written within this project are l...