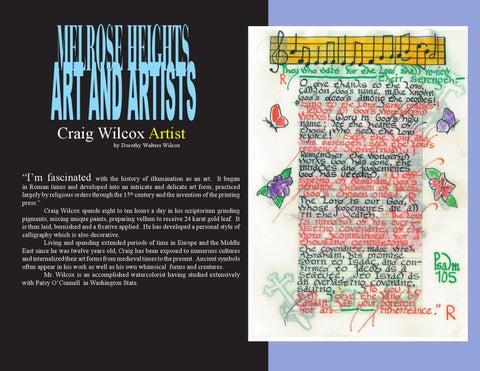 with the history of illumination as an art. It began in Roman times and developed into an intricate and delicate art form, practiced largely by religious orders through the 15th century and the invention of the printing press.” Craig Wilcox spends eight to ten hours a day in his scriptorium grinding pigments, mixing unique paints, preparing vellum to receive 24 karat gold leaf. It is then laid, burnished and a ﬁxative applied. He has developed a personal style of calligraphy which is also decorative. Living and spending extended periods of time in Europe and the Middle East since he was twelve years old, Craig has been exposed to numerous cultures and internalized their art forms from medieval times to the present. Ancient symbols often appear in his work as well as his own whimsical forms and creatures. Mr. Wilcox is an accomplished watercolorist having studied extensively with Patsy O’Connell in Washington State.

An is a manuscript in which the text is supplemented by the addition of decoration, such as decorated initials, borders and miniature illustrations. In the strictest deﬁnition of the term, an illuminated manuscript only refers to manuscripts decorated with gold or silver, but in both common usage and modern scholarship, the term is now used to refer to any decorated or illustrated manuscript from the Western traditions. Comparable Far Eastern works are always described as painted, as are Mesoamerican works. Islamic manuscripts are usually referred to as illuminated but can also be classiﬁed as painted. The earliest surviving substantive illuminated manuscripts are from the period AD 400 to 600 (also in the gothic period), primarily produced in Ireland, Constantinople and Italy. The signiﬁcance of these works lies not only in their inherent art history value, but in the maintenance of a link of literacy offered by non-illuminated texts as well. Had it not been for the monastic scribes of Late Antiquity, the entire literature of Greece and Rome would have perished; as it was, the patterns of textual survivals were shaped by their usefulness to the severely constricted literate group of Christians.