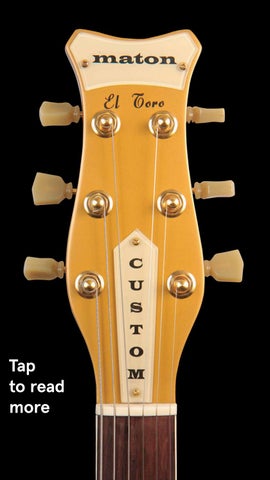 The Wadih Hanna collection Instrument and art collector Wadih Hanna has been an avid guitar player since he was 12. His passion for Maton instruments began when his wife Lucy gifted him a Maton EM325C acoustic guitar for their wedding engagement. Meticulously researched, the Wadih Hanna personal collection is a comprehensive documentation of Maton instruments over 70 years by a consummate guitar curator. All guitar, amp and headstock photographs by Wadih Hanna.

The beginning Tap to view guitars 1–6

The beginning In the early 1940s, Bill May quit his job as a teacher and started a guitar manufacturing and repair company in Melbourne. Due to its growing success, May invited his brother Reg, a wood machinist, to join the business. They made their first commercially available instruments in 1946, under the name Maton Musical Instruments Company. Maton comes from the surname ‘May’, and the word ‘tone’. Now referred to as Maton Guitars or Maton, the company has remained a family-owned business.

Uniquely Maton Unlike many other manufacturers, Maton has never been concerned about making copies of established American guitars. Instead, the company focuses on creating original instruments using high-quality Australian wood. These include the strikingly unique Fyrbyrd Shark Bite, Ibis and Flamingo, and Matonâ&#x20AC;&#x2122;s signature Mastersound series known for its innovative design and versatility.

The only one ever made.

A reissue of the 1958 MS500 celebrating the 50th anniversary of the Mastersound.

A rare example featuring a Fyrbyrd-style headstock at the neck of the guitar.

The first Wedgtail ever produced.

One of only two of its kind, played and signed by Australian guitarist Tommy Emmanuel.

This jungle green colour is a signature finish on Maton electric guitars.

Jazz Jazz guitarists favour archtop, hollow-body guitars with a floating bridge that allows for a wider range of different sounds and tones. The combination of the broad soundbox, electric pickups and amplification provides the ideal backdrop for jazz chord voicings and improvised solos. Australian jazz great George Golla is a dedicated Maton player, and his signature Maton model is featured here.

43. Acoustic/Electric M5 1981 Designed with jazz musician and teacher Barry Morton, this was the first one produced.

Made for Alan Hawking of Australian country music band The Hawking Brothers.

Owned by Russell Hawking of The Hawking Brothers.

Ukuleles The national instrument of Hawaii, the ukulele resembles a small guitar that varies in size and construction. Maton first made ukuleles in the late 1960s and early 1970s, and has again recently picked up production. Maton ukuleles are produced from Australian tone woods, including Victorian blackwood and Queensland maple neck, which create rich and full sounds.

Bass guitars Electric bass guitars became popular in the 1950s because they were small, light and easy to play. Maton bass guitars are among the most diverse and original in the world and have a following of devoted users, including bass master Clive Harrison, Australian blues band The Chainâ&#x20AC;&#x2122;s Barry Oâ&#x20AC;&#x2122;Sullivan, Garry Beers from INXS and Brian Richie from Violent Femmes.

72. Electric BB66 Big Ben 1959 The Big Ben is the first bass guitar to be commercially manufactured in Australia.

The first of the Maton hollowbody basses.

A rare left-handed model set up to be played right-handed.

95. Electric MGB5 1988 A very rare five-string Maton bass, one of only eight in the world.

Rock ’n’ roll Influenced by jazz, blues, country and soul, rock ’n’ roll music focuses on the guitar and the range of dynamic sounds it creates. Over the years Maton has innovated and custom-designed electric guitars, attracting some of the world’s most interesting rock guitarists, such as Ray Davies from The Kinks, Josh Homme from Queens of the Stone Age and Brody Dalle from The Distillers.

With a very rare gold finish.

Inspired by John Lennon and George Harrisonâ&#x20AC;&#x2122;s use of the Rickenbacker 325 during Beatlemania in the 1960s.

Amplifiers Maton began manufacturing amplifiers in the early 1950s so that each of their guitars were sold with one. The company continued making them until the 1970s, including a professional range. Primarily tube amplifiers, which use vacuum tubes to boost the power of a signal, Maton amps are beautiful remnants of great Australian design. 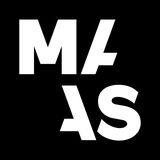