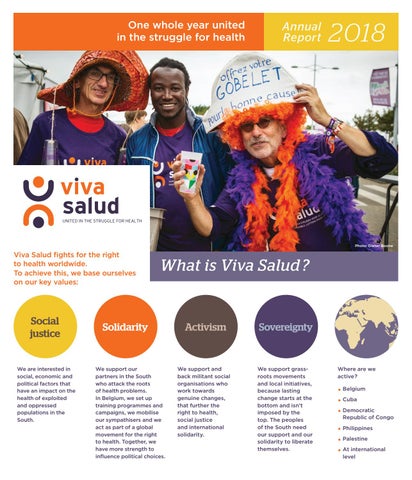 One whole year united in the struggle for health

UNITED IN THE STRUGGLE FOR HEALTH

Viva Salud fights for the right to health worldwide. To achieve this, we base ourselves on our key values:

We are interested in social, economic and political factors that have an impact on the health of exploited and oppressed populations in the South.

What is Viva Salud ?

We support our partners in the South who attack the roots of health problems. In Belgium, we set up training programmes and campaigns, we mobilise our sympathisers and we act as part of a global movement for the right to health. Together, we have more strength to influence political choices.

We support and back militant social organisations who work towards genuine changes, that further the right to health, social justice and international solidarity.

We support grassroots movements and local initiatives, because lasting change starts at the bottom and isn’t imposed by the top. The peoples of the South need our support and our solidarity to liberate themselves.

Where are we active ?

Social surveys among the population.

Training on the right to health for members of popular health committees . Raising awareness of the causes of ebola and its prevention in affected communities.

Result The authorities of North Kivu were impressed by the actions undertaken by the Etoile du Sud health committees in the fight against Ebola. They asked our partner to organise information and prevention sessions in schools to stop the virus spreading.

Local actions: cleaning the streets, demonstrations for the right to health or women’s rights, questioning the local authorities.

2018 was marked by the elections. Our partners set up popular election committees where they held workshops on the way the population can call upon leaders to put the right to health on the political agenda. Through these committees, our partners will now remind the newly elected members of parliament to respect the promises they made.

Following up on the promises made by the authorities. Themes: gender, water, healthy environment, community participation.

Marie-Paul is active in a ‘gender village’, an Etoile du Sud project that promotes equality between men and women :

“Before, I would hardly dare speak in the presence of men. Until I did a training session organised by Etoile du Sud. I realised that I shouldn’t feel inferior as a woman. Now, I’m leading a project where I teach young girls to become independent.”

Étoile du Sud is launching a new website and is active on social media.

Workshop with Intal members during a solidarity trip to Congo: making videos with a smartphone to further encourage people to take action.

Result Thanks to the lobbying and mobilisation of our partners and other progressive health organisations, the House of Representatives of the Philippines approved a bill banning the privatisation of public hospitals. For this law to be passed, it currently requires the Senate’s agreement.

Challenge Activists and human rights organisations had a difficult year in 2018. The government’s so-called war on drugs is actually aimed at the opposition and has created a climate of impunity and the violation of fundamental rights. But this will not prevent our partners from continuing their fight for the rights of the Philippine people in 2019.

Virginia active in the CHD  :

“Over the past few years, I’ve taken part in demonstrations to preserve the Fabella public hospital. Why ? Because I’m a woman and a mother. Not having the money to give birth is unacceptable ! Fabella is our only option.”

4 PARTNERS Council for Health and Development ( CHD ) + Gabriela + Karapatan + Climate Change Network for Community Initiatives ( CCNCI ) REGION at national level With her #Babae Ako, Lalaban Ako ( #I am a woman, I will fight ) campaign, Gabriela is rising up against the male chauvinism of President Duterte. TIME magazine named this campaign as one of the most influential on the internet in 2018.

Karapatan organised a remarkable action against repression under the presidency of Duterte. The traditional feast of the Virgin Mary in May adopted a new look. This didn't go unnoticed in the Philippine media.

On 22 April, Earth Day, our partner CCNCI organised an action at the University of the Philippines for more unity in the fight against climate change. More than 100 students made their voices heard during a climate march.

What we do Training young people on the right to health and local social actions ( surveys, actions through social media, organising actions, etc. ).

Summer camps where young people from different regions share their experiences and prepare for campaigns on a national level.

Result With the support of our partners, young people from the different regions of Palestine have set up a network of youth movements. The objective is to learn to know oneself better in order to lead more specific actions together, despite the repression and the attempts of the Israeli occupation to divide them.

The network offers young people a safe space to share their ideas and opinions. However, the arrests of youth leaders are a challenge for the stability and impact of the youth movements in Palestine. Despite the repression and all the other obstacles, our partners continue to support young people in their fight for their rights.

Networking at national and international level, where our partners assume leadership for campaigns ( e.g. on health insurance, the situation of Palestinian refugees, etc. ).

Lina who is active in the youth network in Palestine, took part in the People's Health Assembly:

“I was the youngest of the 1,400 participants. After my presentation of the health situation of Palestinian political prisoners, I was surprised by the number of questions asked and the solidarity. In Palestine, I was able to share my enthusiasm with my friends at university, who have become more active than before."

4 PARTNERS - REGIONS The West Bank, Jerusalem, Gaza Gaza: young people lead a campaign in their neighbourhood with "A clean water tank for clean water" as the slogan.

Since 15 June 2018, Palestinians have been demonstrating peacefully in Gaza during the Great March of Return. However, the Israeli army has responded with violence, killing dozens of people and injuring thousands. Our partner is present on the firing line to provide first aid.

What we do Training for climate coaches. Raising awareness about recycling, the rational use of water, agroecology. Introduction of crops resistant to difficult climate conditions. Cleaning beaches, rivers and coastal areas. Reforesting, with mangroves as the priority.

Following their participation in the People's Health Movement, one of our partners has become chairperson for the Middle East and North Africa region.

Result Thanks to green mapping, a participatory method aimed at improving living conditions, Centro Felix Varela succeeded in cleaning up the banks of a river with the inhabitants of La Vigia and creating a play area.

The consequences of climate change are already very visible in Cuba. With its 100year climate plan, Cuba and its population fight back. International solidarity is still important, certainly for a country whose economy is suffering because of the embargo imposed by United States.

“By working with Centro Felix Varela, I feel very useful and I learn something every day. We have to work together to tackle the ecological crisis, and at the Centro, we approach it in a concrete and succesful manner.”

In April, 25 Belgians went to Cuba for an ecology study trip with the solidarity movement Cubanismo. They also visited our partner.

What we do Campaigns and actions ( e.g about public healthcare, the right to organise, etc. ).

Result Within the framework of our campaign for public healthcare, Katharina, from the Philippines, and Aissa, from Cuba, spoke about their experiences concerning the differences in access to healthcare in their respective countries. A system with private players compared with a public system. An inspirational account which gripped young and older people, specialists and lay persons.

Climate change and a dignified reception for migrants are themes that affect and mobilise many people in Belgium. Thanks to their determination, people manage to place these themes right at the top of the political agenda. With our expertise and our partners in the South, we want to support and reinforce this movement.

Anouk person responsible during a Comac solidarity trip to Palestine :

“Our participation in the youth camp was INCREDIBLE ! We were impressed by the place and touched by the encounters. Spending 24 hours with these young people who, like us, are fighting to change society, was so enriching and intense.”

IN BELGIUM, WE WORK WITH social organisations (solidarity movements, student movements, youth organisations, health organisations, etc.), individuals and networks During ManiFiesta, our volunteers collected more than 4,000 reusable cups for Viva Salud and we were able to welcome exceptional figures such as Seun Kuti and take part in passionate debates about migration, colonisation and Palestine.

What we do Research and publications ( build a movement for health, Global Health Watch, etc. ). Training on the right to health and the construction of movements ( during the People's Health University, the People's Health Assembly, workshops and training for regional sections, etc. ). Support for logistics, administration and finance.

With Solidagro and KIYO, we organised an interesting training weekend on the theme of empowerment.

10/12: Stop the Killings action with a talk by Lengua on the fate of her husband and father, both political prisoners in the Philippines.

Result In November, 1,400 health activists from 73 different countries gathered in Bangladesh for the fourth People's Health Assembly. Viva Salud was also there, with its partners. A unique occasion to learn about each other's campaigns and the victories of social movements for the right to health.

Challenge In different countries, it is becoming more difficult to organise things because the democratic space is limited. The authorities seek different ways to hamper the work of social movements. And, at the same time, it is difficult to find the resources for networking and solidarity at an international level, which are nonetheless essential.

Quirina , a general practitioner at Doctors for the People in Hoboken, took part in the assembly :

“What I remember most about this assembly and the field visits in Bangladesh, is the great feeling of solidarity, the fighting spirit and the positive impression that we can change things, that we're all fighting for a better world, where the right to health for all will be a reality."

GLOBAL NETWORK of health activists from more than 80 countries REGIONAL SECTIONS ALL OVER THE WORLD Presentation of the fifth edition of Global Health Watch, an alternative analysis of the health situation worldwide

Launch of the Building a Movement for Health website: www.phmovement.org/ building-a-movement-for-health/

West and Central Africa PHM regional workshop in Kinshasa. A challenge to bring together participants from Gabon, Ghana, Mali and Benin, but a challenge with a successful outcome thanks to PHM and Viva Salud's partners in Congo.

contributions from other associations

addition or withdrawal from the reserves

Viva Salud is a member of :

Several examples of these small projects are our 'support the child of an activist' programme in the Philippines, and a project for solar panels for a medical centre in Gaza.

The People's Health Assembly we organised in November is the main reason our turnover increased.

We would like to thank our donors, volunteers, and supporters

Following the cuts made by the federal government, subsidies were further reduced. Nevertheless, we reached a higher expenditure rate in 2018 than in 2017, because 2017 was the first year of a new programme and we launched certain activities later in the year.

The organisation of the People's Health Assembly also generated occasional income from individuals and participating organisations as well as foundations. 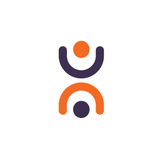