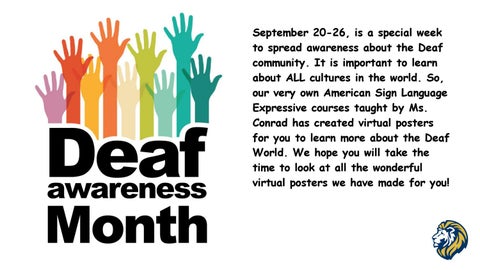 September 20-26, is a special week to spread awareness about the Deaf community. It is important to learn about ALL cultures in the world. So, our very own American Sign Language Expressive courses taught by Ms. Conrad has created virtual posters for you to learn more about the Deaf World. We hope you will take the time to look at all the wonderful virtual posters we have made for you!

Went to the Rochester Institute of Technology One of 8 deaf artist who made a manifesto for De&#39;VIA (Deaf View Image Art)

Inventor of the TTY Helped expand deaf communication abilities Worked on the Manhattan project Developed the Geiger counter to measure radioactivity to keep us safe today!

A man who helped make our world what it is today! (And kept us from getting radiation poisoning)

Deaf History: Deaf President Now -Protest held at Gallaudet University in Washington DC -March 6, 1988 - March 13, 1988 -Protest against the appointing of a hearing candidate for university president -Elizabeth Zinser (hearing) was appointed instead of the Deaf candidates, I. King Jordan and Harvey Corson -Students barricaded gates and met with press to list their 4 demands -Protests ended when the demands were met and I. King Jordan was elected president Above: I. King Jordan

How to talk to deaf people ●

If you’re trying to get the attention of the deaf person try tapping on their shoulder, or stop on the floor(like wood or something with vibration unlike concrete) or wave your hand Always face a deaf person - it&#39;s hard to read lips if you’re facing another direction Speak clearly - make sure you talk normally so they can read you lips without interference Write it down - if you’re having a hard time communicating, just write it down

Deaf people and the police For Deaf people, being pulled over or stopped by a cop is horribly slow and sometimes dangerous situation. Hardly any police oﬃcers know any sign. Police oﬃcers often resort to violence. 2 years ago a deaf man was beaten and tazed in the middle of having a diabetic episode and was put in critical condition because he could not tell the police oﬃcers he was deaf. Police need to be better equipped to deal with deaf people without using violence.

❖ There is no “universal” sign language ❖ Only 10% of Deaf people have Deaf parents ❖ ASL is the 4th most used language in the U.S.

“Matt Daigle is a deaf cartoonist, designer and illustrator who lives in California. He and his wife produce a hilarious comic strip called That Deaf Guy, about a deaf man who, like Matt, has a hearing wife and son.” -Charlie Swinbourne

In an interview Daigle explains that a difficult part of making his comics is breaching the gap between two worlds. He says “If the humor is too deaf, hearing people will not understand it and vice versa!”

This video includes a group of deaf astronauts and It quickly goes over some of the experiments they were involved in. In addition, it shows a bit of their training for zero gravity!

Beware of the frauds!! If you ever need to get an interpreter for anything you should make sure they have a proper certificate to sign and they actually know what they are doing. People like this are doing something very illegal that could have caused a lot of problems or just make a fool out of such a good event. Also, ITâ&amp;#x20AC;&amp;#x2122;S ILLEGAL!!!!

Signing Starbucks The Starbucks store has staff members that are all fluent in ASL. The store is in Wash. DC. Shows that deaf people can make a workplace more deaf-friendly and have more variety.

How to make Deaf friends... ● Learn American sign language to better communicate with them! ● Tap them to get their attention! ● Ask about their personal experiences in the Deaf community!

Deaf People They Exist Respect them

Fun Facts ★ Gallaudet got its first deaf president in 1988, 126 years after its creation ★ Marlee Matlin has been in 61 movies and shows, and has guest starred as herself on 116 ★ Segregation led to the development of two main dialects of ASL ★ The first totally deaf modern politician was MP Jack Ashley, who campaigned for disabled people his whole career

Discovered the “standard candle” method, which revolutionized the ability to measure the distance of distant stars and galaxies

known as the father of deaf education in Africa

● ﬁrst Deaf African American to earn a bachelor&#39;s degree from Gallaudet University ● missionary to the deaf in Ghana, Rwanda and other countries in Africa ● establish 32 schools for the deaf in 13 African nations.

American School for the Deaf

Shoshannah Stern is a deaf actress She played Eileen Leahy on the popular show- Supernatural and stars in This Close Another show you may recognize her from is Grey’s Anatomy where she plays the ﬁrst deaf doctor in the show, inspiring many She is a big supporter of All You Need is Love and DeafHope

An artist who does paintings sculptors and some mixed media Born deaf, went to hearing schools Art works in aquatic landscapes, semi-abstract, isolated ﬁgures Isolation in her art reﬂects her isolation from other deaf people

How to talk to deaf people When talking to a deaf person dont over enunciate when trying to talk, that makes it harder for them to lip read

When trying to get a deaf person&#39;s attention yelling at them is not going to work, Try and get in front of them so they can see you or nicely tap them on the shoulder.

If you don&#39;t know ASL you can alway type something out or write it Make sure you are talking normal just a little slower so the person you are communicating with can understand

BeethovensNightmare “The Greatest Deaf Rock Band in the World.” Yes, Deaf people ‘listen’ to music. In fact, there are many all Deaf bands! Ed Chevy, Bob Hiltermann and Steve Longo makeup Beethoven’s Nightmare, an all deaf rock band-- often coined as the “Greatest Deaf Rock Band in the World”. The inspiration for their name came from Ludwig Von Beethoven, who became deaf at the age of 35. However, becoming deaf didn’t stop Beethoven, or Ed, Bob, and Steve, from pursuing their passion for music. The band started in 2007 but the members have been playing rock for over 40 years! The band’s concerts are filled with lights, loud speakers, and interpreters for both hearing and deaf people to enjoy the music.

Always face a deaf person, make eye contact and keep it. Repeat and re-phase if necessary Write it down Check noise and lighting. Turn off background noise

What to do when meeting a deaf person Always make sure you have the person&#39;s attention, a simple wave Not everyone can sign some people may have hearing aids or lip read Eye contact and facial expressions are important when communicating Avoid emphasizing mouth movements and shouting. Try knowing the ABCâ&amp;#x20AC;&amp;#x2122;s in ASL BE PATIENT AND KIND TO EVERYBODY! Villasenor 3 period

How to Communicate with a deaf person ●

Using a pen and paper to write what you would say.

The deaf person could read your lips. (though this hard and not eﬃcient for communication)

ASL is the fourth most used language in the US.

1 in 5 american teenagers have some type of hearing loss.

If you don’t understand...there’s a problem. Learn American Sign Language so the next time you’re told this.

Many deaf people have horror stories from their interactions with the police. Theyâ&amp;#x20AC;&amp;#x2122;ve experienced police violence, wrongful arrests, and discrimination countless times.

POLICE BRUTALITY AND THE DEAF COMMUNITY

Deaf people are urging police oďŹ&amp;#x192;cers to learn basic signs to help ease the interaction between them and the police. Deaf people are tired of being afraid for their lives every time they get stopped. They hope to be treated with patience and respect just like everyone else.

Did you know... Different countries have their own sign language? America has ASL, the UK uses BLS, Australia uses Auslan, and there are many more. ASL is the fourth most used language in America. 3 out of every 1,000 newborns are born deaf. 9 out of 10 children who are born deaf are born to hearing parents.

Deafness is the number one birth defect in the U.S.

2 to 3 out of 1,000 children in the United States are born with hearing loss in one or both ears

Genes are responsible for 50% of hearing loss in children

If a Deaf child swears does his mother wash his hands with soap and water?

ASL is the 6th most used language in the U.S

What to keep in mind when interacting with a Deaf person (Yes, you can say Deaf… It’s not a bad word!) Try to not use the terms, “hearing impaired” or “disabled”. The terms “deaf” and “hard of hearing” are more acceptable

Always face the person when you’re communicating, and try to maintain eye contact

When trying to get a Deaf person’s attention, just lightly tap them on the shoulder or give them a friendly wave

Many people who are Deaf use lipreading to keep up with conversations, if you’re not using ASL. Speak clearly and UNexaggerated. Lipreading is hard! Be patient and considerate.

If you’re not familiar with ASL, feel free to write something down on a piece of paper, or on your device

Irving King Jordan was born in 1943 in Glen Riddle Pennsylvania. He became deaf when he was 21 when he was in a tragic motorcycle accident doctors originally told him that his hearing loss would be temporary. He didn&#39;t get his hearing back he of several months he deciding to move on with his new life as a deaf person. In 1988 he became the first deaf president at Gallaudet University. He did not get selected he got beat out by a hearing women named Elizabeth Zinser The student at Gallaudet University where not happy so they went on a week long protest that was called “Deaf President Now”. Today I. King Jordan is still alive at age 76.