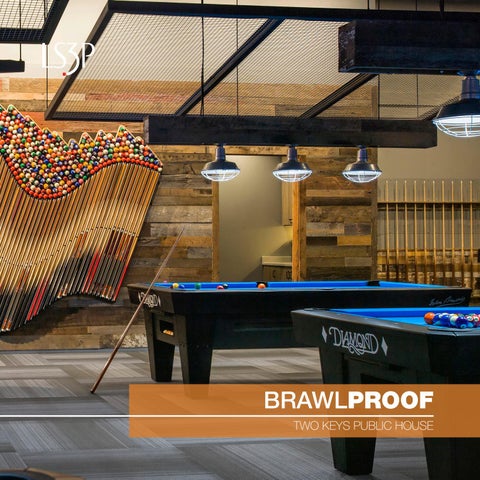 PERFECT PLACE TO GET A LITTLE ROWDY.

A good barroom brawl is the stuff of legend, whether it’s captured in song or on film. Consider the lyric “And then a hush fell over the pool room,” just before an epic showdown between a New York pool hustler and the country boy who comes to get his money back in “You Don’t Mess Around with Jim.” Or, reflect for a moment upon the wistful Crash Davis in “Bull Durham,” half apologizing for spectacularly shattering the pool hall mirror with a ball, saying only “I have been known to howl at the moon…”

“Things did not initially look promising for this project.” That’s what Mark Keller, owner of Two Keys Public House, conveyed to LS3P when he asked the project team to design a space for his newest establishment. His previous pool hall, he explained, was the kind of place where patrons regularly put fists through the rest room walls, and the finishes and furniture took the brunt of any “gentlemanly disagreements” which occasionally occur at the intersection of competition and alcohol. Aside from the need for a design that would be “durable to the extreme,” the space in question

was the former home of a kids’ gymnasium with a weirdly high ceiling and awkward layout. The schedule was tight, and the budget was even tighter. However, as da Vinci eloquently stated, “Art lives from constraints and dies from freedom.” The tight budget and the need for a solution that could stand up to anything led to some inspired design decisions- a process which started with scouting trip to local big-box hardware stores and antique shops to canvas for materials.

Creating an upscale space with a raw but comfortable industrial aesthetic became the overarching design goal. Pre-distressed materials, the team reasoned, would only improve with ongoing “engagement” with the pool players. Inexpensive reclaimed barn wood, worn antique and salvaged materials, exposed structural steel, and stained concrete were all installed in their natural states with their various textures and patinas as intentional design elements. The design brought down the high ceilings over the pool area by creating custom mesh “clouds” which define the space and impart a more human scale. In other areas, caged industrial lighting hangs from beams which were installed to moderate the scale and frame the space.

The design of the pool area itself came with a list of additional constraints: rules- in fact, strict regulations- for competitive league play. The required blue felt of the pool tables provides the main color within the establishment, which is complemented by the black painted pool tables, scoring tables made of I-beams wrapped with a warmer wooden edge, and walnut butcher-block side tables in the billiards area.

The program wasn’t all pool tables. The 6,000 SF footprint included a dart zone, dance floor, dining area, storage, DJ booth, and a full-service bar and restaurant. The need for C a kitchen was a surprise to all; when an adjacent tenant decided not to give up his lease, the owner discovered mid-project that he’d have to build his own. Undaunted, the team hired a kitchen consultant, and pressed on.

VINYL GRAPHIC ON WALL BEYOND

Things started to come together. The bar became a centerpiece of the design; salvaged doors turned horizontally and installed as-is fit the aesthetic perfectly. The doorknobs, plus a few extras rounded up from an antique store, became purse holders. Huge hinged doors cladded with reclaimed barn wood hid vast amounts of much needed storage, but looked like a solid wall of wood when closed. The stained concrete floors lent an industrial vibe. The textile composite flooring was another great find. The owner was given a sample with instructions to try and destroy it. He took it into his existing commercial restaurantâ&#x20AC;&#x2122;s kitchen and did his best. The product representative came down to check it out. The face of the sample appeared completely destroyed; nonetheless, he was able to clean it easily to bring it back to its original luster. This virtually indestructible flooring found a home under the eight regulation pool tables.

Who would have thought this bulletproof solution could be so deliciously creative? Spot on to achieve the project brief’s goals, concept and desires.

As for the restrooms, which the owner warned would be vulnerable to swinging fists: the team specified a sturdy plywood underlay, half-inch decorative tile, and studs spaced so close together as to frustrate all attempts at hole-punching.

The owner wanted to create a sense of place for his newest location, and requested an iconic mural of the Charleston peninsula. This piece, rendered as a continuous panorama from one side of the peninsula to the other, resides atop the soffit in front of the bar in billboard style, and is lit at intervals with 1930’s industrial goose arm lighting. A huge 10’ x 10’ portrait inspired by the owner’s grandfather is the focal point of the dance floor. Summerville, SC where the hall is located, is a football kind of town, and the owner’s grandfather was indeed a star high school football player. The portrait of this 1930’s player especially works with the sports-bar atmosphere which is underlined by the row of plasma screens running four high and eight deep.

When Two Keys Public House opened in February, the Mayor of Summerville came to cut the ribbon, and the place became an instant success. The owner made more money

on his second day of operation than on any other single day at his previous locations. Though the project looked rough at the outset, the transformation from gymnasium to Public House was driven by a spirit of creativity, innovation, and, yes- fun. On the opening day, the owner gave the design team sterling flasks engraved with the name and opening date as a thank-you present, and everyone parted fast friends. A good barroom brawl is the stuff of legend, whether it’s captured in song or on film. Consider the lyric “And then a hush fell over the poo...

A good barroom brawl is the stuff of legend, whether it’s captured in song or on film. Consider the lyric “And then a hush fell over the poo...