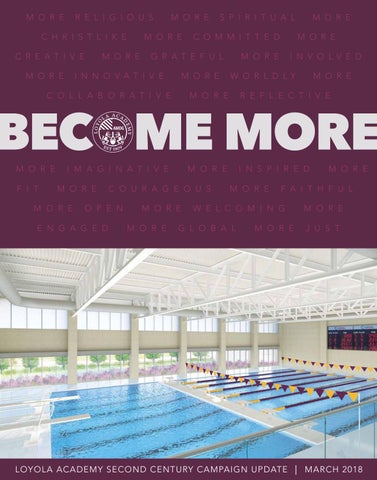 THE NEXT STEP IN REALIZING THE VISION

FTER YEARS OF PLANNING and fundraising, construction is about to begin on a multiphase Campus Master Plan that will transform our Wilmette campus with a state-ofthe-art pool; a light-filled, multifunction gathering space inspired by the St. Ignatius Piazza in front of the Church of St. Ignatius in Rome; a theater for the performing arts; and more.

OUR MULTIPHASE Campus Master Plan marks the next step in transforming our vision of a worldclass, Jesuit faith and education center into a reality. This master plan, which will be implemented in two to three construction phases over the next five to seven years, includes three large-scale capital enhancements— a pool, a piazza and a theater for the performing arts—as well as smaller projects such as classrooms, administrative offices and specialty spaces.

A bold vision to become more Our path to becoming more for Loyola’s Ramblers began in 2012, when our Board of Trustees approved Our Second Century of Excellence: A Strategic Vision for Loyola Academy in the 21st Century. This bold vision was conceived to guide us in every aspect of our mission as we reimagined Loyola Academy as a vibrant faith and education center for our 21st-century world.

Pool ARCHITECTS ARE putting the finishing touches on plans for an eight-lane, IHSA-approved, competition-size pool that will enhance the Phase One enhancements include a new aquatic center (exterior shown above, right in photo) and aquatic experience of every Rambler—from the a glass-fronted piazza ( located between the pool and the West Gym), as well as general campus nonswimmer in need of basic water safety and improvements such as redesigned pedestrian crossings for student safety, rerouted drop-off and swimming instruction to the varsity swimmer. pickup lanes for improved traffic management, new and expanded parking lots, more effective stormwater detention systems, new exterior lighting, a new directional sign system and enhanced The new pool will be housed in a bright and airy landscape borders and buffers. two-story natatorium with advanced mechanical systems designed to ensure optimal indoor air quality, a suite of locker rooms with separate team and physical education locker areas, a coaches’ office, a wet classroom adjacent to the pool area and a 294-seat spectator gallery with retractable bleachers.

Piazza THE PHRASE “Meet me at the piazza” will one day be a familiar one at Loyola Academy, when members of our school community begin to use this gathering space between the pool and the West Gym for everything from informal gatherings to art exhibits, classes, concerts and other events. Inspired by the St. Ignatius Piazza in front of the Church of St. Ignatius in Rome—a place where ideas, the arts and the Church’s faith traditions have all flourished in community since 1728—our new piazza will set the stage for a renaissance in arts programming that will culminate in the Phase Two design and construction of our new theater for the performing arts. Piazza Sant’Ignazio in Rome

A road map for transformation In 2017, we began the process of transforming the large-scale capital enhancements outlined in our strategic vision into exciting realities. We hired The Lakota Group, an award-winning urban planning firm; formed a Campus Master Planning Committee chaired by Peter J. Broccolo ’74; and began a campus master planning process that included a study of campus facilities and

management team from Ascent will be coordinating our construction schedule and looking for best values at every turn as we improve our facilities to create an ideal environment for shaping the hearts, minds and spirits of Ramblers in the 21st century.

collaborative engagement with our neighbors, the Village of

In May, site preparations will commence for our Phase One

Wilmette and members of the Loyola community. In February 2017,

capital enhancement projects, which include an eight-lane

the Board of Trustees approved a Campus Master Plan that will

ground in phases for our new pool and piazza, theater and other

Laying the groundwork for a 2018 groundbreaking

As our new pool makes the transition from vision to reality,

we will also be building the piazza, expanding our on-campus parking, rerouting our drop-off and pickup lanes to improve

As our Spring 2018 groundbreaking approaches, preparations for

traffic flow and reduce congestion on side streets, installing

Phase One of our Campus Master Plan are accelerating. Architects

from CannonDesign have benchmarked the best examples of

beautifying our campus with landscape borders and buffers.

These Phase One enhancements, which total $19.1 million,

best fits the needs of our school community. Valenti Builders has

have an estimated completion date of August 2019. Watch for

created a construction logistics and phasing plan that puts safety

more news about our construction progress at goramblers.org/

first and minimizes the impact of construction on school and student

secondcenturycampaign and in future issues of our Second

activities, parking and traffic flow. Throughout Phase One, a project

Theater for the Performing Arts FOR NEARLY FIVE CENTURIES, the Jesuits have understood that the arts play an important role in the enrichment of the human spirit and the development of creative thinkers with the potential to transform society in positive ways. By generating support for a 600-seat theater for the performing arts, our Second Century Campaign Theater Initiative will give Ramblers of all artistic abilities a place where they can engage in creative expression and exploration; learn transferable skills such as a willingness to look at problems from different perspectives and the confidence to think outside the box; and develop their talents as they explore the world’s diverse cultures, the beauty of nature and the presence of God in all things through the performing arts.

FROM VISION TO REALITY

2012 Loyola Academy President Rev. Patrick E. McGrath, SJ, announces his Strategic Vision for Loyola Academy in the 21st Century. 2013 Fr. McGrath and the Board of Trustees identify six fundraising priorities for the Second Century Campaign, including a tuition assistance endowment, new science labs and technologies, professional and spiritual development opportunities for Loyola faculty and staff, an operating reserve, a new pool and a new theater for the performing arts. 2016 Loyola reaches a turning point in its fundraising efforts, thanks to the collective generosity of the visionary benefactors who made major gifts during the quiet phase of the Second Century Campaign and a multimillion-dollar gift from the estate of John D. Norcross ’54. 2017 Loyola’s Board of

2018 Construction is slated to begin on a new pool and a gathering space inspired by the St. Ignatius Piazza in Rome, as well as other Campus Master Plan Phase One capital enhancement projects. In Summer 2018, construction on our seventh science lab will also commence, marking the successful completion of our Science Lab Initiative.

to begin on Phase Two capital enhancements, including a new theater for the performing arts.

A Final Gift and a Lasting Legacy

EHIND EVERY STORY of Rambler triumph and transformation, there is another story about the Loyola community members who help make that transformation possible. This is the story of one of those community members: John D. Norcross ’54 (RIP)—a man of great faith and devotion to the Catholic Church who believed deeply in the transformative power of a Jesuit education at Loyola Academy. During his lifetime, John generously supported the development of our Munz Campus in Glenview, the Robert P. Perkaus III ’77 Memorial Scholarship Endowment and our Annual Giving Program. A member of the Loyola Academy swimming and diving and water polo teams during his Rambler days, this former aquatic athlete was also one of the first benefactors to invest in our Second Century Campaign Pool Initiative. “John gave back to Loyola Academy every year of his professional life—and he visited our Wilmette campus often to celebrate and support our Rambler athletes and our Jesuit educational mission,” recalls Loyola Academy Principal Gifts Officer Les Seitzinger ’88. “He had a genuine love for Loyola and a genuine

University. During appreciation his Rambler for those who years, John had were working formed some together to lasting friendships enhance the lives with Loyola of our students. classmates. One Whenever of those friends he attended was Michael E. a football or Crane ’54, who basketball later became game, or our John D. Norcross ’54 John’s business annual seasonduring his senior year at partner when the kickoff football Dumbach Hall two Loyola alumni luncheon, he founded Crane would say to us, and Norcross, a Chicago-based ‘Thanks for all that you do for firm specializing in property our students.’” tax law. After attending Loyola After John passed away Academy at Dumbach Hall on in November 2014, Loyola Loyola University’s lakefront received word that this loyal campus, John majored alumnus had engaged in a final in economics at Stanford act of generosity by leaving a University and then earned his multimillion-dollar estate gift to law degree at Northwestern

Loyola Academy in his will. “We are humbled by the trust that John Norcross has placed in us with this extraordinary gift, which is the largest philanthropic commitment in the history of Loyola Academy,” says Loyola Academy President Rev. Patrick E. McGrath, SJ. “To honor John’s love of Loyola aquatics and his passion for the performing arts, which he supported throughout his life, his gift will be used to help fund our Pool and Theater Initiatives. John’s legacy will live on at Loyola Academy as his generosity revitalizes our Wilmette campus and brings new opportunities for faith, scholarship, service and leadership to 2,000 young people each year.” 4

We are humbled by the trust that John Norcross has placed in us with this extraordinary gift, which is the largest philanthropic commitment in the history

John Norcross (top row, third from right) with the other members of Loyola Academy’s 1953–54 Senior Swimming and Diving Team

ACH YEAR, members of the Loyola community make gifts of all sizes to transform the dream of a Jesuit, college preparatory education into a reality for young people from families of all income levels. Loyola Academy would not be the center for faith and learning that it is today without the collective impact of their support. Every so often, a benefactor engages in an act of generosity that is truly transformative. We are immensely grateful to the loyal benefactors listed at right for their single leadership gifts or pledges of $1 million or more during the quiet phase of the Second Century Campaign.

In 2012, an anonymous donor made an unrestricted gift, which was invested in our Second Century Reserve Fund, an operating reserve that gives us the liquidity and flexibility we need to take advantage of strategic opportunities as they arise, while ensuring Loyola’s long-term financial stability. In 2014, Mr. and Mrs. Peter G. Leemputte ’75 made a leadership gift to support the development of a new theater for the performing arts.

In 2014, Mr. and Mrs. F. Quinn Stepan Sr. ’55 made a leadership gift to support our Ignatian Educator Initiative. The Stepans’ gift was used to fund Loyola Academy’s Canisius Program, which fosters the development of Ignatian faculty leaders. In 2016, Loyola Academy received the largest gift in Loyola’s history from the estate of Mr. John D. Norcross ’54. This multimillion-dollar gift will be used to support the