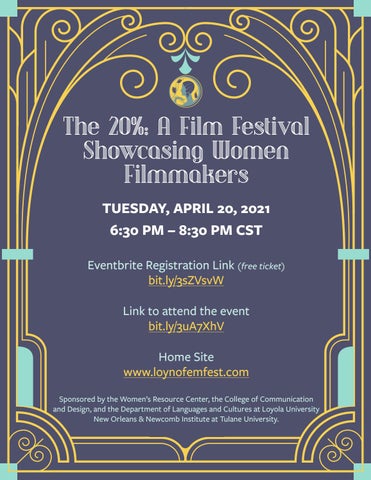 Program Description ““The 20%: A Film Festival Showcasing Women Filmmakers’’ is an event designed to celebrate women filmmakers from all over the world. Each year, Loyola University New Orleans’s Women’s Resource Center hosts a Feminist Festival in the last weeks of March, and the film festival is included in the annual festivities. As with previous festivals, the Women’s Resource Center has partnered with the College of Communication and Design and the Department of Languages and Cultures at Loyola University New Orleans as well as with Newcomb Institute at Tulane University. For the first time, we have been able to work with the Tournées film festival, hosted by the Loyola French Club, the French section of the Department of Languages and Cultures, and the Center for International Education to screen six feminist, full-length French films over the span of six weeks to culminate into the short films featured in “The 20%” event. Students from Loyola participated as jurors to review the films to decide the winners of the Jury Prize and Best Student Film award and to create a final program. Due to COVID-19, we decided to push the festival to late April and to create a fully remote event. In this festival, you will see a variety of films made by women in any position in the filmmaking crew, such as the director, writer, cinematographer, etc. Please see the list of films featured below with their log-lines and directors. Audience members will have a chance to vote on their favorite film after they have watched all of the films. The winner of the audience prize will be announced to everyone who attended the remote event.

The views and opinions expressed in this program are those of the filmmakers and do not necessarily reflect the official policy or position of the hosts or sponsors.

Following strong matrilineal traditions of the Native American culture, women on the Pine Ridge Native American Reservation in South Dakota are working to create “a girl society” that will help girls aged 10 to 18 be more resilient and see a brighter future.”

14-year-old Njillan, one of the top students in her class, has just been awarded a government scholarship to pursue her secondary education. Excited to share this achievement withher family, she is welcomed with bad news. Her father has given her away in marriage to Sengan, despite the protests from her mother.

Blanca’s reunion with her friend from college will make her relive the best decision of her life: to be who she really wants to be. Trigger warning: transphobia, violence and sexual assault.

Tooru works for an underworld organization to raise money for his mother’s medical expenses. One day, his boss, to whom Tooru feels indebted, orders him to kill a senior colleague who made a mistake.

While social distancing during a pandemic, Jakayla reluctantly embraces her ill sister’s request to create a list of ways to find joy during sorrow. 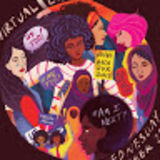