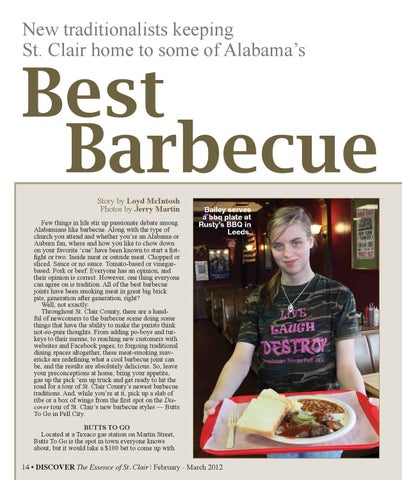 New traditionalists keeping St. Clair home to some of Alabama’s

Best Barbecue Story by Loyd McIntosh Photos by Jerry Martin Few things in life stir up passionate debate among Alabamians like barbecue. Along with the type of church you attend and whether you’re an Alabama or Auburn fan, where and how you like to chow down on your favorite ‘cue’ have been known to start a fistfight or two. Inside meat or outside meat. Chopped or sliced. Sauce or no sauce. Tomato-based or vinegarbased. Pork or beef. Everyone has an opinion, and their opinion is correct. However, one thing everyone can agree on is tradition. All of the best barbecue joints have been smoking meat in great big brick pits, generation after generation, right? Well, not exactly. Throughout St. Clair County, there are a handful of newcomers to the barbecue scene doing some things that have the ability to make the purists think not-so-pure thoughts. From adding po-boys and turkeys to their menus, to reaching new customers with websites and Facebook pages, to forgoing traditional dining spaces altogether, these meat-smoking mavericks are redefining what a cool barbecue joint can be, and the results are absolutely delicious. So, leave your preconceptions at home, bring your appetite, gas up the pick ‘em up truck and get ready to hit the road for a tour of St. Clair County’s newest barbecue traditions. And, while you’re at it, pick up a slab of ribs or a box of wings from the first spot on the Discover tour of St. Clair’s new barbecue styles — Butts To Go in Pell City.

Bailey serves a bbq plate at Rusty’s BBQ in Leeds.

Butts To Go Located at a Texaco gas station on Martin Street, Butts To Go is the spot in town everyone knows about, but it would take a $100 bet to come up with

Best Barbecue the joint’s name. Most people in town just know it as the gas station with the darn good barbecue. There is no flashing neon signs with the words Butts To Go anywhere on the building, but who needs a lighted smiling pig 20 feet in the air when you have four black smokers cooking up Boston Butts and ribs all day long? The fragrant smoke billowing up and down the highway are all the marketing this place needs. “On pretty days when that smoke just sits across the road, business is better, there’s no question about it. People come in and say, ‘Man, that smoke is killing me, I got to have something to eat,’” says owner Wade Reich. Reich, along with a couple of partners, bought the gas station in 2008, after he moved back to the Birmingham area in 2002. With no experience whatsoever, Reich started thinking about getting into the barbecue business after the Pell City Food World closed back in 2009. For years, Food World set up a bank of smokers and cooked up butts, ribs and other treats for local barbecue addicts. When the supermarket closed its doors for good almost three years ago, Reich saw a void that needed to be filled. “When they went out and closed that store, nobody around here picked up doing Boston Butts. I said, ‘Well, there’s got to be an opportunity’ because people are used to driving up and down here buying Boston Butts for the holidays. So we started doing it,” Reich says. Originally, he only smoked Butts on barbecuefriendly holidays such as Memorial Day, Fourth of July and Labor Day, but the response was so positive that he almost immediately found himself literally up to his armpits in hickory smoke and hungry customers. “Pretty soon we got to where we were cooking every weekend and then people would come in and ask, ‘Don’t you have any sandwiches?’ So we started doing sandwiches,” he said. Butts To Go uses three smokers, all sitting right next to the road, cooking butts and ribs using a cooking technique called the Texas crutch method. “I didn’t know that when we first started,” admits Reich. The butts are smoked for a couple of hours then wrapped in foil and finished on indirect heat with the fire built on one side and the meat cooking low and slow on the other side. The grills are locked down overnight and the butts are pulled off in the morning, then the ribs go on and are cooked throughout the day. Aside form hickory wood used for the fire, Reich uses no additional flavorings — no rubs, brines or marinades — which Reich claims is what separates Butts To Go from other barbecue joints. “Our flavor is in the meat, which is different from most other places. Most other places push their barbecue sauce and our barbecue sauce is a non-descript, middle-of-the-road, tomato-based, not sweet, not vinegar sauce,” he says. “Our success has been with the meat itself, which is differ-

James Grigsby prepares the smoker to begin cooking a new batch of BBQ.

ent than the way everyone else does it.” Of course, the fact that Butts To Go is inside a gas station sets it apart as well. Even if you can buy a Full Throttle energy drink, a quart of oil and a pack of No Doz along with a pork butt sandwich or a dozen wings, Butts To Go has developed a loyal following among hard-working, blue-collar guys to busy moms. It may be a wee bit unconventional, but Butts To Go is that cool little place that gets people talking. “There are people who come in here and get 10 sandwiches. Construction crews will come in early in the morning and pick up a bunch of sandwiches to take with them,” he says. “We also cater to people who are hauling kids to baseball practice or whatever and don’t have time to cook tonight. That’s really what we do.” “There’s something about barbecue places, and I’ll admit I don’t know what it is. Everybody has their favorite barbecue place, and they tend to seek them out,” Reich adds. “They like to discover their barbecue

place, and it’s almost like it belongs to them personally.” With bellies, and gas tanks, full, it’s time to head out to spot number two on this barbecue tour — Rusty’s BBQ in Leeds. Rusty’s Barbecue Located in an old Jack’s Hamburgers building on Highway 78, Rusty’s is the more conventional of the new places on this tour. It’s also smack in the middle of a mini-barbecue renaissance in Leeds, surrounded by new joints with names like Huck’s Rib Shack and Old Smokey Barbecue. One of Rusty’s primary advantages is an actual website with an actual menu online. Finding a website for an independent barbecue joint — even this far into the 21st Century — is about as easy as finding tofu smoking away on the brick pit. In plain and simple terms, it ain’t easy at all. Jonathan “Rusty” Tucker opened his namesake joint

Best Barbecue in February 2009, practically while the ink was still wet on his diploma from the Johnson &amp; Wales culinary institute. By his early twenties, Tucker had already earned his epicurean stripes working at fine-dining restaurants such as Satterfield’s in Birmingham and The Charleston Grill in Charleston, S.C. Before he knew what hit him, he was renting the space near downtown Leeds at an age most are just entering the workforce. “I’ve always wanted to open a restaurant if the opportunity presented itself. I didn’t think the opportunity would present itself at the age of 24,” admits Tucker. Having experience in fine dining, Tucker soon discovered his true calling after accepting a catering job one summer while home from college. The client wanted barbecue and, like any self-respecting young person eager to get his foot in the door – he bluffed his way into it. “I said, ‘Sure I can do barbecue.’ I went out to the lake, set up a grill and got there really early in the morning and cooked barbecue all day long,” says Tucker. “At the end of the day, I’d had a great day and a pocket full of cash and by the time it was all said and done, I was driving home thinking, ‘Man, I would have done that for free.’ ” At first glance, Rusty’s may look like many good barbecue joints, but after a few minutes you realize this place really is different. While there are a few pieces of Alabama and Auburn memorabilia scattered about – including an autographed photo of Tucker and Leeds native Charles Barkley – Rusty’s reflects its owner’s personality. The walls are adorned with a handful of old guitars, some pieces of baseball memorabilia, and dozens of posters of rock bands, including a huge portrait of famed blues guitarist Stevie Ray Vaughn, all of which came straight from Tucker’s childhood home. “Basically my parents said, ‘Come get this stuff out,’ and I said, ‘I got the perfect spot for it. I’ll open up a restaurant.’ ” The food at Rusty’s is the main attraction, and in just under three years, Tucker has gained a loyal and growing customer base. Visitors to Rusty’s will find the basics here, pulled pork butts, chicken, and hamburgers cooked to order. You won’t find brisket on the menu though. “This is Alabama,” he says. “We’re a pork house.” However, the menu item Tucker says he’s most proud of is the ribs. Tucker trims down spare ribs to a St. Louis cut and trims the skin off the back in order to make them more tender. They go on the brick pit in the back of the building and come out tender and juicy with just the right amount of give on the bone. No frills, the way Rusty believes barbecue should be done. “Honestly, I’m not reinventing the wheel. I’m not doing gourmet barbecue, I’m doing (darn) good barbecue,” Tucker says. While he may downplay his skills and adventurousness, Tucker is not afraid to try new things. For instance, smoked turkey is a regular item on the menu, and he offers diners four barbecue sauce choices: a vinegar-based sauce, a sweet sauce, spicy and a white sauce. Regardless of what cut of meat is smoking away on the pit, Tucker believes really good barbecue is a result of a personal connection of a cook, his food and his customers. “I think a lot of people have lost touch with real barbecue. Everyone’s got these big, $30,000 gas-fired smokers that you put one or two logs of whatever wood you want on it, load it up with 1,000 pounds of meat and set it and forget it. That’s not what we’re doing,” Tucker says. “We’ve got a brick pit that we’ve got real hickory wood burning underneath, and we move things on and off the flame to get the right color and char. It’s

Jennifer Jowers prepares a BBQ sandwich at Butts to Go.

Robert Reich checks the smoking meat at Butts to Go. more of an art than a science. I think we spend a little more time and love than some of these big chains.” Next up on the tour, The Shack Burgers and Barbecue in Springville. The Shack Located on Marietta Road just off U.S. Highway 11 and Alabama 174 is a little restaurant in Springville called The Shack Burgers and Barbecue. In fact, the place is so small you might 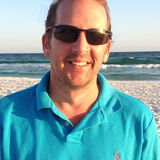