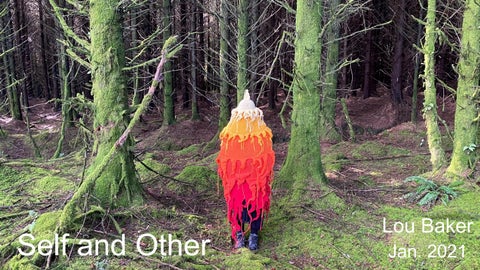 Baker, L., (2019) Red is the colour of…, knitting performance and installation, at ‘B-Wing’, Shepton Mallet Prison

This time last year, at the beginning of my MA, I was exploring knitting as a research method.

Now, I’m researching ways to synthesise the three strands of my practice - sculpture, performance and social engagement. It’s as if I’m ‘knitting together’ the key aspects of my research, even when there’s no knitting involved.

‘I paint myself … because I’m the subject I know best.’ (Frida Kahlo)

My Self is central to my practice, my physical body, but also my inner self.

My work embodies ideas, giving them a physical form, making them visible. Artist Nathaniel Stern describes embodiment as ‘moving-thinking-feeling’…He talks about ‘the feedback loops between sensation, experience, movement, and understanding.’ This, I feel, describes my practice well.

Iâ&amp;#x20AC;&amp;#x2122;m a sculptor and my making is increasingly performative. Traces of the form and force of my body are evident in my work.

I favour labour intensive, repetitive and transformative processes as they often lead to a deep and different way of thinking; Csikzsentmihalyiâ&amp;#x20AC;&amp;#x2122;s flow, that meditative state where time flies.

Life sized, working drawing of my outline in several poses from stills of my Body cocoon performances Four of my metal body sculptures

Iâ&amp;#x20AC;&amp;#x2122;ve recently started synthesising two different kinds of performance into my sculptures. I use the poses from my videoed performances and draw them with steel as performative making. - measuring, cutting, bending, clamping, welding.

‘The binary of self and other is perhaps one of the most basic theories of human consciousness and identity… the existence of an other, a not-self, allows the possibility or recognition of a self.’ (Sami Schalk, 2011)

Although my work appears to be ‘all about me’, I’m most interested in my self in relation to the ‘Other’, in the similarities and differences between us and in making connections. Gender studies scholar, Sami Schalk, maintains that ‘the existence of an ‘other’, a not-self, allows the possibility or recognition of a self.’

Self and Other â&amp;#x20AC;&amp;#x2DC;The presence of what is not me renders my identity precarious and vulnerable, and the threat that the other represents transforms my own sense of self into something questionable.â&amp;#x20AC;&amp;#x2122; (Claire Bishop, 2004)

Alyson Minckley wearing Body cocoon 2, with one Part of me, Sept 2020

However, Claire Bishop says ‘The presence of what is not me renders my identity precarious … the threat that the other represents transforms my own sense of self into something questionable.’ My work explores this space between us, both physically and metaphorically. And, of course, there is a dark side.

Carl Jung describes individuation as a process which needs to occur in the second half of life. Itâ&amp;#x20AC;&amp;#x2122;s about finding meaning in life and is ultimately a preparation for death. He talks about balancing our multiple selves with the dark side, or shadow, of ourselves and maintains that failure to acknowledge and accept this shadow can result in fragmentation and associated mental health issues.

The uncanny (Freud) and the abject (Kristeva) ‘Death is the ultimate in abjection.’ (Julia Kristeva) Lou Baker, Part of me 3, Sept. 2020

Freud suggests that humans have a basic urge to avoid death, to be immortal, which makes us attempt to replicate ourselves. He claims, however, that often the double we have so carefully created, â&amp;#x20AC;&amp;#x2DC;reverses its aspect. From having been an assurance of immortality, it becomes the uncanny harbinger of death.â&amp;#x20AC;&amp;#x2122; He describes the uncanny as something familiar and yet not quite as it seems. There are clear links between the uncanny and the abject, as both blur boundaries between Self and Other. Kristeva suggests that death is the ultimate in abjection.

‘(F)abrication throughout (Mary Shelley’s Frankenstein) is the making of an Imaginary Self, an ‘other one’’ (Hogle, 1980)

Mary Shelley’s story of Doctor Frankenstein, who attempts to create a living being, resonates strongly with my work – the obsession, the joining of parts, the labour and time spent, and, finally, the ‘othering’ of the created by the creator. My sculptures are uncanny, abject in many ways yet also vulnerable and strangely alluring. I call them my Frankenstein’s monsters.

‘Mary Shelley… gave voice to the voiceless and presence to the invisible … Sometimes to talk about monsters, we need to fabricate monsters of our own, and parables do that for us.’ (del Toro in Hewitt, 2018)

Guillamo del Toro, director of the film The Shape of Water, thanked Mary Shelley, saying that she ‘gave voice to the voiceless and presence to the invisible… Sometimes to talk about monsters, we need to fabricate monsters of our own, and parables do that for us.’

Parts of me, Sept. 2020 Knitting, steel, Jesmonite, plaster, my shoes

Annette Messager deals in multiples too, referencing multiple identities. She says: ‘I work by accumulation to hide myself’. Her works ‘incorporate … the representation of bodies, often fragmented.’

She also makes large scale, immersive installations, often including parts, some of which are made by her, and some which are everyday, found objects. She assembles them in unexpected ways so that â&amp;#x20AC;&amp;#x2DC;the work oscillates between lightness and gravity.â&amp;#x20AC;&amp;#x2122;

I see many similarities between her work and mine- the multiples, the methods of installation, the abstract body parts but, most of all, the use of ambivalence to provoke conflicting responses.

There are also clear connections between Nick Cave’s Soundsuits and my Body cocoons. His wearable sculptures investigate identity, explicitly in terms of gender, race and cultural heritage. He says ‘inside a suit, you couldn’t tell if I was a woman or man; if I was black, red, green or orange; from Haiti or South Africa. I was no longer Nick. I was a shaman of sorts.’

My Body cocoons explore identity as well, but in a more personal way. Worn, by me, they take on my form and explore the boundaries between Self and Other, private and public. Thereâ&amp;#x20AC;&amp;#x2122;s also something shamanistic about them, especially when situated in unexpected places.

There are elements of apparition in my work, suggesting fantasy and ritual, dreams or nightmares. Iâ&amp;#x20AC;&amp;#x2122;m playing with the spaces between a number of binaries -reality / unreality, presence / absence, embodiment / disembodiment and, ultimately, life &amp; death.

Mary Douglas suggests that these boundaries provide certainty; considering them as thresholds acknowledges them as flexible which leads to disquiet and a range of conflicting responses. She says that this ambiguity prompts not only danger, but also power.

Marcus Coates plays with boundaries too and often uses ritual to frame his work, exploring ‘a relationship to the unknowable’ and taking on the role of shaman. His work has been described as a self portrait, and that’s how I see mine.

Journey to the lower world, pre-ritual, 2004

‘(It’s) a form of social engagement which manages to be both bizarrely ridiculous yet poignant, a source of estrangement and disorientation, but equally of fascination and delight’ (Art Monthly)

My work is a provocation in two very different ways. Some of itâ&amp;#x20AC;&amp;#x2122;s transgressive and provokes conflicting responses like attraction, repulsion, horror and hilarity; some of it acts as a provocation by prompting participation, creativity, playfulness and connection. I want it all to stimulate curiosity, thought, discussion and sometimes action too.

Steven Cohen ‘All performance is ritual… it’s about Self and Other… My body is the primary material of the work.’ (Cohen, 2020)

Artist Steven Cohen says ‘All performance is ritual…(it’s) about Self and Other… My body is the primary material of the work.’ His work is controversial and is very different to mine, yet I see many similarities in intention.

Steven Cohen ‘My presence is the vehicle by which you are present.’ (Cohen, 2020)

The work I’ve found most intriguing is where he combines videos of his provocative interventions with performance and sculptural objects. Some of his work involves social engagement too. He says ‘(Through video) I can bring social realities into a … space. My presence is the vehicle by which you are present.’ He also says ‘the work&#39;s not really about death, it&#39;s about love... and life.’

Body cocoon 3 (the line where shore and water meet), August 2020

I’m planning to continue researching the themes I’ve discussed here, somehow holding it all in balance through sculpture, performance and social engagement. I’m imagining a glorious, visceral, immersive, participatory spectacle which syncretises the complexities of my practice into a coherent, interdisciplinary whole. 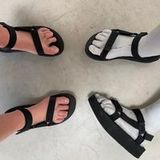