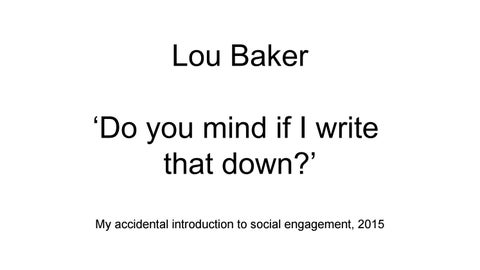 I was, frankly, rather nervous about exhibiting in this context as I imagined that most visitors would want to see beautiful, colourful, benign textile art. My abstract, hanging soft sculptures are far from that; they explore the possibilities of there being a dark side to the idea of embroidery as a gendered, decorative, safe, clean, perfect and private pursuit.

Made using skin-like materials and rough, gestural stitches, my work is troubling and emotive, with an undercurrent of dark humour. I call it the dark side of stitch. My intention was that my sculptures should be provocative and, at The Knitting and Stitching Shows, I quickly realised that I had been successful!

As the show opened I wanted just to sit and become absorbed in my knitting but I quickly realised that if I didnâ&#x20AC;&#x2122;t actively engage with the public, Iâ&#x20AC;&#x2122;d miss an unprecedented opportunity to get valuable feedback. In a gallery setting the artist might usually only be present for a couple of hours during a private view or when invigilating. In this setting I was going to be with my work from 10-5 for 9 intensive days.

Because it was so busy and I felt it was very important for me to record the responses of my public, I began to ask people, as we were talking, whether I could write down their comments. And so it began; it hadnâ&#x20AC;&#x2122;t been planned, but it became something invaluable to me â&#x20AC;&#x201C; documentation of the event and the fabulous range of responses to my work mixed in with my reflections of our conversations.

It interests me how my scrawled notes can conjure an image of the person I had been talking to, and prompt a memory of other things they said. I was thrilled with the connections I made with so many people, some with whom I am still in contact.

It also became clear that asking for permission to write down what someone has said changes the status of their comments and, sometimes, seems to gives them freedom to find their voice.

This is a record of the responses to my knitted and stitched soft sculptures, The Others, Nobody 1 and All the babies I might have had II at The Knitting and Stitching Shows in London in October, and Harrogate, November, 2015.

‘Your Search History must be tense.’

â&#x20AC;&#x2DC;No! Gushing. The violence of the phallic object. I want to take scissors to that one and slash it. It makes me so angry. It feels offensive.â&#x20AC;&#x2122; (Psychotherapist)

These are so different. It takes people out of their comfort zone as to what art and sculpture can be. It challenges views on form and style.â&#x20AC;&#x2122;

‘I’ve seen these before…in a magazine!’

‘Evil cocoons. Not nice. These are uncomfortable’

‘Be excited with this. Enjoy!’

‘You want to react; you want to zip them up and stuff them away.’

‘I don’t know, but it looks obscene to me.’ (Overheard)

‘Are they Halloween costumes?’ (Group of year 10 students)

‘Is this art? It’s too abstract for me. Fibroids? A lot of bum bags sewn together? Like a hat? A clown hat? They are a good talking point.’

‘They’re like body bags, they make me think of crematorium curtains. Memories of my husband who has passed away and was taken away in a body bag. Or hiding a body in a zipped bag like that Russian spy?’ (Recently widowed older woman)

‘Are they sleeping bags?’

‘Between sleeping and waking.’

‘Unusual. Oooh! I’ve never seen anything like this. Amazing.’

‘I’m intrigued by it but I’m not sure I like it. It’s inviting. The soft edge of the zip…. It’s not scary or mysterious exactly, it’s not going to bite. It is an uncomfortable colour combination though.’

‘It makes you think. But it’s not to my taste.’

‘This is fantasy in a way, but different. More bizarre. Zips hide things. They’re like cocoons that you retreat into. There’s a very fine line between love and hate; if you get a response, you’ve done what you’ve set out to do.’

‘What are these? I don’t like the baby one, it reminds me of my sister.’ (Little girl)

‘This is scaring me a lot!’

‘An outpouring. Red is about feelings.’

‘They’re like people, aren’t they? Brilliant. A bit creepy.’

‘I want to touch the inside, it’s like a hearth rug…. Skin – our container…. Leather is offensive to some….That one’s like a dress one might want.’

‘The hooks make me think of pieces of meat.’

‘They remind me of Soutine’s carcass.’

‘When you first look you think ‘yuk’, but then you see the softness inside.’

‘They look like body bags or coffins.’ (Woman who works in a hospice)

‘I want to climb inside.’

‘They make me think of women and fertility. Will a baby pop out? They’re womblike. At 60 I felt different, not at menopause; redundant, in a culture of youth, beauty and self-absorption.’ (60 year old woman)

‘Your people are all faceless, invisible.’

‘“Here I am, take me as you find me, warts and all.” They’re sassy. (Hand on hip) Complex. About all the different aspects to a person. The whole is greater than the sum of the parts.’

‘I want to look inside. It looks marvellous.’ (Touching) ‘Female parts. It is skin!’ (Laughing) ‘Funny.’

â&#x20AC;&#x2DC;The winner of the Great British Bake off last night, Nadine, she made a dessert like a sweet panini with cream and strawberry jam, just like your sculpture!â&#x20AC;&#x2122; (Laughing)

‘Lovely. Vaginal. Revealing and concealing. I love the scale and the red velvet with spikes. Look at Cathy Du Monchaux’s work.’

‘I haven’t seen anything like it here before. It’s different. So creative. Is it functional? Is it decorative? It’s not weird exactly, just unusual.’

‘Is it anatomy? Not sure what to make of it. It looks a bit like a shell’.

â&#x20AC;&#x2DC;As a sewing person one appreciates the processes, time, decisions. As 4 sisters we all have a different version of a memory. Which one is the true memory and are the others false memories?â&#x20AC;&#x2122; (2 of 4 sisters)

‘I get them. I do strange. I’d like to buy one but they’re too big so they’ll inspire me to make a smaller pod using crochet.’

‘The scale of these vaginas is significant!’

(Hand over mouth in horror) ‘Oh my God!’

‘Reminds me of the W.I. quilt at Olympia about F.G.M. surgery. Stitched vaginas.’

‘I congaed down the road when my daughter left home!’

‘They make me think of giving birth. Maybe that’s the placenta? Have a look at the ceramics and glass artist with a baby that was lost.’ (2 older women)

‘These remind me of Joseph Beuys’ work, although his wife did the making. Did you know that the Royal Academy started with women then kicked them out?’

‘Guilt and memory and my stash! Now my husband’s retired, I find it hard to be creative with him around.’

‘Wow! Vagina and penis! It reminds me of an old Swedish TV programme, a ballet. They’re not normally that size. Rude!’ (2 Swedish women, laughing)

‘Not sure.’ (Frown) ‘What am I looking at? (Uncomfortable. Another frown.)

‘I honestly didn’t see them as rude.’

‘Definitely women’s private bits. How could anyone not see that?’ (Smiles)

‘Oh my God. That’s quite shocking!’

â&#x20AC;&#x2DC;That one makes me think of the train of a wedding dress, heels and hobbling. Slightly more civilised than bound feet.â&#x20AC;&#x2122;

‘You’ll be easy to find with an internet search!’

‘This reminds me of ‘The Darker Side of Felt’ – the big abstract, hanging intestine-like things last year at The Knitting and Stitching Show.’

It felt like such a privilege to be part of these conversations. I met some lovely people and my work received a wonderful range of conflicting responses; much hilarity, a few tears and hugs, many, many inspiring conversations, shared stories, some disapproval, some revulsion, some horror, shock and incomprehension. I was delighted!

Many thanks to those who took the time to talk to me. These conversations have inspired me to develop my practice; now much of my work has a socially engaged element. Watch this space!

Lou Baker, 'Do you mind if I write that down?' My accidental introduction to social engagement, 2015

This is a record of the responses to my knitted and stitched soft sculptures, The Others, Nobody 1 and All the babies I might have had II at...

Lou Baker, 'Do you mind if I write that down?' My accidental introduction to social engagement, 2015

This is a record of the responses to my knitted and stitched soft sculptures, The Others, Nobody 1 and All the babies I might have had II at...