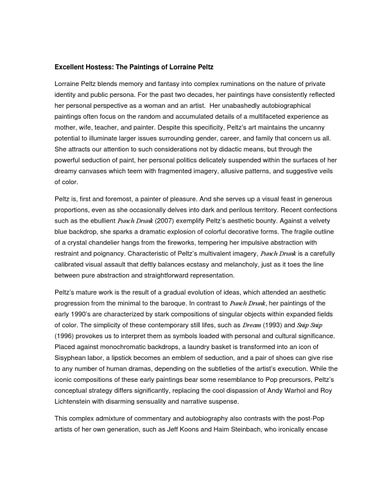 Excellent Hostess: The Paintings of Lorraine Peltz Lorraine Peltz blends memory and fantasy into complex ruminations on the nature of private identity and public persona. For the past two decades, her paintings have consistently reflected her personal perspective as a woman and an artist. Her unabashedly autobiographical paintings often focus on the random and accumulated details of a multifaceted experience as mother, wife, teacher, and painter. Despite this specificity, Peltz’s art maintains the uncanny potential to illuminate larger issues surrounding gender, career, and family that concern us all. She attracts our attention to such considerations not by didactic means, but through the powerful seduction of paint, her personal politics delicately suspended within the surfaces of her dreamy canvases which teem with fragmented imagery, allusive patterns, and suggestive veils of color. Peltz is, first and foremost, a painter of pleasure. And she serves up a visual feast in generous proportions, even as she occasionally delves into dark and perilous territory. Recent confections such as the ebullient Punch Drunk (2007) exemplify Peltz’s aesthetic bounty. Against a velvety blue backdrop, she sparks a dramatic explosion of colorful decorative forms. The fragile outline of a crystal chandelier hangs from the fireworks, tempering her impulsive abstraction with restraint and poignancy. Characteristic of Peltz’s multivalent imagery, Punch Drunk is a carefully calibrated visual assault that deftly balances ecstasy and melancholy, just as it toes the line between pure abstraction and straightforward representation. Peltz’s mature work is the result of a gradual evolution of ideas, which attended an aesthetic progression from the minimal to the baroque. In contrast to Punch Drunk, her paintings of the early 1990’s are characterized by stark compositions of singular objects within expanded fields of color. The simplicity of these contemporary still lifes, such as Dream (1993) and Snip Snip (1996) provokes us to interpret them as symbols loaded with personal and cultural significance. Placed against monochromatic backdrops, a laundry basket is transformed into an icon of Sisyphean labor, a lipstick becomes an emblem of seduction, and a pair of shoes can give rise to any number of human dramas, depending on the subtleties of the artist’s execution. While the iconic compositions of these early paintings bear some resemblance to Pop precursors, Peltz’s conceptual strategy differs significantly, replacing the cool dispassion of Andy Warhol and Roy Lichtenstein with disarming sensuality and narrative suspense. This complex admixture of commentary and autobiography also contrasts with the post-Pop artists of her own generation, such as Jeff Koons and Haim Steinbach, who ironically encase

and enshrine objects of consumption as a cultural critique. Nothing could be further from Koons’ use of the vacuum cleaner, for instance, than Peltz’s interpretation of the household appliance in the heartrending Holiday (1994), which conflates the humble form of a Dirt Devil into an image of desire and disappointment. While sympathetic to Koons’ take on the vacuum as a symbol of commodification and mechanization, Peltz also humanizes the electric appliance into a talisman of social relations. She infuses her subjects with personality and eroticism, idiosyncrasies not common to the work of many of her postmodernist peers. Having come of age as a painter in the 1980s, she shares many concerns with the cultural feminists of the time, such as Cindy Sherman and Barbara Kruger, who address identity politics and visual semantics with a new critical perspective. However, she never shies away from self-inquiry, even as she comments on larger social issues. Within the products of our common culture, she consistently attempts to locate her individual identity. Peltz again brings feminism close to home with Infinity (1994), which features a steam iron, another humble appliance portrayed not as an out-of-the-box consumer fetish, but as a real iron the artist has used in domestic chores. It is worn, and a bit outdated even at the time she executed the painting. In a clever, yet unselfconscious gesture, Peltz arranges its twisted cord loosely into the mathematical symbol for infinity, underscoring a relentless narrative of daily toil. A row of seven lipsticks, each a slightly different shade, is laid out in roll call fashion across the center of the canvas, further marking the regimen of the fin-de-siècle working girl: equal parts homemaker and woman-about-town. Peltz’s bedroom still life is carefully positioned against a shallow ground of pink, a hue that appears in her work time and again with slight, but significant variations. Pink is for Peltz an allusion to the body and to all things feminine. She imbues the traditionally meek hue with humanity and potency, just as her imagery subverts numerous sexist stereotypes. Gender roles are the prominent subject of some of her more memorable compositions such as Endgame (1993). Composed in a format that suggests the circular sweep of a clock, Peltz poses an array of shoes, each with their assigned purpose: recreation, labor, seduction, and so on. It&#39;s a portrait of womanhood in the form of multi-tasking supergirl that can fry it up in a pan when necessary. Shoes are for Peltz a perfect vehicle for human representation, a stand-in for the corporeal body, each pair a particular personality that carries the weight and memory of the woman who has worn them, who in most cases could easily be the artist herself. Without incidental detail and positioned against monochromatic surfaces, Peltz’s objects stand out as emblems emblazoned on the canvas. This compositional rigor is given additional connotations through Peltz’s interplay between realism and the tropes of formalist abstraction. By invoking postwar

painting through her monochrome backgrounds and frontal, almost geometric, presentation, Peltz parries with a gendered history of abstraction that, from Mark Rothko to Brice Marden, has carried masculine connotations. She sullies the purity of that history—and of formalism in general—by casually stamping frilly patterns, such as lips, flowers, and doilies, into the monochrome grounds. In Excellent Hostess (2002), an arrangement of chocolate cupcakes appears to ride a series of pink ellipses, placed upon white doilies, that in turn float against a field of yellow polka dots. While the store bought snacks represent a time-saver for modern mother, the layered background adds a breezy, celebratory flavor to the whole composition. It’s chocolate, its pink and it’s a party for Peltz’s Everywoman. By 2000, Peltz’s backgrounds gained equal footing to her iconic objects. The black pumps in Fantasy Island (2002) are nearly enveloped by a pattern of white daisies, an imaginary escape from a weary world. In a successive body of work featuring trendy designer boots—donated for her project by an upscale department store—Peltz explores further the cultural significance engendered by fashion. Boot paintings like Dream Girl (2004) and Flower Girl (2005) portray a wide array of possible identities: cowgirl, go-go girl, hippy chick and so on that one can slip into, if only for a night out. Although they continue a strain of thought begun with her shoe paintings a decade earlier, Peltz’s boot series proved a transitional body of work. In keeping with the buoyant subject matter, she allowed herself a greater sense of play in their execution, filling up the backgrounds with a variety of decorative motifs and pictorial fragments, from fashion accoutrements to botanical specimens, that have a tangential relationship to the featured players in her compositions. Since then, Peltz’s backgrounds have brimmed with ornamental pattern and painterly incident, infusing her images with more nuanced meanings. At times, the background becomes the sole subject of the work. In Night (2004) and Day (2004), the field of daisies first glimpsed in Fantasy Island takes over the canvas entirely into all-over pattern with hypnotic optical effect. Now without any fixed focal point, paintings such as Sweet and Sour (2006) and Greener Pastures (2007) stimulate a dynamic dialogue between objects and their surroundings, a reversal of the figure/ground relationship of her earlier work. Over the past few years, Peltz’s visual vocabulary has broadened to include a plethora of botanical motifs, geometric patterns, and inexplicable pictorial fragments. Glimpses of things remembered or imagined: a tightrope walker, coiled snake, lightning bolts, and teardrops, are stenciled, silhouetted, and outlined in the indeterminate space of these canvases. We may be compelled to “read” Peltz’s pictographic fragments—she has even punctuated a few paintings with exclamation points—but the disparate symbols in such paintings as Purple Plums (2006), Excellent Pair (2007), and Lotus

(2007) never coalesce into a single coherent narrative, but may incur any number of potential interpretations. With their dense fields of image fragments and painterly incident, these works convey a pictorial language that transcends words, a fact that Peltz underscores with the recurring outline of an empty cartoon speech bubble, a versatile new motif. As suggested by her speech bubbles and other cartoonish imagery, humor is an important aspect to Peltz’s worldview. Her work is peppered with incongruities and absurdity—a ballerina positioned on the back of a swan, for instance, or ripe fruit suggestively paired like breasts. But such playfulness has lately been tempered by darker emotions. The bone-white single blossom in Lotus contrasts poignantly with its shadowy backdrop, and the silhouette of a raven-like bird in the corner of the canvas appears by turns wistful and malevolent, representing either a faded memory or a harbinger of doom. Dance Card (2006) seems particularly elegiac in its somber hues and murky atmosphere. In this nocturne, three skeletal chandeliers hang in mid-air against a deep blue field. Empty speech bubbles crowd the bottom of the composition, barely visible except for one outlined in bright red, like a plaintive voice rising to the foreground. The delicate crystal chandelier takes center stage in her Stardust series, sometimes in groupings, at times alone against an empty proscenium. Delicately rendered in cursory outlines, Peltz’s iconic chandelier functions as an apparition, with no real power of illumination. Appearing in paintings with frequency after the death of her mother, it is hard to ignore the spiritual undertones of the spectral image. In related compositions like Mentholated Daydream (2007) and Afternoon Delight (2007), the evanescent chandelier is replaced by a speech bubbles containing the nostalgic images of a prancing faun and a high-heeled woman, as spied from a child’s point-of-view. Bursting with ornamental patterns of flowers, spirals, and abstract mandalas, these paintings celebrate the moment, even as they memorialize the past. Like Punch Drunk, which juxtaposes the fragile image of a stately chandelier against an opulent incandescent explosion, Peltz deftly balances the ecstatic and the sentimental in her multilayered images. Springing from her own personal history and private passions, her paintings represent a synthesis of diverse modes of perceiving and being, which resonate with the fractured and sutured experience of contemporary life. Even in the wake of disappointment, doubt, and loss, Peltz discovers everyday pleasures and rarified splendor, and weaves them together with rapturous results. Joe Houston Associate Curator of Contemporary Art Columbus Museum of Art, Ohio