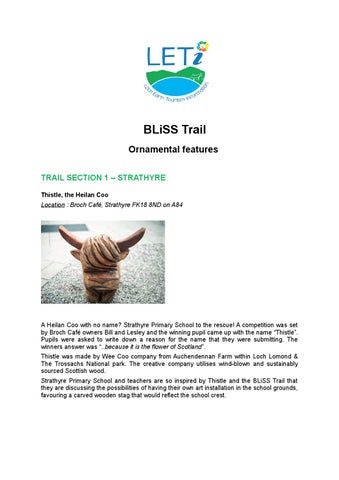 A Heilan Coo with no name? Strathyre Primary School to the rescue! A competition was set by Broch Café owners Bill and Lesley and the winning pupil came up with the name “Thistle”. Pupils were asked to write down a reason for the name that they were submitting. The winners answer was “..because it is the flower of Scotland”. Thistle was made by Wee Coo company from Auchendennan Farm within Loch Lomond &amp; The Trossachs National park. The creative company utilises wind-blown and sustainably sourced Scottish wood. Strathyre Primary School and teachers are so inspired by Thistle and the BLiSS Trail that they are discussing the possibilities of having their own art installation in the school grounds, favouring a carved wooden stag that would reflect the school crest.

A beautifully carved baby elephant, better known as the Airliephant, can be found at 4 Star Airlie House B &amp; B, a beautiful early 1900’s villa boasting views of Ben Vane, Ardnadave Hill and the surrounding countryside. You can also spot the Airliephant from the A84 or pop into the garden at the Airlie Ice Cream Parlour to savour a leisurely close-up view while tucking into an ice cream sundae or float. For information on Airlie House B &amp; B, visit www.airliehouse.co.uk

Miniature Mill House and Bridge Location: Across the Balvaig Bridge from A84, old road Strathyre.,

This miniature stone mill house and bridge sit at the entrance to a private garden, visible from the road. Local children know this as “The Fairy House”. Walk or cycle over the old stone bridge that crosses the river Balvaig from the A84. At the end of the road turn right. Look for this labour of love on the left hand side; created by Jimmy Gibson - one of Kingshouse Travel’s driving team. This single track road was once an old drovers’ road dotted with cottars houses pre-dating the Victorian layout of Strathyre as we know it today.

Guests at Creagan House, to the north of the village of Strathyre, are welcomed on arrival at the 5 Star Restaurant with Rooms by a pair of lions gracing the drive. These were installed by former owner, the late John McGregor Blain, whom it’s thought bought them at an auction at a castle or country house. It may be though that he cast them himself as he created the grand fireplace in Creagan’s imposing baronial dining hall – and this also incorporates a pair of lions made of stone from an old barn. All meals served at Creagan, which translates as &quot;rocky ground&quot; or &quot;little rocks&quot;, are served on pottery made and designed on the Isle of Skye at Westman&#39;s Pottery on the Sleat peninsular, by Elizabeth and Tom Westman. The cruets and peppermills look and feel like small rocks. The triangular plates were chosen from the portfolio to complement the style of the baronial dining hall and many pieces were decorated with the lion rampant from the shields of the seated lions on the fireplace For more details on Creagan House Restaurant with Rooms, visit www.creaganhouse.co.uk

This popular local ‘coo’ moooves around the MHOR84 Motel for different events and functions. The motel, which has been named the number two ‘Best Budget Hotel’ in the UK by The Sunday Times , can be found near cycle route 7 and the Rob Roy Way. Electric cars can also recharge here, making it the perfect pit stop at the head of Balquhidder Glen. For information on MHOR84, visit http://mhor.net/mhor-84-motel/

Old Signpost Location: Kingshouse, Balquhidder slip road off the A84

Long before the days of motor vehicles - never mind Sat Nav - travellers were relying on roadside route markers and milestones. This recently-restored, cast iron, Victorian signpost is the only one known to exist in the region. The two arm sign originally had 3 as the location used to be a T junction with the A84 running past The Kingshouse Hotel (MHOR84). One arm points to Rob Roy’s Grave 2 miles Balquhidder Braes and the other to Lochearnhead, 3

miles, Killin, 10 miles, Crianlarich, 20 miles and Oban, 61 miles. Each arm has a pointing hand. Turn off the A84 on the Kingshouse, Balquhidder slip road and you will see the signpost on the right in front of the MHOR84 car park and close to Sustrans Route 7 entrances to Lochearnhead and Strathyre.

Red Phone Box Location: Balquhidder slip road from the A84

This iconic red phone box, which has been photographed by many a walker, cyclist and visitor to the area, still works! It is located close to MHOR84 Motel, SULA Harris Tweed soft furnishing shop, Kingshouse Travel and Taxiâ&amp;#x20AC;&amp;#x2122;s, Sustrans cycle route 7 paths to Lochearnhead and Strathyre and the road to Balquhidder. Half-Way Totem Pole Location: Balquhidder back road, opposite Balquhidder Village Hall

This eye-catching and unconventional distance marker and traffic sign - created by Balquhidder local Edward Chadfield - serves an important highway code purpose on this single track road. When meeting a car coming towards you, the local rule is that whoever is furthest from the half-way point marker does the reversing.

1000 Millennium mileposts were made at the turn of the century to celebrate the National Cycle Network. This blue, cast iron mile marker seen from the A84 at Edinchip, is one of 175 that were commissioned by Sustrans for its cycle routes in Scotland. Four artists were commissioned by Sustrans to create a distinctive mile marker for the four countries of the united Kingdom. Scottish sculptor Ian McColl created Scotland’s design, known as “The Cockerel”.

Visible from the A85 in Lochearnhead, Stan stands proudly across from the B Listed, thatched-roofed Briar Cottage which overlooks the timeless beauty of Loch Earn and the surrounding mountains. Owners Kim and Fraser Proven - proud of their regal-looking stag who lights up at night against the black sky and waters of the loch - encourage their guests and visitors to take photos of Stan in different light and during the various seasons, with Stuc A Chroin, Edinample Castle and Glenample behind him. For information on Briar Cottages Self Catering visit www.stayatbriar.co.uk

•2016 shines a spotlight on Scotland’s achievements in innovation, architecture and design through a wide-ranging, variety of events and activity.

•Join the conversation at #IAD2016

For information on Travel trade From textiles and technology, to architecture, fashion, and more, the 2016 Year of Innovation, Architecture and Design, running from 1 January to 31 December shines the spotlight on Scotland’s greatest assets, icons, and hidden gems. We invite you to come and discover Scotland’s breathtaking architecture, bold design and incredible innovation during 2016! #IAD2016. Show your #ScotSpirit, Join the conversation.

Read about these fun ornamental features that complement BLiSS Trail Art installation's around Balquhidder. Lochearnhead, Strathyre and St Fillans on the A84 and A85 between Perthshire and Rural Stirling and within The Loch Lomond & The Trossachs National Park of Scotland. The trail was launched for tourism Year of Innovation, Architecture and Design. These quirky art ornaments with personality, are already popular on Social Media. Read the stories and follow the trail map to discover more. An ideal trail to use as markers for your own treasure hunt or car rally point. Follow the full trail at www.robroycountry.com/blisstrail Twitter @robroycountry #BLiSStrail #IAD2016 Now read BLiSS Art and Architechtural Installations at www.issuu.com 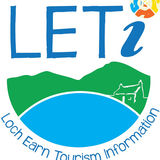