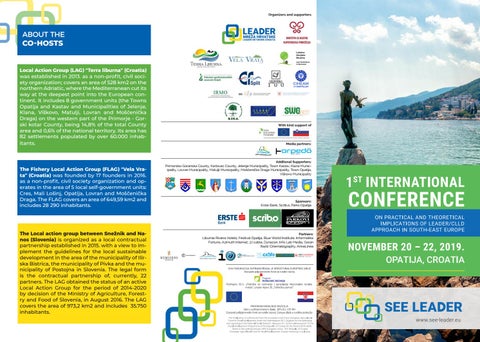 Local Action Group (LAG) “Terra liburna” (Croatia) was established in 2013. as a non-profit, civil society organization; covers an area of 528 km2 on the northern Adriatic, where the Mediterranean cut its way at the deepest point into the European continent. It includes 8 government units (the Towns Opatija and Kastav and Municipalities of Jelenje, Klana, Viškovo, Matulji, Lovran and Mošćenička Draga) on the western part of the Primorje - Gorski kotar County, being 14,8% of the total County area and 0,6% of the national territory. Its area has 82 settlements populated by over 60.000 inhabitants.

The Fishery Local Action Group (FLAG) “Vela Vrata” (Croatia) was founded by 17 founders in 2016. as a non-profit, civil society organization and operates in the area of 5 local self-government units: Cres, Mali Lošinj, Opatija, Lovran and Moščenička Draga. The FLAG covers an area of 649,59 km2 and includes 28 290 inhabitants.

The Local action group between Snežnik and Nanos (Slovenia) is organized as a local contractual partnership established in 2015. with a view to implement the guidelines for the local sustainable development in the area of the municipality of Ilirska Bistrica, the municipality of Pivka and the municipality of Postojna in Slovenia. The legal form is the contractual partnership of, currently, 22 partners. The LAG obtained the status of an active Local Action Group for the period of 2014-2020 by decision of the Ministry of Agriculture, Forestry and Food of Slovenia, in August 2016. The LAG covers the area of 973,2 km2 and includes 35.750 inhabitants.

With kind support of

SEE LEADER aims to recognize the uniqueness of the community-led local development approach for integrated territorial development in South-East Europe, demonstrating the results of past years of implementation and proactively looking at its future.

SEE LEADER objectives are to provide scholars and practitioners overview and contribution to the implementation of LEADER/CLLD in South Eastern Europe, so as to: • Further foster, strengthen and catalyse awareness of local development stakeholders, local action groups, experts and decision-makers (managing and implementing bodies). • Demonstrate that the development of LEADER/ CLLD should be based on local communities innovation and resources. Emphasize the need to embed it in the contributions and recommendations stemming from academic research and hands on experience of LEADER communities. • Contribute to a creation of a common framework for LEADER/CLLD implementation for the next programming period by historical context of LEADER and the countries it is being implemented in, benefit for the local communities in the examples of good practices and European Commission’s guidelines for the post-2020 period. • This conference aim is to propose the quadruple helix outlook to the overall CLLD in Europe. Aside its importance linked to the SEE countries in positioning for the present program implemen tation and the next programming period nego tiation and planning, it tackles the challanges of the new rural agenda and the European Green Deal shedding a new light on the discus sion regarding the position and impact of LEADER within its current framework.

THE KEYNOTE SPEAKERS The keynote speakers are divided between the academics that have been working on LEADER, such as Pascal Chevalier, practitioners that have kick-started it, such as Yves Chempatier, the administration that has been framing it, such as Karolina Jasinska-Mühleck from DG Agri and Pedro Brosei, representative of FARNET, that is linking it all together in the form of a support service. Natalija Bogdanov from the University of Belgrade, member of the Regional Rural Development Standing Working Group in South-Eastern Europe, Krzysztof Kwatera from the Polish LAGs Network, Bojana Markotić Krstinić, from the LEADER Network Croatia and Aleš Zidar from the Slovenian Network for Rural Development will present overview of LEADER/CLLD implementation in Western Balkan and SEE Member states emphasize on major challenges and the solutions found to overcome these challenges.

SEE LEADER NETWORKING FAIR SEE LEADER Networking Fair provides its participants the opportunity to exchange ideas between areas or actors with similar characteristics or resources and to identify potential topics of mutual interest, as well as joint learning opportunities. Networking is an integral part of LEADER. Transnational and inter-territorial cooperation have become increasingly important for rural stakeholders. Substantial experience gathered during previous generations of LEADER demonstrate that cooperation is an effective mechanism for helping rural areas to jointly develop and share new solutions to common issues.

The LEADER Network Croatia was established in 2012. as a national non-governmental association of Local Action Groups and support organizations/ institutions exclusively from the public and civil sectors for the development of rural/fisheries areas, operating at the national level and providing expert assistance to local development stakeholders. The Slovenian Rural Development Network, since 2002. operates as a national NGO network of Slovenian LAGs for the development of Slovenian rural areas, awarded with the status of an association operating in the public interest in the field of agriculture. It’s fields of operation are informing, training and promotion; national CLLD contact point, representation, nationwide networking and international cooperation.