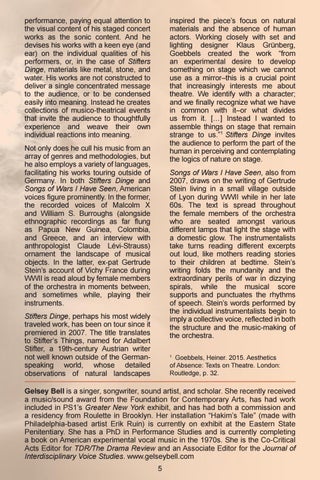 performance, paying equal attention to the visual content of his staged concert works as the sonic content. And he devises his works with a keen eye (and ear) on the individual qualities of his performers, or, in the case of Stifters Dinge, materials like metal, stone, and water. His works are not constructed to deliver a single concentrated message to the audience, or to be condensed easily into meaning. Instead he creates collections of musico-theatrical events that invite the audience to thoughtfully experience and weave their own individual reactions into meaning.

inspired the piece’s focus on natural materials and the absence of human actors. Working closely with set and lighting designer Klaus Grünberg, Goebbels created the work “from an experimental desire to develop something on stage which we cannot use as a mirror–this is a crucial point that increasingly interests me about theatre. We identify with a character; and we finally recognize what we have in common with it–or what divides us from it. […] Instead I wanted to assemble things on stage that remain strange to us.”1 Stifters Dinge invites the audience to perform the part of the human in perceiving and contemplating the logics of nature on stage.

Not only does he cull his music from an array of genres and methodologies, but he also employs a variety of languages, facilitating his works touring outside of Germany. In both Stifters Dinge and Songs of Wars I Have Seen, American voices figure prominently. In the former, the recorded voices of Malcolm X and William S. Burroughs (alongside ethnographic recordings as far flung as Papua New Guinea, Colombia, and Greece, and an interview with anthropologist Claude Lévi-Strauss) ornament the landscape of musical objects. In the latter, ex-pat Gertrude Stein’s account of Vichy France during WWII is read aloud by female members of the orchestra in moments between, and sometimes while, playing their instruments.

Songs of Wars I Have Seen, also from 2007, draws on the writing of Gertrude Stein living in a small village outside of Lyon during WWII while in her late 60s. The text is spread throughout the female members of the orchestra who are seated amongst various different lamps that light the stage with a domestic glow. The instrumentalists take turns reading different excerpts out loud, like mothers reading stories to their children at bedtime. Stein’s writing folds the mundanity and the extraordinary perils of war in dizzying spirals, while the musical score supports and punctuates the rhythms of speech. Stein’s words performed by the individual instrumentalists begin to imply a collective voice, reflected in both the structure and the music-making of the orchestra.

Stifters Dinge, perhaps his most widely traveled work, has been on tour since it premiered in 2007. The title translates to Stifter’s Things, named for Adalbert Stifter, a 19th-century Austrian writer not well known outside of the Germanspeaking world, whose detailed observations of natural landscapes

Gelsey Bell is a singer, songwriter, sound artist, and scholar. She recently received a music/sound award from the Foundation for Contemporary Arts, has had work included in PS1’s Greater New York exhibit, and has had both a commission and a residency from Roulette in Brooklyn. Her installation “Hakim’s Tale” (made with Philadelphia-based artist Erik Ruin) is currently on exhibit at the Eastern State Penitentiary. She has a PhD in Performance Studies and is currently completing a book on American experimental vocal music in the 1970s. She is the Co-Critical Acts Editor for TDR/The Drama Review and an Associate Editor for the Journal of Interdisciplinary Voice Studies. www.gelseybell.com 5

Dive deep into content about acclaimed theater artist and composer Heiner Goebbels around his two works: "Stifters Dinge" and "Songs of Wars I Have Seen", presented as part of the 2018 Fringe Festival, September 7-9. This playbill includes show information as well as essays by Gelsey Bell, Catriona MacLeod, and Barbara Will. 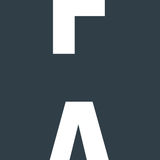