The Shawshank Redemption: The Exodus 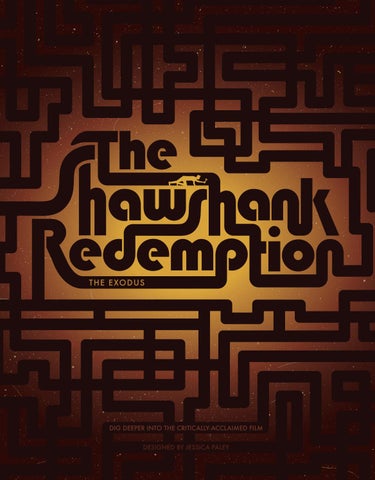 DIG DEEPER INTO THE CRITICALLY-ACCLAIMED FILM DESIGNED BY JESSICA PALEY

his claims of innocence. Life

the worse for this new inmate.

is an Oscar Award nominated,

Directed by Frank Darabont, this film is based on the 1982

seems to have taken a turn for

some of the other inmates,

Hayworth and the Shawshank

and even becomes particularly

Red, who becomes his closest

who was convicted of the

ways to live out his sentence

lover. Andy is faced with hard

Redemption. It tells the story

merchant, Andrew Dufresne, murder of his wife and her evidence against him, and is

sentenced to spend his life

in prison at the Shawshank State Penitentiary, despite

close to a character known as

with relative ease, and in the

This leaving a message for

all, that while the body may

be locked away, the spirit can

THE BEGINNING OF A FRIENDSHIP

n 1947, Andy Dufresne, a rich banker living in Maine, is convicted of murdering his wife and her lover, a golf pro. Since the state of Maine has no death penalty, he is given two consecutive life sentences and sent to notoriously harsh Shawshank State Penitentiary. Andy always claims his innocence, but his cold, measured demeanor led many to doubt his word, including the judge that convicted him.

During the first night, inmates

in the prison take bets on all the new fish, and which one

Red, who is known to run contraband inside of the walls

will be the first to crack. The

of Shawshank. He asks Red

an instrument he claims is

inmate because of his crying and hysterics. The inmate

later dies inside the infirmary

to located him a rock hammer,

necessary for his hobby of

Though the prisoners consider

because the prison doctor had

likes him from the start. Red

known as Red, bet against

hammer to engineer his escape,

one to break down first, and

other prisoners if trouble breaks,

others that Andy would be the

loses a considerable amount of

sees something in Andy, and believes Andy intends to use the or use it to rough up some of the

but when the tool arrives and he

cash. Red has been in prison

sees how small it is, Red puts

would use it as a weapon, or

wife and two other individuals.

out of Shawshank and escape.

for several years, having been sentences for the murder of his

aside the thought that Andy

could ever use it to dig his way

ndy’s a whole different animal who lived a much different life than most of the men in Shawshank. He doesn’t escape the ugliness of the prison any more than his fellow inmates, but instead of letting certain events break him, he uses them as motivation to fuel his escape. Knowing it will take twenty years to tunnel through the prison wall should seem so daunting that an inmate would be discouraged from even trying it, but that’s certainly not the case for the cold fish, stubborn ol’ Andy Dufresne.

A big part of the reason that

him out to the guards, but even

successful is because he never

the other inmates could bring

Andy’s escape was particularly trusted anyone. Even Red, his best friend in the world, never

knew a thing about his plans to hightail it out of there. The rea-

son for this was two-fold. For

one thing, the less Red knew the less he could be held accountable for assisting Andy, so in

a sense he was protecting him. Perhaps more the more import-

fort into pulling this thing off, to unnecessarily entrust a secret of that magnitude to anyone else. Red could be trusted to not rat

down. Also, we get the sense

that Andy didn’t suddenly just develop the secretive gene once he got into prison. What we

know by the type of husband he was, and how he behaved in his court trial, leads us to believe

that he was never one to show

his emotions like an open book. His emotional distance led to the demise of his marriage but

it also likely gave Andy a leg up in the slammer. He plays his

cards close to his chest, which ultimately enabled his escape.

THE MAN WHO KNOWS HOW TO GET THINGS INMATE NUMBER: GENDER: HEIGHT: WEIGHT: OCCUPATION:

llis Redding is the wise old man of Shawshank Prison. He’s Andy’s closest friend and shows him the ropes of prison life. He’s the narrator of our story, and unrolls it gradually for us. Despite being a convicted murderer, he has our sympathy from the get-go. What we have here is a kind

who made some mistakes in his

worthy man, who’s sort of the

pretty bad mistakes, and he

lack of a better description. In

just a few words, we already have the sense that we like this

Red guy. Why not? Everybody

else seems to. Who are we to go against popular opinion? Why is Red so darn good at

getting stuff—a regular “Sears and Roebuck” as he describes himself? Two reasons, really, and they both tell us quite a bit

about his character. First, he’s a smart man. He’s not just some

brainless goon who got locked

away for hacking up a bunch of innocent people with a machete. He’s a bright, resourceful fellow

past—okay, so they were some admits that he’s in Shawshank

guilty of murder, although he never divulges any of the juicy specifics—when he was young and stupid. Now though, by his character, you can tell how truly

he regrets his actions. Second,

he’s well-liked, well-known, and well-trusted. In order to

make the whole “getting things” racket run smoothly, he has to

coordinate operations with a half dozen different people inside of the prison. This requires

him to necessitate confidence in

his ability to keep mum about

their involvement and his work inside of Shawshank Prison.

THAT’S THE BEAUTY OF MUSIC

fter six years of writing letters, Andy receives a $200 check from the State of Maine for the library, along with a collection of old books and phonograph records. Though the state senate thinks this will be enough to get Andy to halt his letter-writing campaign, he is undaunted and redoubles his efforts to gain more for the prison. When the donations of the old

Andy is sent immediately to

weeks. When he gets out, he

of Figaro among the records. He

was some of the “easiest time”

books and records arrive at the

copy of Mozart’s The Marriage

locks the guard assigned to the

warden’s office in the bathroom

and plays the record over the

Mozart’s Figaro. When some

prison seems captivated by the

how unlikely that is, he replies

music. Red remarks that the

of the other prisoners tell him that hope can sustain them. Red

voices of the women in the

is not convinced and leaves,

if only for a brief time. Outside

intro made everyone feel free, of the office, Norton appears,

furious at the act of defiance,

and orders Andy to turn off the

bitter at the thought. With the

Andy begins to teach those

inmates who want to receive

After Andy is able to secure a

the volume on the phonograph

to break into the office and

and named for the late Brooks.

the needle arm at first, then turns

up. The warden orders Hadley

steady stream of funding from

the library is further renovated

WHERE THE MAGIC HAPPENS

details with his friend, Red,

they bribe him, just to keep his

prison to learn how to be a

he profits from Andy’s

Over the course of Andy’s time in prison, Norton devises a

projects which he can win by outbidding other contractors,

others get some contracts if laundering schemes seemingly

normal. Andy launders money for the warden by setting up accounts in different banks,

along with several investments, using a fake identity: “Randall Stephens.” He only shares the

noting that he had to “go to criminal.” All of the laundering scheme’s Andy works on for

the warden take place inside of his office. This is where his

wall safe resides, and where the scheme and documentation notes are recorded by Andy.

hat morning, around the

he leaves, he asks them to

same time that the Warden

escape, Andy walks into the

a big cashier’s check. Before

newspaper. Not long after, the

drop a package in the mail.

He continues his visitations

banks, ending up with almost

since Andy escaped, instead of

he had put all Warden Norton’s

to nearly a dozen other local

documentation, he closes the

books, which are then delivered

and with all of the necessary

Hadley is the first arrested for

the murder of several inmates. safe, which he hadn’t touched his books, he finds a Bible.

A BUS TOWARDS ZIHUATANEJO

t Red’s next parole hearing, one year later in 1967, he talks to the parole board about how “rehabilitated” was a made-up word, but that he regretted his actions of murder over 40 years ago. A sort of resolved defeat is in his voice as he thinks it doesn’t matter what he says to the board. His parole is granted this time around. Once released, he goes to work

sum of cash and instructions

somebody “who knew how to

at a grocery store, and stays at

had stayed in. He frequently walks by a pawn shop which

has several guns and compasses in the window. At times he

contemplates trying to get back

he has spent most of his adult life, but he remembers the

promise he made to Andy. One

day, with a compass he bought

from the pawn shop, he follows Andy’s instructions, hitchhiking

to Buxton and arriving at the stone wall Andy described. Just as Andy said, there was a large black stone. Under it was

a small box containing a large

to find him. He said he needed get things” for a “project” of

could certainly handle, given his prior occupation inside the

since no one is likely to do an

extensive manhunt for “an old

crook.” He buys a ticket at a

station near the halfway house,

and takes a bus to Fort Hancock, where he can then cross the

border into Mexico. In the very final scene of the film, the two friends are finally reunited on

the beach of Zihuatanejo on the beautiful Pacific Coast seas.

The Shawshank Redemption: The Exodus