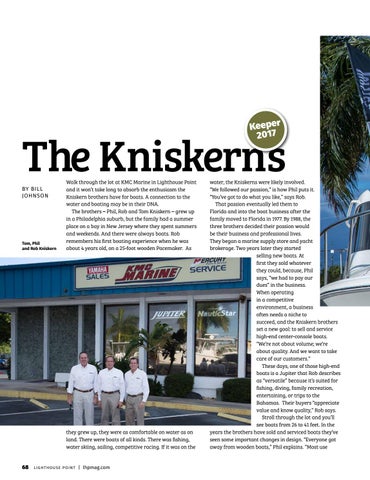 The Kniskerns BY BILL JOHNSON

Walk through the lot at KMC Marine in Lighthouse Point and it won’t take long to absorb the enthusiasm the Kniskern brothers have for boats. A connection to the water and boating may be in their DNA. The brothers – Phil, Rob and Tom Kniskern – grew up in a Philadelphia suburb, but the family had a summer place on a bay in New Jersey where they spent summers and weekends. And there were always boats. Rob remembers his first boating experience when he was about 4 years old, on a 25-foot wooden Pacemaker. As

they grew up, they were as comfortable on water as on land. There were boats of all kinds. There was fishing, water skiing, sailing, competitive racing. If it was on the

water, the Kniskerns were likely involved. “We followed our passion,” is how Phil puts it. “You’ve got to do what you like,” says Rob. That passion eventually led them to Florida and into the boat business after the family moved to Florida in 1977. By 1988, the three brothers decided their passion would be their business and professional lives. They began a marine supply store and yacht brokerage. Two years later they started selling new boats. At first they sold whatever they could, because, Phil says, “we had to pay our dues” in the business. When operating in a competitive environment, a business often needs a niche to succeed, and the Kniskern brothers set a new goal: to sell and service high-end center-console boats. “We’re not about volume; we’re about quality. And we want to take care of our customers.” These days, one of those high-end boats is a Jupiter that Rob describes as “versatile” because it’s suited for fishing, diving, family recreation, entertaining, or trips to the Bahamas. Their buyers “appreciate value and know quality,” Rob says. Stroll through the lot and you’ll see boats from 26 to 41 feet. In the years the brothers have sold and serviced boats they’ve seen some important changes in design. “Everyone got away from wooden boats,” Phil explains. “Most use 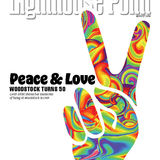