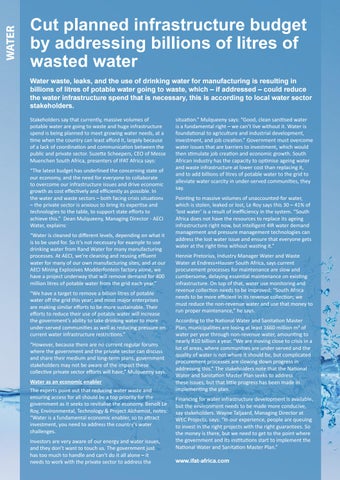 Cut planned infrastructure budget by addressing billions of litres of wasted water Water waste, leaks, and the use of drinking water for manufacturing is resulting in billions of litres of potable water going to waste, which – if addressed – could reduce the water infrastructure spend that is necessary, this is according to local water sector stakeholders. Stakeholders say that currently, massive volumes of potable water are going to waste and huge infrastructure spend is being planned to meet growing water needs, at a time when the country can least afford it, largely because of a lack of coordination and communication between the public and private sector. Suzette Scheepers, CEO of Messe Muenchen South Africa, presenters of IFAT Africa says: “The latest budget has underlined the concerning state of our economy, and the need for everyone to collaborate to overcome our infrastructure issues and drive economic growth as cost effectively and efficiently as possible. In the water and waste sectors – both facing crisis situations – the private sector is anxious to bring its expertise and technologies to the table, to support state efforts to achieve this.” Dean Mulqueeny, Managing Director - AECI Water, explains: “Water is cleaned to different levels, depending on what it is to be used for. So it’s not necessary for example to use drinking water from Rand Water for many manufacturing processes. At AECI, we’re cleaning and reusing effluent water for many of our own manufacturing sites, and at our AECI Mining Explosives Modderfontein factory alone, we have a project underway that will remove demand for 400 million litres of potable water from the grid each year.” “We have a target to remove a billion litres of potable water off the grid this year; and most major enterprises are making similar efforts to be more sustainable. Their efforts to reduce their use of potable water will increase the government’s ability to take drinking water to more under-served communities as well as reducing pressure on current water infrastructure restrictions.” “However, because there are no current regular forums where the government and the private sector can discuss and share their medium and long-term plans, government stakeholders may not be aware of the impact these collective private sector efforts will have,” Mulqueeny says. Water as an economic enabler The experts point out that reducing water waste and ensuring access for all should be a top priority for the government as it seeks to revitalise the economy. Benoît Le Roy, Environmental, Technology & Project Alchemist, notes: “Water is a fundamental economic enabler, so to attract investment, you need to address the country’s water challenges. Investors are very aware of our energy and water issues, and they don’t want to touch us. The government just has too much to handle and can’t do it all alone – it needs to work with the private sector to address the

situation.” Mulqueeny says: “Good, clean sanitised water is a fundamental right – we can’t live without it. Water is foundational to agriculture and industrial development, investment, and job creation.” Government must overcome water issues that are barriers to investment, which would then stimulate job creation and economic growth. South African industry has the capacity to optimise ageing water and waste infrastructure at lower cost than replacing it, and to add billions of litres of potable water to the grid to alleviate water scarcity in under-served communities, they say. Pointing to massive volumes of unaccounted-for water, which is stolen, leaked or lost, Le Roy says this 30 – 41% of ‘lost water’ is a result of inefficiency in the system. “South Africa does not have the resources to replace its ageing infrastructure right now, but intelligent 4IR water demand management and pressure management technologies can address the lost water issue and ensure that everyone gets water at the right time without wasting it.” Hennie Pretorius, Industry Manager Water and Waste Water at Endress+Hauser South Africa, says current procurement processes for maintenance are slow and cumbersome, delaying essential maintenance on existing infrastructure. On top of that, water use monitoring and revenue collection needs to be improved: “South Africa needs to be more efficient in its revenue collection; we must reduce the non-revenue water and use that money to run proper maintenance,” he says. According to the National Water and Sanitation Master Plan, municipalities are losing at least 1660 million m³ of water per year through non-revenue water, amounting to nearly R10 billion a year. “We are moving close to crisis in a lot of areas, where communities are under-served and the quality of water is not where it should be, but complicated procurement processes are slowing down progress in addressing this.” The stakeholders note that the National Water and Sanitation Master Plan seeks to address these issues, but that little progress has been made in implementing the plan. Financing for water infrastructure development is available, but the environment needs to be made more conducive, say stakeholders. Wayne Taljaard, Managing Director at WEC Projects, says: “In our experience, people are queuing to invest in the right projects with the right guarantees. So the money is there, but we need to get to the point where the government and its institutions start to implement the National Water and Sanitation Master Plan.” www.ifat-africa.com