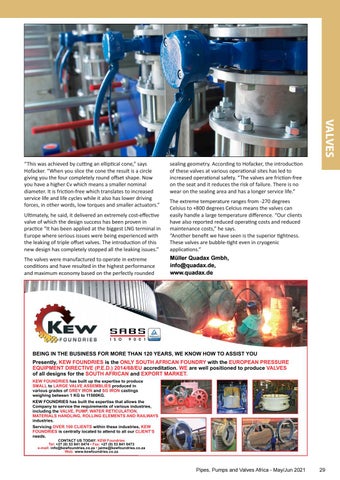 “This was achieved by cutting an elliptical cone,” says Hofacker. “When you slice the cone the result is a circle giving you the four completely round offset shape. Now you have a higher Cv which means a smaller nominal diameter. It is friction-free which translates to increased service life and life cycles while it also has lower driving forces, in other words, low torques and smaller actuators.”

sealing geometry. According to Hofacker, the introduction of these valves at various operational sites has led to increased operational safety. “The valves are friction-free on the seat and it reduces the risk of failure. There is no wear on the sealing area and has a longer service life.”

Ultimately, he said, it delivered an extremely cost-effective valve of which the design success has been proven in practice “It has been applied at the biggest LNG terminal in Europe where serious issues were being experienced with the leaking of triple offset valves. The introduction of this new design has completely stopped all the leaking issues.”

The extreme temperature ranges from -270 degrees Celsius to +800 degrees Celcius means the valves can easily handle a large temperature difference. “Our clients have also reported reduced operating costs and reduced maintenance costs,” he says. “Another benefit we have seen is the superior tightness. These valves are bubble-tight even in cryogenic applications.”

BEING IN THE BUSINESS FOR MORE THAN 120 YEARS, WE KNOW HOW TO ASSIST YOU Presently, KEW FOUNDRIES is the ONLY SOUTH AFRICAN FOUNDRY with the EUROPEAN PRESSURE EQUIPMENT DIRECTIVE (P.E.D.) 2014/68/EU accreditation. WE are well positioned to produce VALVES of all designs for the SOUTH AFRICAN and EXPORT MARKET. KEW FOUNDRIES has built up the expertise to produce SMALL to LARGE VALVE ASSEMBLIES produced in various grades of GREY IRON and SG IRON castings weighing between 1 KG to 11500KG. KEW FOUNDRIES has built the expertise that allows the Company to service the requirements of various industries, including the VALVE, PUMP, WATER RETICULATION, MATERIALS HANDLING, ROLLING ELEMENTS AND RAILWAYS industries. Servicing OVER 100 CLIENTS within these industries, KEW FOUNDRIES is centrally located to attend to all our CLIENT’S needs. CONTACT US TODAY: KEW Foundries Tel: +27 (0) 53 841 0474 • Fax: +27 (0) 53 841 0473 e-mail: info@kewfoundries.co.za • jaime@kewfoundries.co.za Web: www.kewfoundries.co.za