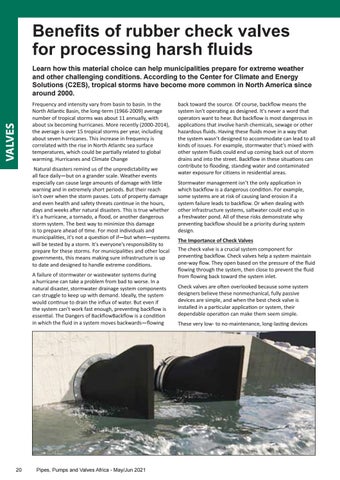 Learn how this material choice can help municipalities prepare for extreme weather and other challenging conditions. According to the Center for Climate and Energy Solutions (C2ES), tropical storms have become more common in North America since around 2000. Frequency and intensity vary from basin to basin. In the North Atlantic Basin, the long-term (1966-2009) average number of tropical storms was about 11 annually, with about six becoming hurricanes. More recently (2000-2014), the average is over 15 tropical storms per year, including about seven hurricanes. This increase in frequency is correlated with the rise in North Atlantic sea surface temperatures, which could be partially related to global warming. Hurricanes and Climate Change Natural disasters remind us of the unpredictability we all face daily—but on a grander scale. Weather events especially can cause large amounts of damage with little warning and in extremely short periods. But their reach isn't over when the storm passes. Lots of property damage and even health and safety threats continue in the hours, days and weeks after natural disasters. This is true whether it's a hurricane, a tornado, a flood, or another dangerous storm system. The best way to minimize this damage is to prepare ahead of time. For most individuals and municipalities, it's not a question of if—but when—systems will be tested by a storm. It's everyone's responsibility to prepare for these storms. For municipalities and other local governments, this means making sure infrastructure is up to date and designed to handle extreme conditions. A failure of stormwater or wastewater systems during a hurricane can take a problem from bad to worse. In a natural disaster, stormwater drainage system components can struggle to keep up with demand. Ideally, the system would continue to drain the influx of water. But even if the system can’t work fast enough, preventing backflow is essential. The Dangers of BackflowBackflow is a condition in which the fluid in a system moves backwards—flowing

back toward the source. Of course, backflow means the system isn't operating as designed. It's never a word that operators want to hear. But backflow is most dangerous in applications that involve harsh chemicals, sewage or other hazardous fluids. Having these fluids move in a way that the system wasn’t designed to accommodate can lead to all kinds of issues. For example, stormwater that’s mixed with other system fluids could end up coming back out of storm drains and into the street. Backflow in these situations can contribute to flooding, standing water and contaminated water exposure for citizens in residential areas. Stormwater management isn’t the only application in which backflow is a dangerous condition. For example, some systems are at risk of causing land erosion if a system failure leads to backflow. Or when dealing with other infrastructure systems, saltwater could end up in a freshwater pond. All of these risks demonstrate why preventing backflow should be a priority during system design. The Importance of Check Valves The check valve is a crucial system component for preventing backflow. Check valves help a system maintain one-way flow. They open based on the pressure of the fluid flowing through the system, then close to prevent the fluid from flowing back toward the system inlet. Check valves are often overlooked because some system designers believe these nonmechanical, fully passive devices are simple, and when the best check valve is installed in a particular application or system, their dependable operation can make them seem simple. These very low- to no-maintenance, long-lasting devices