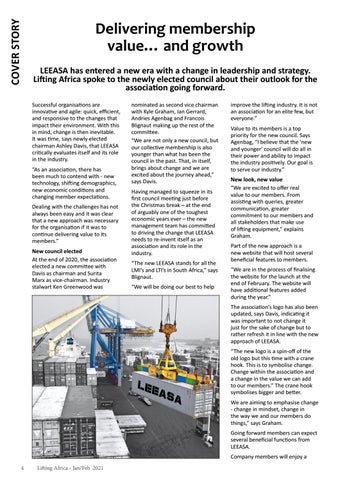 Delivering membership value… and growth LEEASA has entered a new era with a change in leadership and strategy. Lifting Africa spoke to the newly elected council about their outlook for the association going forward. Successful organisations are innovative and agile: quick, efficient, and responsive to the changes that impact their environment. With this in mind, change is then inevitable. It was time, says newly elected chairman Ashley Davis, that LEEASA critically evaluates itself and its role in the industry. “As an association, there has been much to contend with - new technology, shifting demographics, new economic conditions and changing member expectations. Dealing with the challenges has not always been easy and it was clear that a new approach was necessary for the organisation if it was to continue delivering value to its members.” New council elected At the end of 2020, the association elected a new committee with Davis as chairman and Surita Marx as vice-chairman. Industry stalwart Ken Greenwood was

nominated as second vice chairman with Kyle Graham, Ian Gerrard, Andries Agenbag and Francois Blignaut making up the rest of the committee. “We are not only a new council, but our collective membership is also younger than what has been the council in the past. That, in itself, brings about change and we are excited about the journey ahead,” says Davis. Having managed to squeeze in its first council meeting just before the Christmas break – at the end of arguably one of the toughest economic years ever – the new management team has committed to driving the change that LEEASA needs to re-invent itself as an association and its role in the industry. “The new LEEASA stands for all the LMI’s and LTI’s in South Africa,” says Blignaut. “We will be doing our best to help

improve the lifting industry. It is not an association for an elite few, but everyone.” Value to its members is a top priority for the new council. Says Agenbag, “I believe that the 'new and younger' council will do all in their power and ability to impact the industry positively. Our goal is to serve our industry.” New look, new value “We are excited to offer real value to our members. From assisting with queries, greater communication, greater commitment to our members and all stakeholders that make use of lifting equipment,” explains Graham. Part of the new approach is a new website that will host several beneficial features to members. “We are in the process of finalising the website for the launch at the end of February. The website will have additional features added during the year.” The association’s logo has also been updated, says Davis, indicating it was important to not change it just for the sake of change but to rather refresh it in line with the new approach of LEEASA. “The new logo is a spin-off of the old logo but this time with a crane hook. This is to symbolise change. Change within the association and a change in the value we can add to our members.” The crane hook symbolises bigger and better. We are aiming to emphasise change - change in mindset, change in the way we and our members do things,” says Graham. Going forward members can expect several beneficial functions from LEEASA. Company members will enjoy a